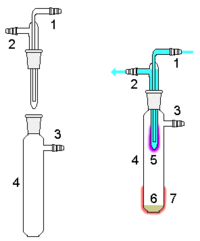 In chemistry, sublimation is the process by which a substance undergoes conversion from the solid phase to the gas phase, without going through an intermediate liquid phase. Iodine crystals and solidified carbon dioxide are examples of substances that sublimate at room temperature and regular atmospheric pressure. By contrast, at normal pressures, most chemical compounds and elements possess three different states—solid, liquid, and gas—at different temperatures. In these cases, the transition from the solid to the gaseous state requires an intermediate liquid state.[1] The antonym (opposite process) of sublimation is called deposition. The formation of frost is an example of meteorological deposition.

As mentioned above, carbon dioxide (CO2) is a common example of a chemical compound that sublimates at atmospheric pressure—a block of solid CO2 (dry ice) at room temperature and one atmosphere pressure will turn into gas without first becoming a liquid. Iodine is another substance that visibly sublimates at room temperature. In contrast to CO2, though, it is possible to obtain liquid iodine at atmospheric pressure by heating it.

Snow and other water ices also sublimate, although more slowly, at below-freezing temperatures. This phenomenon, used in freeze drying, allows a wet cloth to be hung outdoors in freezing weather and retrieved later in a dry state. Naphthalene, a common ingredient in mothballs, also sublimes slowly. Arsenic can also sublimate at high temperatures.

Some materials, such as zinc and cadmium, sublimate at low pressures. In high-vacuum applications, this phenomenon may be problematic.

Sublimation is a phase transition that occurs at temperatures and pressures below what is called the "triple point" of the substance (see phase diagram). The process is an endothermic change—that is, a change in which heat is absorbed by the system. The enthalpy of sublimation can be calculated as the enthalpy of fusion plus the enthalpy of vaporization.

Sublimation is a technique used by chemists to purify compounds. Typically a solid is placed in a vessel which is then heated under vacuum. Under this reduced pressure the solid volatilizes and condenses as a purified compound on a cooled surface, leaving the non-volatile impurities behind. This cooled surface often takes the form of a "cold finger" (shown in the diagram above). Once heating ceases and the vacuum is released, the sublimed compound can be collected from the cooled surface. Usually this is done using a sublimation apparatus‎.

Frost-free freezers are the result of having a fan and air circulation inside the freezer. The sub-zero temperature combined with the air circulation that keeps the air arid, significantly accelerates the sublimation process. This keeps freezer walls and shelves free of ice, although ice-cubes will continually sublimate.

Dye sublimation is also often used in color printing on a variety of substrates, including paper. A small heater is used to vaporize the solid dye material, which then solidifies upon the paper. As this type of printer allows extremely fine control of the primary color ratios it is possible to obtain a good quality picture even with relatively low printer resolution, as compared to other printer types of similar resolution. Standard black and white laser printers are capable of printing on plain paper using a special "transfer toner" containing sublimation dyes which can then be permanently heat transferred to T-shirts, hats, mugs, metals, puzzles and other surfaces.

In alchemy, sublimation typically refers to the process by which a substance is heated to a vapor, then immediately collects as sediment on the upper portion and neck of the heating medium (typically a retort or alembic). It is one of the 12 core alchemical processes.

In the Fast-Freeze, Deep-Etch technique, samples (for example, tissue samples) are rapidly frozen in liquid nitrogen and transferred to a vacuum device in which surface ice is sublimed. This effectively etches the sample surface, revealing the preserved 3D structure of the hydrated material. A rotary shadowed surface replica can then be obtained via electron microscopy.

Sublimation is also used to create freeze-dried substances, for example tea, soup or drugs in a process called lyophilization, which consists of freezing a solution or suspension and heating it very slowly under medium to high vacuum—specifically, a pressure lower than the vapor pressure of the solvent at its melting point. This can be well below the melting point of water if there are organic solvents or salts in the sample being freeze-dried. The resulting solid is usually much easier to dissolve or resuspend than one that is produced from a liquid system, and the low temperatures involved cause less damage to sensitive or reactive substances.