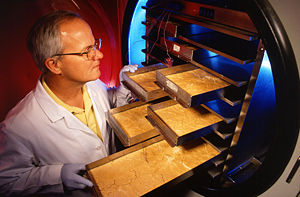 Unloading trays of freeze-dried food from a small, cabinet-type freeze-dryer.

Freeze-drying (also known as lyophilization or cryodesiccation) is a dehydration process typically used to preserve a perishable material or make the material more convenient for transport. Freeze-drying works by freezing the material and then reducing the surrounding pressure to allow the frozen water in the material to sublime directly from the solid phase to the gas phase.

The process of freeze-drying is valuable for a variety of applications. For instance, it is used to lengthen the shelf life of vaccines and other injectable materials, to preserve food, to manufacture some types of advanced ceramics, and to stabilize and store chemicals and biological materials. Some taxidermists have begun using freeze-drying to preserve pets. In a typical phase diagram, the boundary between gas and liquid runs from the triple point to the critical point. Freeze drying (blue arrow) brings the system around the triple point, avoiding the direct liquid-gas transition seen in ordinary drying (green arrow).

There are three stages in the complete freeze-drying process: freezing, primary drying, and secondary drying.

The freezing process consists of freezing the material. In a lab, this is often done by placing the material in a freeze-drying flask and rotating the flask in a bath, called a shell freezer, which is cooled by mechanical refrigeration, dry ice and methanol, or liquid nitrogen. On a larger-scale, freezing is usually done using a freeze-drying machine. In this step, it is important to cool the material below its eutectic point, the lowest temperature at which the solid and liquid phases of the material can coexist. This ensures that sublimation rather than melting will occur in the following steps. Larger crystals are easier to freeze-dry. To produce larger crystals, the product should be frozen slowly or can be cycled up and down in temperature. This cycling process is called annealing. However, in the case of food, or objects with formerly-living cells, large ice crystals will break the cell walls (discovered by Clarence Birdseye). Usually, the freezing temperatures are between −50 °C and −80 °C. The freezing phase is the most critical in the whole freeze-drying process, because the product can be spoiled if badly done.

Amorphous (glassy) materials do not have an eutectic point, but do have a critical point, below which the product must be maintained to prevent melt-back or collapse during primary and secondary drying.

During the primary drying phase, the pressure is lowered (to the range of a few millibars), and enough heat is supplied to the material for the water to sublimate. The amount of heat necessary can be calculated using the sublimating molecules’ latent heat of sublimation. In this initial drying phase, about 95 percent of the water in the material is sublimated. This phase may be slow (can be several days in the industry), because, if too much heat is added, the material’s structure could be altered.

In this phase, pressure is controlled through the application of partial vacuum. The vacuum speeds sublimation, making it useful as a deliberate drying process. Furthermore, a cold condenser chamber and/or condenser plates provide a surface(s) for the water vapor to re-solidify on. This condenser plays no role in keeping the material frozen; rather, it prevents water vapor from reaching the vacuum pump, which could degrade the pump's performance. Condenser temperatures are typically below −50 °C (−60 °F).

It is important to note that, in this range of pressure, the heat is brought mainly by conduction or radiation; the convection effect can be considered as insignificant.

The secondary drying phase aims to remove unfrozen water molecules, since the ice was removed in the primary drying phase. This part of the freeze-drying process is governed by the material’s adsorption isotherms. In this phase, the temperature is raised higher than in the primary drying phase, and can even be above 0 °C, to break any physico-chemical interactions that have formed between the water molecules and the frozen material. Usually the pressure is also lowered in this stage to encourage desorption (typically in the range of microbars, or fractions of a pascal). However, there are products that benefit from increased pressure as well.

After the freeze-drying process is complete, the vacuum is usually broken with an inert gas, such as nitrogen, before the material is sealed.

At the end of the operation, the final residual water content in the product is around one to four percent, which is extremely low.

If a freeze-dried substance is sealed to prevent the reabsorption of moisture, the substance may be stored at room temperature without refrigeration, and be protected against spoilage for many years. Preservation is possible because the greatly reduced water content inhibits the action of microorganisms and enzymes that would normally spoil or degrade the substance.

Freeze-drying also causes less damage to the substance than other dehydration methods using higher temperatures. Freeze-drying does not usually cause shrinkage or toughening of the material being dried. In addition, flavors and smells generally remain unchanged, making the process popular for preserving food. However, water is not the only chemical capable of sublimation, and the loss of other volatile compounds such as acetic acid (vinegar) and alcohols can yield undesirable results.

Freeze-dried products can be rehydrated (reconstituted) much more quickly and easily because the process leaves microscopic pores. The pores are created by the ice crystals that sublimate, leaving gaps or pores in their place. This is especially important when it comes to pharmaceutical uses. Lyophilization can also be used to increase the shelf life of some pharmaceuticals for many years.

Similar to cryoprotectants, some chemical compounds protect freeze-dried material. Known as lyoprotectants, these substances are typically polyhydroxy compounds such as sugars (mono-, di-, and polysaccharides), polyalcohols, and their derivatives. Trehalose and sucrose are natural lyoprotectants. Trehalose is produced by a variety of plant, fungi, and invertebrate animals that remain in a state of suspended animation during periods of drought (also known as anhydrobiosis). 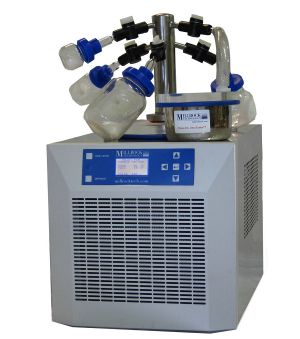 Rotary freeze-dryers are usually used with liquid products, such as pharmaceutical solutions and tissue extracts.

Manifold freeze-dryers are usually used when drying a large amount of small containers and the product will be used in a short period of time. A manifold dryer will dry the product to less than five percent moisture content. Without heat, only primary drying (removal of the unbound water) can be achieved. A heater must be added for secondary drying, which will remove the bound water and will produce a lower moisture content. 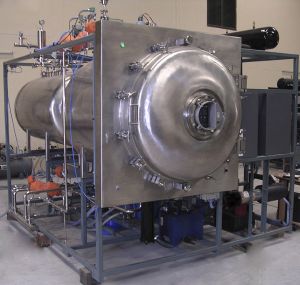 Pharmaceutical companies often use freeze-drying to increase the shelf life of products, such as vaccines and other injectables. By removing the water from the material and sealing the material in a vial, the material can be easily stored, shipped, and later reconstituted to its original form for injection.

A package of Freeze-dried ice cream, sold as a novelty item.

Freeze-drying is used to preserve food and make it very lightweight. The process has been popularized in the forms of freeze-dried ice cream, an example of astronaut food. It is also popular and convenient for hikers because the reduced weight allows them to carry more food and reconstitute it with available water. Instant coffee is sometimes freeze-dried, despite high costs of freeze-dryers. The coffee is often dried by vaporization in a hot air flow, or by projection on hot metallic plates. Freeze-dried fruit is used in some breakfast cereal. However, the freeze-drying process is used more commonly in the pharmaceutical industry.

In chemical synthesis, products are often lyophilized to make them more stable, or easier to dissolve in water for subsequent use.

In bioseparations, freeze-drying can be used also as a late-stage purification procedure, because it can effectively remove solvents. Furthermore, it is capable of concentrating substances with low molecular weights that are too small to be removed by a filtration membrane.

Freeze-drying is a relatively expensive process. The equipment is about three times as expensive as the equipment used for other separation processes, and the high energy demands lead to high energy costs. Furthermore, freeze-drying also has a long process time, because the addition of too much heat to the material can cause melting or structural deformations. Therefore, freeze-drying is often reserved for materials that are heat-sensitive, such as proteins, enzymes, microorganisms, and blood plasma. The low operating temperature of the process leads to minimal damage of these heat-sensitive products.

Recently, some taxidermists have begun using freeze-drying to preserve animals, such as pets.

Organizations such as the Document Conservation Laboratory at the United States National Archives and Records Administration (NARA) have done studies on freeze-drying as a recovery method of water-damaged books and documents. While recovery is possible, restoration quality depends on the material of the documents. If a document is made of a variety of materials, which have different absorption properties, expansion will occur at a non-uniform rate, which could lead to deformations. Water can also cause mold to grow or make inks bleed. In these cases, freeze-drying may not be an effective restoration method.

Advanced ceramics processes sometimes use freeze-drying to create a formable powder from a sprayed slurry mist. Freeze-drying creates softer particles with a more homogenous chemical composition than traditional hot spray-drying, but it is also more expensive.

In high-altitude environments, the low temperatures and pressures can sometimes produce natural mummies by a process of freeze-drying.