The sublime, in aesthetics (from the Latin sublimis, [looking up from] under the lintel, high, lofty, elevated, exalted), is the quality of greatness or vast magnitude, whether physical, moral, intellectual, metaphysical, or artistic. The term especially refers to a greatness with which nothing else can be compared and which is beyond all possibility of calculation, measurement, or imitation. This greatness is often used when referring to nature and its vastness.

The first study of the value of the sublime is the treatise ascribed to Longinus: On the Sublime. For Longinus, the sublime is an adjective that describes great, elevated, or lofty thought or language. As such, the sublime inspires awe and veneration.

Prior to the eighteenth century, sublime was a term of rhetoric predominantly relevant to literary criticism. Edmund Burke and Immanuel Kant both investigated the subject (Burke’s Essay on the Sublime and Beautiful, 1756, and Kant's Observations on the Feeling of the Beautiful and Sublime, 1764). Both philosophers distinguished the sublime from the beautiful. Later writers, ignoring the distinction, tend to conflate the sublime with the beautiful. 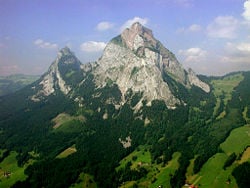 The development of the concept of the sublime as an aesthetic quality in nature distinct from beauty was first brought into prominence in the eighteenth century, in the writings of Anthony Ashley Cooper, third earl of Shaftesbury, and John Dennis, in expressing an appreciation of the fearful and irregular forms of external nature, and Joseph Addison's synthesis of Cooper's and Dennis' concepts of the sublime in his, The Spectator (1711), and later the Pleasures of the Imagination. All three Englishmen had, within the span of several years, made the journey across the Alps and commented in their writings of the horrors and harmony of the experience, expressing a contrast of aesthetic qualities.[1]

John Dennis was the first to publish his comments in a journal letter, published as Miscellanies in 1693, giving an account of crossing the Alps where, contrary to his prior feelings for the beauty of nature as a "delight that is consistent with reason," the experience of the journey was at once a pleasure to the eye as music is to the ear, but "mingled with Horrours, and sometimes almost with despair."[2] Shaftesbury had made the journey two years prior to Dennis but did not publish his comments until 1709, in the Moralists. His comments on the experience also reflected pleasure and repulsion, citing a "wasted mountain" that showed itself to the world as a "noble ruin" (Part III, Sec. 1, 390-91), but his concept of the sublime in relation to beauty was one of degree rather than the sharp contradistinction that Dennis developed into a new form of literary criticism. Shaftesbury's writings reflect more of a regard for the awe of the infinity of space ("Space astonishes," referring to the Alps), where the sublime was not an aesthetic quality in opposition to beauty, but a quality of a grander and higher importance than beauty. In referring to the Earth as a "Mansion-Globe" and "Man-Container," Shaftsbury writes, "How narrow then must it appear compar'd with the capacious System of its own Sun…tho animated with a sublime Celestial Spirit…" (Part III, sec. 1, 373).[3]

Joseph Addison embarked on the Grand Tour in 1699, and commented in the Spectator (1712) that, "The Alps fill the mind with an agreeable kind of horror." The significance of Addison's concept of the sublime is that the three pleasures of the imagination that he identified; greatness, uncommonness, and beauty, "arise from visible objects" (sight rather than rhetoric). It is also notable that in writing on the "Sublime in external Nature," he does not use the term "sublime," but uses terms that would be considered as absolutive superlatives; for example, "unbounded," "unlimited," as well as "spacious," "greatness," and on occasion terms denoting excess.

Addison's notion of greatness was integral to the concept of the sublime. An art object could be beautiful but it could not rise to greatness. His work Pleasures of the Imagination, as well as Mark Akenside's Pleasures of the Imagination (1744), and Edward Young's Night Thoughts (1745), are generally considered as the starting points for Edmund Burke's concept of the sublime in A Philosophical Inquiry into the Origin of Our Ideas of the Sublime and Beautiful (1756). Burke was the first philosopher to argue that the sublime and the beautiful are mutually exclusive. The dichotomy is not as simple as Dennis' opposition, but antithetical to the same degree as light and darkness. Beauty may be accentuated by light, but either intense light or darkness (the absence of light) is sublime to the degree that it can obliterate the sight of an object. The imagination is moved to awe and instilled with a degree of horror by what is "dark, uncertain, and confused."[4] While the relationship of the sublime and the beautiful is one of mutual exclusiveness, either one can produce pleasure. The sublime may inspire horror, but one receives pleasure in knowing that the perception is a fiction.[5]

Burke's concept of the sublime was an antithetical contrast to the classical notion of the aesthetic quality of beauty as the pleasurable experience described by Plato in several of his dialogues (Philebus, Ion, Hippias Major, and Symposium) and suggested ugliness as an aesthetic quality in its capacity to instill feelings of intense emotion, ultimately creating a pleasurable experience.[6] Prior to Burke, the classical notion of the ugly, most notably related in the writings of Augustine of Hippo, had conceived it as lacking form and therefore as non-existent. Beauty was, for St. Augustine, the consequence of the benevolence and goodness of God's creation, and as a category had no opposite. The ugly, lacking any attributive value, was a formlessness in its absence of beauty.[7]

For Aristotle, the function of art forms was to create pleasure, and he had first pondered the problem of an object of art representing the ugly as producing "pain" (without reference to the absence of pleasure) in the Poetics. Aristotle's detailed analysis of this problem involves his study of tragic literature and its paradoxical nature to be shocking as well as having poetic value.[8] 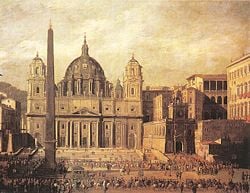 Viviano Codazzi: Rendition of St. Peter's Square, Rome, dated 1630. Kant referred to St. Peter's as "splendid," a term he used for objects producing feeling for both the beautiful and the sublime.

Kant, in 1764, made an attempt to record his thoughts on the observing subject's mental state in Observations on the Feeling of the Beautiful and Sublime.

In his Critique of Judgment (1790),[9] Kant investigates the sublime, stating "We call that sublime which is absolutely great" (§ 25). He distinguishes between the "remarkable differences" of the Beautiful and the Sublime, noting that beauty "is connected with the form of the object," having "boundaries," while the sublime "is to be found in a formless object," represented by a "boundlessness" (§ 23). Kant then further divides the sublime into the mathematical and the dynamic, where in the mathematical "aesthetical comprehension" is not a consciousness of a mere greater unit, but the notion of absolute greatness not inhibited with ideas of limitations (§ 27). The dynamically sublime is "nature considered in an aesthetic judgment as might that has no dominion over us," and an object can create a fearfulness "without being afraid of it" (§ 28). He considers both the beautiful and the sublime as "indefinite" concepts, but where beauty relates to the "Understanding," sublime is a concept belonging to "Reason," and "shows a faculty of the mind surpassing every standard of Sense" (§ 25). For Kant, one's inability to grasp the enormity of a sublime event such as an earthquake demonstrates inadequacy of one's sensibility and imagination. Simultaneously, one's ability to merely identify such an event as singular and whole indicates the superiority of one's cognitive, super-sensible powers. Ultimately, it is this "supersensible substrate," underlying both nature and thought, on which true sublimity is located.[10]

In order to clarify the concept of the feeling of the sublime, Schopenhauer listed examples of its transition from the beautiful to the most sublime. This can be found in the first volume of his, The World as Will and Representation § 39. 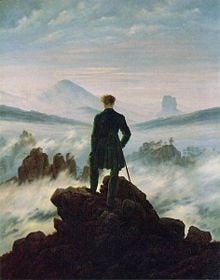 Wanderer Above the Sea of Fog by Caspar David Friedrich1817, Romantic artists during the nineteenth century used the epic of nature as an expression of the sublime

Victor Hugo touched on aspects of the sublime in both nature and humanity in many of his poems. In his preface, [11] to Cromwell'' (play), he defined the sublime as a combination of the grotesque and beautiful as opposed to the classical ideal of perfection. He also dealt with how authors and artists could create the sublime through art. Both the Hunchback and Notredame Cathedral can be considered embodiments of the sublime, as can many elements of Les Miserables.

The last decades of the nineteenth century saw the rise of Kunstwissenschaft, or the "science of art," which was a movement to discern laws of aesthetic appreciation and arrive at a scientific approach to aesthetic experience.[12]

At the beginning of the twentieth century, Neo-Kantian German philosopher and theorist of aesthetics Max Dessoir founded the Zeitschrift für Ästhetik und allgemeine Kunstwissenschaft,,which he edited for many years, and published the work, Ästhetik und allgemeine Kunstwissenschaft, in which he formulated five primary aesthetic forms: The beautiful, the sublime, the tragic, the ugly, and the comic.[13]

The experience of the sublime involves a self-forgetfulness where personal fear is replaced by a sense of well-being and security when confronted with an object exhibiting superior might, and is similar to the experience of the tragic. The "tragic consciousness" is the capacity to gain an exalted state of consciousness from the realization of the unavoidable suffering destined for all men and that there are oppositions in life that can never be resolved, most notably that of the "forgiving generosity of deity" subsumed to "inexorable fate."[14]

The sublime, as a theme in aesthetics, was the founding move of the Modernist period. Attempting to replace the beautiful with the release of the perceiver from the constraints of the human condition, these ideas were amplified in critical theory through the work of Jean-François Lyotard.[15] For Lyotard, the sublime's significance is in the way it points to an aporia in human reason; it expresses the edge of human conceptual powers and reveals the multiplicity and instability of the postmodern world.