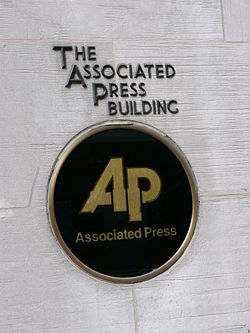 The Associated Press Building in New York City. The AP left this building in 2004.

The Associated Press, or AP, is an American news agency, the world's largest such organization. Formed in 1846, The Associated Press is governed by an elected board of directors chosen from the heads of a number of large news organizations including newspapers and broadcasters. The AP is a cooperative owned by its contributing newspapers and radio and television stations in the United States, who both contribute stories to it and use material written by its staffers. Many newspapers and broadcasters outside the United States are AP subscribers—that is, they pay a fee to use AP material, but are not members of the cooperative. Generally using a "just the facts" writing style, the AP has provided basic news coverage of events around the world to the world, and its Stylebook has become the standard "Bible" of the newspaper industry. With advances in technology, particularly the internet, the role and style of AP reporting has evolved. Thus, the AP has maintained its position as the preeminent world news agency, doing more to inform and educate the public about current events than any other single organization, a valuable contribution to establishing a world in which all people can live in peace and harmony as one human family.

The Associated Press (AP) was formed in May 1846 by representatives of five competitive New York City newspapers. After the Civil War, the owners of these newspapers realized that they, through their newspapers, were all essentially paying for the same information from their reporters. (Reporters covering the battle sites of the Civil War used the telegraph to send in their reports.) The owners of the newspapers realized that it would be cheaper to have a service collect and pay for the information once from the telegraph company. Deciding to pool resources to collect news from Europe, they formed the Harbor News Association.[1]

The driving force in its formation was Moses Yale Beach, publisher of the New York Sun, when he invited the other New York publishers to join the Sun in a cooperative venture in covering the Mexican-American War. The five New York papers joined in the agreement were the Sun, the Journal of Commerce, the Courier and Enquirer, the Herald, and the Express. Until the advent of the Industrial Revolution and the Penny Press, newspapers competed by sending reporters out in rowboats to meet the ships as they arrived in the harbor. In 1849, the Harbor News Association opened the first bureau outside the U.S., in Halifax, Nova Scotia, to meet ships from Europe before they docked in New York. In 1856, the Harbor News Association became the Associated Press.

The AP thrived under the leadership of Kent Cooper, a former reporter who joined the organization in 1910. Cooper encouraged a more effective prose style. He also facilitated the incorporation of new technology into the news dissemination process, introducing telegraph printing and the first system to transmit photographs via wire into the offices of the AP. Cooper also used his position within the AP to advocate for freedom of the press, introducing the phrase “the right to know.”[2]

As of 2005, AP's news is used by 1,700 newspapers, in addition to 5,000 television and radio outlets. Its photo library consists of more than 10 million images. The AP has 242 bureaus and serves 121 countries, with a diverse international staff drawing from all over the world. The AP Stylebook has become the de facto standard for news writing in the United States.

As part of their agreements with the Associated Press, most newspapers grant automatic permission for the AP to distribute their local news reports. For example, on page two of every edition of the Washington Post, the masthead includes the announcement, "The Associated Press is entitled exclusively to use for republication of all news dispatches credited to it or not otherwise credited in this paper and all local news of spontaneous origin published herein."

The AP has a straightforward, "just-the-facts" writing style, often using the "inverted pyramid style" of writing so that stories can be edited to fit available space in a newspaper without losing the essence of the story. The explosion of media and news outlets with the arrival of the Internet has made such concise writing less necessary, and raised the need for more feature-style writing.

The Internet has also posed a threat to AP's financial structure. On April 18, 2005, at its annual meeting, AP announced that as of 2006 it would, for the first time, begin charging separate fees for posting articles and pictures online. News outlets that buy AP's news, sports, business, and entertainment coverage were previously allowed to place the material online at no extra cost. The cooperative later reversed this plan and, in a bid to reach more readers, launched asap, a service aimed at 18–34-year-olds.

The AP's multi-topic structure has lent itself well to web portals which all have news pages which constantly need to be updated. Often, such portals rely on news services, particularly the AP, as their first source for news coverage of breaking news items. For example, Yahoo's "Top News" page gives the AP top visibility out of any news outlet. This has been of major impact to the AP's public image and role, as it gives new credence to the AP's continual mission of having staff for covering every area of news fully and promptly.

The Associated Press is also known for putting together Associated Press (AP) Polls on numerous college sports in the United States. The AP Poll is the longest-serving college football poll, having started in 1936. The AP Poll, ranking the top-25 National Collegiate Athletic Association (NCAA) Division I-A college football and Division I men's and women's college basketball teams, are the most well-known college polls. The polls are made by collecting top-25 votes of numerous designated sports journalists and then compiled at the AP office. The AP Poll in college football was particularly notable because it helped determine the ranking of teams at the end of the year for the Bowl Championship Series until the AP, citing conflict of interest, asked for the AP Poll to be removed from the Bowl Championship Series.[4] In the 2005 season, the Harris Interactive College Football Poll took its place in the formula.

The Associated Press made available for download the unclassified portions of the dossiers of 59 Guantánamo Bay detainees, which they acquired through Freedom of Information Act requests.

Some Associated Press reporters have been accused of using fake sources, in particular a purported police captain Jamil Hussein, for their reporting of sectarian violence in Iraq. The Associated Press stood by its reporting, and on January 4, 2007, the Iraqi Interior Ministry recognized Jamil as an active member of the Baghdad police force, and said he now faces arrest for talking to journalists. Ministry spokesman Abdul-Karim Khalaf, who had previously denied the existence of Hussein, acknowledged that the officer was assigned to the Khadra police station.[7] The revelation led to several apologies[8][9] for having made false accusations against The Associated Press. Others[10] [11] argued that the controversy did not end with the proof of Hussein's existence, but raised deeper questions about the work of The Associated Press in Iraq.