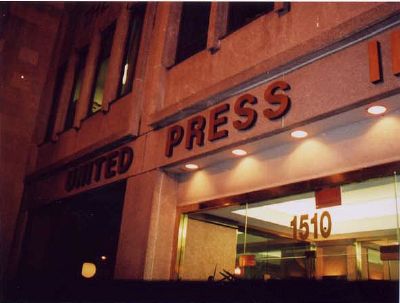 United Press International (UPI) is a global news agency, headquartered in the United States. The company was founded in 1907 by Edward W. Scripps who believed that there should not be restrictions on who could purchase news from a news service, in opposition to Associated Press (AP), which is a cooperative owned by its members who both contribute and use its stories. UPI was successful for several decades, with a large number of well respected "Unipresser" reporters associated with it. It is one of the world's major news agencies, along with the Associated Press, Agence France-Presse, and Reuters. Today, UPI is owned by News World Communications and files its news stories in English, Spanish and Arabic. UPI has offices in Washington DC, Beirut, Hong Kong, London, Santiago, Seoul, and Tokyo. Frank Bartholomew, UPI's last reporter-president, took over in 1955, obsessed with bringing Hearst's International News Service (INS) into UP. Bartholomew put the "I" in UPI on May 24, 1958, when UP and INS merged to become United Press International. Hearst, who owned King Features Syndicate, received a small share of the merged company. The new UPI had 6,000 employees and 5,000 subscribers, 1,000 of them newspapers.

Lawyers on both sides worried about anti-trust problems if King competitor, United Features Syndicate, remained a part of the newly merged company, so it was made a separate Scripps company. This deprived UPI of a persuasive sales tool and the money generated by Charles M. Schulz' popular Peanuts and other comic strips.

The Associated Press was a publishers' cooperative and could assess its members to help pay for extraordinary coverage of such events as wars, the Olympic Games, or national political conventions. UPI clients, by contrast, paid a fixed annual rate—UPI could not ask them to help shoulder any extraordinary coverage costs. Newspapers typically paid UPI about half what they paid AP in the same cities for the same services. At one point, for example, The Chicago Sun-Times paid AP $12,500 a week, but UPI only $5,000; the Wall Street Journal paid AP $36,000 a week, but UPI only $19,300.

UPI was hurt by changes in the modern news business, including the closing of many of America's afternoon newspapers, resulting in a shrinking of its customer base. CEO Arnaud de Borchgrave orchestrated UPI's exit from its last major media niche, the broadcast news business that United Press had initiated in the 1930s. He sought to shift UPI's dwindling resources into Internet-based delivery of newsletter services, focusing more on technical and diplomatic specialties than on general news.

UPI went through seven owners between 1992 and 2000, when it was finally acquired by News World Communications, owner of the Washington Times. Because News World Communications was founded by Reverend Sun Myung Moon, founder of the Unification Church, this purchase raised concerns about editorial independence. Most notable in this context was UPI's best-known reporter, Helen Thomas, who resigned her position as UPI's chief White House correspondent after 57 years.

Others, including Martin Walker, editor of UPI's English edition, a winner of Britain's Reporter of the Year award when he was Deputy Editor-in-Chief at The Guardian, said they experienced "no editorial pressure from the owners."

With investment from News World in its Arabic and Spanish-language services, UPI has stayed in business.

In 2007, as part of a restructuring to keep UPI in business and profitable, management cut 11 staff from its Washington, D.C. office and no longer has a reporter in the White House press corps or a bureau covering the United Nations. UPI spokespersons and press releases said the company would be focusing instead on expanding operations in the Middle East, Central Asia, and Africa, and reporting on security threats, intelligence, and energy issues.[1][2]

What is often considered UPI's greatest achievement is Merriman Smith's Pulitzer Prize-winning coverage of John F. Kennedy's assassination. Smith was in the press car in the front seat beside the radiotelephone. When he heard shots, he called in to the Dallas, Texas office and sent a flash bulletin: “DALLAS, NOV. 22 (UPI) – THREE SHOTS FIRED AT PRESIDENT KENNEDY’S MOTORCADE TODAY IN DOWNTOWN DALLAS.” The AP reporter, Jack Bell, was pounding on his back, yelling for the phone but Smith hung on to it while the office took down the details. [4]

UPI photographers saw their work published in hundreds of publications worldwide, including LIFE, LOOK, and othermagazines, as well as newspapers in the United States. Under their work, the only credit line was "UPI." Not until after the 1970s, when their names began appearing under their pictures, did a number of UPI's photographers achieve celebrity within the journalism community. David Hume Kennerly won a Pulitzer Prize for Vietnam coverage. Tom Gralish won a Pulitzer Prize and the Robert F. Kennedy Journalism Award in 1986 after leaving UPI for The Philadelphia Inquirer. Dirck Halstead founded The Digital Journalist; Gary Haynes authored a book, Picture This! the inside story of UPI Newspictures (2006). Other well-known photographers from UPI include Joe Marquette, Darryl Heikes, Carlos Shiebeck, James Smestad, and Bill Snead.