This is a Chinese name; the family name is Bai.

Bai Juyi (Po Chü-i Chinese: 白居易; pinyin: Bái Jūyì; Wade-Giles: Pai Chüi. Pinyin Bo Juyi, 772–846) was a poet of the T'ang dynasty (618–907) in China, who espoused Confucian ideals and called for a revival of the moral themes and the straightforward style of ancient literature. He used his elegantly simple verse to protest the social evils of his day. He is notable for the accessibility of his work; he tried to use simple language and direct themes, and it is said that he rewrote any part of a poem which one of his servants was unable to understand. His poems are not cheerful, and were themed around his responsibilities as a governor of several small provinces, sympathizing with the plight of his people.

Bai Yuji wrote over 2,800 poems, which he had copied and distributed to ensure their survival. Two of his most famous works are the long narrative poems Song of Eternal Sorrow, which tells the story of Yang Guifei (楊貴妃), and Song of the Pipa Player. He is renowned in Japan as well, where he is called Haku Rakuten.

Bai Juyi was born in 772 in Xinzheng(新鄭), a small county-level city of Zhengzhou ( 鄭州) in the south of Henan ( 河南) province, to a poor but scholarly family. Bai began composing poetry at the age of five. At the age of ten he was sent away from his family to be educated near Chang'an. Because of his father's death in 794 and strained family circumstances, Bai did not take the official examinations for the bureaucracy until the late age of 28.

At the age of ten he was sent away from his family to be educated near Chang'an. He passed the jinshi degree in 800.

Bai Juyi excelled in the exams and was appointed to given a minor post at the palace library, along with another successful examination candidate and poet, Yuan Zhen (Yüan Chen). Their friendship became perhaps the most famous in Chinese history. Yuan Zhen (Chinese: 元稹; pinyin: Yuán Zhěn; Wade-Giles: Yüan Chen, 779–831), courtesy name Weizhi (微之), was an important Chinese writer and poet in the middle Tang Dynasty known for his work Yingying's Biography.

A native of Luoyang, Yuan was a descendant of Northern Wei's ruling elites. He lost his father at the age of eight and moved to Fengxiang, near today's Baoji, Shaanxi with his mother Lady Zheng (郑氏). Yuan began his writings at the age of fifteen. He was a member of Bai Juyi's literary circle and a key figure in the ancient literature (ku-wen) revival. He was the author of Yingying's Biography (鶯鶯傳), which was later adapted for numerous operas and songs. In 813, he wrote a grave inscription for Du Fu, which contains some of the earliest known praise for his predecessor's works.

Bai Yuji’s official career was initially successful: he was a Member of the Hanlin Academy ( 翰林院) and Reminder of the Left from 807 until 815, when he was exiled to a minor post at Chiu-chiang for remonstrating too forcefully. His career resumed when he was made Prefect of Chung-chou (818), of Hangzhou( 杭州) (822-824) and then Suzhou( 蘇州) (825-827).

In 829 he became mayor of Lo-yang, the eastern capital, but retired from that post in 833 because of illness. Bai Juyi died in 846. 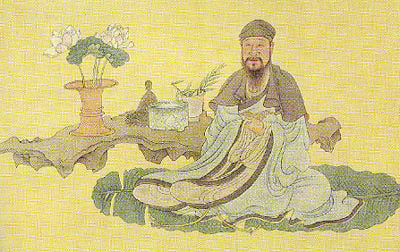 Bai Yuji wrote over 2,800 poems, which he had copied and distributed to ensure their survival. He is most notable for the accessibility of his work. It is said that he rewrote any part of a poem which one of his servants was unable to understand. He tried to use simple language and direct themes. Two of his most famous works are the long narrative poems Song of Eternal Sorrow, which tells the story of Yang Guifei (楊貴妃) , and Song of the Pipa Player. Like Du Fu ( 杜甫), he had a strong sense of social responsibility, and he is also well-known for his satirical poems, such as The Elderly Charcoal Seller. Bai Juyi's accessibility made him extremely popular in his lifetime in both China and Japan, a popularity which has continued until today.

Around himself, Bai Yuji gathered a literary circle espousing Confucian ideals, calling for a revival of the moral themes and the straightforward style of ancient literature. The group rejected the courtly trends of the time and held that literature should be an instrument of ethical and social improvement. Bai Yuji and his group revived an old ballad tradition associated with social protest, by writing hsin yüeh-fu, or “new music bureau,” ballads. Bai Yuji used his elegantly simple verse to protest the social evils of his day. His poems are not cheerful, and were themed around his responsibilities as a governor of several small provinces. He was sympathetic with the plight of his people. He is renowned in Japan as well, where he is called Haku Rakuten.

The best-known example of twin compositions in Chinese literary history is Bai Juyi’s (772–846) "Song of Eternal Sorrow" and Chen Hong’s (785–830) "An Account of the ‘Song of Eternal Sorrow’." [1] Both are based on the liaison between the Tang Emperor Xuanzong (685-762) and his beloved consort, Yang Guifei, one of the Four Beauties of ancient China (Si Mei Ren). Emperor Xuanzong preferred her over thousands of concubines and spared no expense to please her. He became infatuated and increasingly ignored the day-to-day affairs of his empire, allowing much of his power to fall into the hands of corrupt court officials, including Yan Guifei’s cousin Yang Guozhong, who became Chief Minister.

In 755, An Lu-shan, a foreign general who had been a court favorite, began the Rebellion of Anshi, taking the capital of Chang’an and declaring himself emperor. Xuanzong and his court fled to Chengdu, but along the way enraged Imperial troops, convinced that the rebellion was the fault of the Yang family, demanded the deaths of Yang Guizhong and Yang Guifei and her sisters. Yang Guifei was hanged with a silken cord and the Emperor abdicated and lived the rest of his life in seclusion, mourning his loss. Traditional Confucian historical accounts emphasized the Emperor’s irresponsibility and flagrant disregard for national affairs, which resulted in his dynasty being seriously compromised. In "Song of Eternal Sorrow," however, Bai Juyi told the story as a romantic tragedy, and transformed Emperor Xuanzong into a romantic hero. This theme was further developed in Chen Hong’s "An Account of the ‘Song of Eternal Sorrow,'" and it became the subject of numerous poems, dramas and romances. The famous Japanese romances of the Heian Period (794 – 1192), Tale of Genji (Genji Monogatari) and "The Pillow Book" (Makura no sōshi) both contain references to “Song of Eternal Sorrow.” 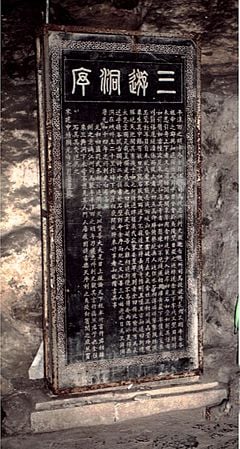 A Visit to Qiantang Lake

Gushan Temple is to the north, Jiating pavilion west,
The water's surface now is calm, the bottom of the clouds low.
In several places, the first orioles are fighting in warm trees,
By every house new swallows peck at spring mud.
Disordered flowers have grown almost enough to confuse the eye,
Bright grass is able now to hide the hooves of horses.
I most love the east of the lake, I cannot come often enough
Within the shade of green poplars on White Sand Embankment.[2]

Feelings on Watching the Moon

The times are hard: a year of famine has emptied the fields,
My brothers live abroad- scattered west and east.
Now fields and gardens are scarcely seen after the fighting,
Family members wander, scattered on the road.
Attached to shadows, like geese ten thousand li apart,
Or roots uplifted into September's autumn air.
We look together at the bright moon, and then the tears should fall,
This night, our wish for home can make five places one.[2]

The grass is spreading out across the plain,
Each year, it dies, then flourishes again.
It's burnt but not destroyed by prairie fires,
When spring winds blow they bring it back to life.
Afar, its scent invades the ancient road,
Its emerald green overruns the ruined town.
Again I see my noble friend depart,
I find I'm crowded full of parting's feelings.[2]

I was surprised my quilt and pillow were cold,
I see that now the window's bright again.
Deep in the night, I know the snow is thick,
I sometimes hear the sound as bamboo snaps.[2]

Across the world this June, the petals all have fallen,
But the mountain temple's peach blossom has just begun to bloom.
I regretted so much that spring had gone without a trace,
I didn't know that it had only moved up here.[2]

Those who speak do not know, those who know are silent,
I heard this saying from the old gentleman.
If the old gentleman was one who knew the way,
Why did he feel able to write five thousand words?[2]

I'm saddened by the peonies before the steps, so red,
As evening came I found that only two remained.
Once morning's winds have blown, they surely won't survive,
At night I gaze by lamplight, to cherish the fading red.[2]

Remembering South of the River

Sleeping on a Night of Autumn Rain

It's cold this night in autumn's third month,
Peacefully within, a lone old man.
He lies down late, the lamp already gone out,
And beautifully sleeps amid the sound of rain.
The ash inside the vessel still warm from the fire,
Its fragrance increases the warmth of quilt and covers.
When dawn comes, clear and cold, he does not rise,
The red frosted leaves cover the steps.[2]

Song of Sunset on the River

A strip of water's spread in the setting sun,
Half the river's emerald, half is red.
I love the third night of the ninth month,
The dew is like pearl; the moon like a bow.[2]

The pillow's low, the quilt is warm, the body smooth and peaceful,
Sun shines on the door of the room, the curtain not yet open.
Still the youthful taste of spring remains in the air,
Often it will come to you even in your sleep.[2]

A little child paddles a little boat,
Drifting about, and picking white lotuses.
He does not know how to hide his tracks,
And duckweed's opened up along his path.[2]