This is a Chinese name; the family name is Yang. 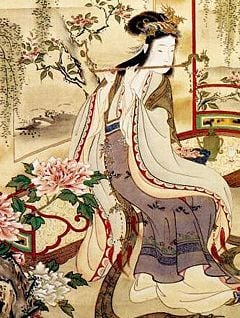 Yáng Guìfēi (Simplified Chinese: 杨贵妃; Traditional Chinese: 楊貴妃; pinyin: Yáng Guìfēi) (literally means, "precious princess consort") (June 1, 719 — July 15, 756), born Yáng Yùhuán (楊玉環), was one of the Four Beauties of ancient China (Si Mei Ren). She was the beloved consort of the Tang Emperor Xuanzong (685-762). Emperor Xuanzong preferred her over thousands of concubines and spared no expense to please her. He became infatuated and increasingly ignored the day-to-day affairs of his empire, allowing much of his power to fall into the hands of corrupt court officials, including Yan Guifei’s cousin Yang Guozhong, who became Chief Minister.

In 755, An Lu-shan, a foreign general who had been a court favorite, began the Rebellion of Anshi, taking the capital of Chang’an and declaring himself emperor. Xuanzong and his court fled to Chengdu, but along the way enraged Imperial troops, convinced that the rebellion was the fault of the Yang family, demanded the deaths of Yang Guizhong, Yang Guifei, and her sisters. Yang Guifei was hanged with a silken cord and the Emperor abdicated and lived the rest of his life in seclusion. Yang Guifei became a cultural legend and the subject of numerous books, dramas, and poems, including “Song of the Everlasting Sorrow” by the Tang poet, Bai Juyi. 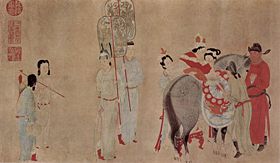 Yang was born in Yongle (永樂), Pu Prefecture (蒲州), with an ancestry in Huaying (華陰), Hongnong (弘農) (in Shaanxi) to Yang Xuanyan (楊玄琰), the sihu (司戶), a census official, in Sichuan, Shu Prefecture (蜀州). Her father died while she was very young, and she was raised in the house of her uncle. A few years after her father's death, sixteen-year old Yang married one of Emperor Xuanzong's many sons, the sixteen-year old Li Mei (李瑁), Prince Shou (壽王), and became the "princess Shou" (壽王妃).

Three years after Emperor Xuanzong's consort Wu Huifei (武惠妃) died in 737, the highly-placed eunuch adviser Gao Lishi arranged for Xuanzong to meet Yang in the Xingwen Fountain Palace (幸溫泉宮). The emperor then made Yang divorce her husband the prince and become a Taoist nun with the sobriquet Taizhen (太真 "Utmost Truth") living in Taizhen Palace. Five years later, Prince Li Mei was given another wife, the daughter of General Yuan Zhaoxun (韋昭訓), and Yang was then made a guifei (imperial consort). The Emperor Xuanzong was then sixty-one, and Yang was twenty-six.

Xuanzong was infatuated with Yang Guifei and elevated her above thousands of concubines, to their dismay. He rebuilt the ancient hot springs palace at the foot of Lishan Mountain for his consort and her sisters, naming it Huaqing Palace, and heaped honors on members of Yang’s family. Her relatives gained unprecedented influence at court. Her uncle, Xuangui, was made a senior official in the capital; her cousin, Yang Guozhong, was appointed prime minister; her elder brother, Yangxian, became an official of the second rank; and her younger brother, Yangqi was given an imperial consort as his wife. Members of the Yang family married two Li princesses and two prefects. Her sisters were all appointed to nobility:

The Emperor was a skilled musician, and Yang Guifei was a singer and dancer; together they often performed the Rainbow Feather Garment Dance. Every year at the Festival of the Cowherd and Weaver Maid, on the seventh day of the seventh lunar month (usually in August), Xuanzong pledged his eternal love to Yang. Hundreds of musicians and dancers were brought to court to entertain her.[1] Imperial messengers rode day and night to bring Yang’s favorite fruit, lychee, to Chang’an (modern Xian) from Guangzou (Canton), more than 1,500 miles to the south. (Some historians believe the fruits came from her home in modern Sichuan.)

“Her hair like a cloud, her face like a flower,
A gold hair-pin adorning her tresses.
Behind the warm lotus-flower curtain,
They took their pleasures in the spring night.
Regretting only the spring nights were too short;
Rising only when the sun was high;
He stopped attending court sessions
In the early morning.
Constantly she amused and feasted with him,
Accompanying him on his spring outings,
Spending all the nights with him.
Though many beauties were in the palace,
More than three thousand of them,
All his favors were centered upon her" (Bai Juyi, Song of the Everlasting Sorrow).

As Xuanzong turned his attention to pleasure-seeking with Yang and her family, he paid less and less attention to the running of his empire, and much of his power fell into the hands of court officials like the corrupt but competent chief minister Li Linfu (李林甫) and the influential court eunuch Gao Lishi (高力士). The political influence of the old aristocracy increased, and after 737, Li Lin-fu became a virtual dictator. From 740, the Emperor had less and less control of government affairs. 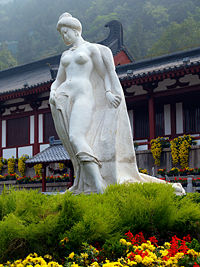 Statue of Yang Guifei bathing in Huaqing Pool, near Xi'an.

General An-Lushan, the son of a Sogdian officer and a Turkish mother from a noble family, was made a military governor of modern Heibei province in 744, by Li lin-fu, who favored foreign generals because he feared that Chinese generals might usurp his authority at court. He paid frequent visits to the capital and became a personal favorite of Xuanzong and Yang Guifei. An Lu-shan was extremely fat, and often played the jester to win favor. On one occasion, three days after his birthday, he was taken into the women’s quarters of the palace dressed as a baby, and put through a mock adoption ceremony by Yang. This type of conduct led to rumors of an inappropriate relationship between Yang and An Lu-shan. Through Yang’s patronage, An Lu-shan rose to prominence. In 750, he was honored with the title of Prince, and in 751, he was made the military governor of Hotung, giving him control of the eastern half of China’s frontier, and putting him in control of 40 percent of the Tang forces.

In 752, Li Lin-fu died and was succeeded as Chief Minister by Yang Guifei's dissolute cousin Yang Guozhong( 楊國忠, Yáng Guózhōng), who disliked An Lu-shan and actively opposed him. Around that time, An Lu-shan’s army was thoroughly defeated in a campaign against the Khitans, and China suffered other military setbacks at the hands of the Arabs in the Battle of Talus and Nanzhao in southern China. A series of natural disasters, including drought, severe storms, and floods, which caused terrible suffering among the Chinese people, were perceived as signs that Heaven was displeased with the conduct of the Emperor.

In 755, An Lu-shan took control of the northern provinces of Heibei and Henan, entered Luoyang, and proclaimed a new dynasty, initiating the Anshi Rebellion. Six months later, his forces took Chang’an. The emperor and court made their escape to Chengdu. A little more than a hundred li from the capital, at Mawei Relay Station (馬嵬驛站) (today in Xingping (興平縣), Shaanxi), the soldiers and officers accompanying the imperial party refused to move on, demanding the deaths of Yang Guozhong and Yang Guifei, whom they held responsible for the rebellion. Yang Guozhong was executed by soldiers. Rather than turn herself over to them, Yang (then thirty-eight) hanged herself, or was hanged by Gao Lishi, on a tree, with a silken cord reportedly given to her by the Emperor. The following year, the devastated Xuanzong tried to retrieve her body from the Mawei Relay Station, but no body was ever found, so a memorial tomb for her was erected in Xi. Xuanzong abdicated in favor of his son and spent the remainder of his life in retirement, mourning her loss.

“The emperor's green-canopied carriage
Was forced to halt,
Having left the west city gate
More than a hundred li.
There was nothing the emperor could do,
At the army's refusal to proceed.
So she with the moth-like eyebrows
Was killed before his horses.
Her floral-patterned gilded box
Fell to the ground, abandoned and unwanted,
Like her jade hair-pin
With the gold sparrow and green feathers" (Bai Juyi, Song of the Everlasting Sorrow).

A Japanese myth arose that she was rescued, escaped to Japan, and lived her remaining life there. In Japanese, she is known as Youkihi. In the following generation, a long poem, Song of the Everlasting Sorrow (長恨歌), was written by the Tang poet Bai Juyi, describing the Emperor's love for her and his perpetual grief at her loss; it became a classic, still memorized today by Chinese schoolchildren.

“Heaven and earth may not last for ever,
But this sorrow is eternal" (Bai Juyi, Song of the Everlasting Sorrow)

Yang Guifei is known for being slightly overweight, which was a much sought-after quality at the time. Western misinterpretation of quotes describing her beauty have often led to her being characterized as "obese." The term "obese," when used to describe Yang Guifei, must not be understood with the modern meaning of being extremely overweight. She was often compared and contrasted with another great Chinese beauty, Zhao Feiyan (趙飛燕), the beautiful wife of Emperor Cheng of Han, because Yang was known for her full build while Zhao was known for her slender build. This led to the four-character Chinese idiom, yanshou huanfei (燕瘦環肥), describing the range of the types of beauty.

Yang's story has been often retold. While some literature describes her as the author of much misfortune, other writings sympathize with her as a scapegoat. The stories about her include:

She is also well-known in Japanese literature, and Noh plays have been staged based on her story.