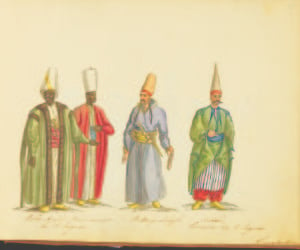 The Harem Ağası, head of the black eunuchs of the Ottoman Imperial Harem.

A eunuch is a castrated man; the term usually refers to those deliberately castrated in order to perform specific social duties that were once common in past societies. The earliest records of intentional castration for this purpose are from the Sumerian cities of Lagash in the twenty-first century B.C.E. Over the millennia since, eunuchs have performed a wide variety of functions in many different cultures, such as courtiers, treble singers, government officials, military commanders, and guardians of women or harem servants. In some societies, the notion of eunuch has been expanded to include men who are sexually impotent or are simply celibate.

The English word eunuch is from the Greek eune ("bed") and ekhein ("to keep"), effectively "bed keeper." Servants or slaves were usually castrated in order to make them safer servants of a royal court where physical access to the ruler could wield great influence—seemingly lowly domestic functions such as making the ruler's bed, bathing him, cutting his hair, carrying him in his bed or even relaying messages, giving him "the ruler's ear" could impart de facto power on the formally humble but trusted servant. Eunuchs supposedly did not have loyalties to the military, the aristocracy, nor to a family of their own (having neither offspring nor in-laws), and were thus seen as more trustworthy and less interested in establishing a private "dynasty." However, since their condition usually lowered their social status, they could also be easily replaced or killed without repercussion. In cultures that had both harems and eunuchs, the latter were sometimes used as harem servants (compare the female odalisque) or seraglio guards.

In ancient China, castration was both a traditional punishment (until the Sui Dynasty) and a means of gaining employment in the Imperial service. At the end of the Ming Dynasty, it is estimated that there were about 70,000 eunuchs (宦官 huànguān, or 太監 tàijiān) in the Imperial palace. The value of such employment—certain eunuchs gained immense power that may have superseded that of the prime ministers—was such that self-castration had to be made illegal. The number of eunuchs in Imperial employment had fallen to 470 in 1912, when their employment ceased. The justification of the placement of eunuchs as high-ranking civil servants was that, since they were incapable of having children, they would not be tempted to seize power and start a dynasty. Concurrently, a similar system existed in Vietnam.[1]

The tension between depraved eunuchs in the service of the emperor and virtuous Confucian officials resisting their tyranny is a familiar theme in Chinese history. In his History of Government, Samuel Finer points out that reality was not always that clear-cut. There were instances of very capable eunuchs, who were valuable advisers to their emperor, being resisted by "virtuous" officials. Ray Huang argues that in reality, eunuchs represented the personal will of the Emperor, while the officials represented the alternate political will of the bureaucracy. The clash between them was a clash of ideologies or political agendas.[2]

The role of eunuchs was also well established among the Greeks and Romans, although more rarely as court functionaries than in Asia. The third sex, Galli of Cybele, were considered by some to be eunuchs. In late Rome, emperors such as Constantine were surrounded by eunuchs for such functions as bathing, hair cutting, dressing, and bureaucratic functions, in effect acting as a shield between the emperor and his administrators from physical contact. Eunuchs were believed to be loyal and dispensable.

At the Byzantine imperial court, there were a great number of eunuchs employed in domestic and administrative functions, actually organized as a separate hierarchy, following a parallel career of their own. Archieunuchs—each in charge of a group of eunuchs—were among the principal officers in Constantinople, under the emperors.

It was only after the Muslim Arabs conquered parts of the Roman Empire that they acquired eunuchs from the Romans, and not knowing what else to do with them, made them into harem guards. Eunuchs played important roles in the Ottoman Great Sultan's harem (Seraglio).[3]

The hijra of India

Hijra, a Hindi term traditionally translated into English as "eunuch," actually refers to what modern Westerners would call male-to-female transgender people and effeminate homosexuals (although some of them reportedly identify as belonging to a third sex). Some of them undergo ritual castration, but the majority do not. They usually dress in saris (a traditional Indian garment worn by women) and wear heavy make-up. They typically live in the margins of society, face discrimination,[4] and earn their living in various ways (for example, by coming uninvited to weddings, births, new shop openings and other major family events and singing until they are paid or given gifts to go away).[5]

The ceremony is supposed to bring good luck and fertility, while the curse of an unappeased hijra is feared by many. Other sources of income for the hijra are begging and prostitution. The begging is accompanied by singing and dancing and the hijras usually get the money easily. Some Indian provincial officials have used the assistance of hijras to collect taxes in the same fashion; they knock on the doors of shopkeepers, while dancing and singing, and embarrass them into paying.[6] Recently, hijras have started to found organizations to improve their social condition and fight discrimination. There has even been a wave of hijra entering politics and being elected to high political positions.

Eunuchs were familiar figures in the Assyrian Empire (c. 850 through 622 B.C.E.), in the court of the Egyptian Pharaohs (down to the Lagid dynasty known as Ptolemies, ending with Cleopatra).

Among the earliest records of human religion are accounts of castration as an act of devotion, and sacred eunuchs are found in spiritual roles. Archaeological finds at Çatalhöyük, a large Neolithic town of southern Anatolia, suggest that such practices were common in the worship as far back as 7500 B.C.E., of a goddess similar perhaps to the Cybele of historical records. The Galli, later Roman followers of Cybele, also practiced ritual self-castration, known as sanguinaria. The practice is said to have continued throughout Christian times, with many of the early church (such as Origen) castrating themselves as an act of devotion, although the extent and even the existence of this practice among Christians is controversial.[7]

Tertullian, a seconnd century Church Father, described Jesus himself and Paul of Tarsus as spadones, which is translated as "eunuchs" in some contexts.[8] However, these statements can be interpreted as a metaphor for celibacy, especially given the broad meaning of the term spado in Late Antiquity.

Eunuch priests have served various goddesses from India for many centuries. Similar phenomena are exemplified by some modern Indian communities of the hijra type, which are associated with a deity and with certain rituals and festivals—notably the devotees of Yellammadevi, or jogappas, who are not castrated,[9] and the Ali of southern India, of whom at least some are.[10]

The eighteenth century Russian Skoptzy (скопцы) sect was an example of a castration cult, where its members regarded castration as a way of renouncing the sins of the flesh. Several members of the twentieth century Heaven's Gate cult were found to have been castrated, apparently voluntarily and for the same reasons.

Eunuchs castrated before puberty were also valued and trained in several cultures for their exceptional voices, which retained a childlike and other-worldly flexibility and treble pitch. Such eunuchs were known as castrati. Unfortunately, the choice had to be made at an age when the boy would not yet be able to consciously choose whether to sacrifice his sexual potency, and there was no guarantee that the voice would remain of musical excellence after the operation.

As women were sometimes forbidden to sing in Church, their place was taken by castrati. The practice, known as castratism, remained popular until the eighteenth century and was known into the nineteenth century. The last famous Italian castrato, Giovanni Velluti, died in 1861. The sole existing recording of a castrato singer documents the voice of Alessandro Moreschi, the last eunuch in the Sistine Chapel choir, who died in 1922. Unfortunately, the early twentieth century recording is of poor quality and Moreschi, who was never trained for the stage, is not considered a great singer.

According to Byzantine historian Kathryn Ringrose,[11] while the pagans of Classical Antiquity based their notions of gender in general and eunuchs in particular on physiology (the genitalia), the Byzantine Christians based them on behavior and more specifically, procreation. Hence, by Late Antiquity the term "eunuch" had come to be applied not only to castrated men, but also to a wide range of men with comparable behavior, who had "chosen to withdraw from worldly activities and thus refused to procreate".[12] The broad sense of the term "eunuch" is reflected in the compendium of Roman law created by Justinian I in the sixth century, known as the Digest or Pandects. That text distinguishes between two types of "eunuchs"—spadones (a general term denoting "one who has no generative power, an impotent person, whether by nature or by castration,"[13] and castrati (castrated males, physically incapable of procreation). Spadones are eligible to marry women, institute posthumous heirs, and adopt children (Institutions of Justinian, 1.11.9), unless they are castrati.