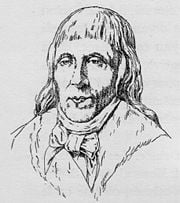 Portrait of Kondratii Selivanov (c. 1732-1832), leader and founder of the Skoptzy movement.

The Skoptsy (Russian: скопцы, also transliterated as Skoptzy, Skoptzi, Skoptsi, Scoptsy) were a secret sect of Christianity in imperial Russia, best known for practicing ritual castration of their men, and the removal of their women's breasts, in accordance with their teachings against sexual lust. The movement was first noted in the late eighteenth century in Russia. The Skoptsy were persecuted by the imperial government and later by the Soviet Union, but flourished in the early 1900s before fading into obscurity by the mid-twentieth century.

Contrary to modern practices, castration was once quite popular in many civilizations of the past; however, most religions today believe that castration goes against God's will for humanity by preventing humans from procreation.

Among the earliest records of human religion are accounts of castration as an act of devotion. Archaeological finds at Çatalhöyük, a large Neolithic town of southern Anatolia, suggest that such practices were common in the worship as far back as 7500 B.C.E. The Galli, Roman followers of Cybele, also practiced ritual self-castration, known as sanguinaria. The practice is said to have continued throughout Christian times, with many of the early church (such as Origen) castrating themselves as an act of devotion, although the extent was controversial.[1] Origen was said to have found scriptural justification for castration in the Gospel of Matthew 19:12, which says:

Tertullian, a second-century Church Father, described Jesus himself and Paul of Tarsus as spadones, which is translated as "eunuchs" in some contexts.[2] However, these statements can be interpreted as a metaphor for celibacy, especially given the broad meaning of the term spado in Late Antiquity.

The eighteenth century Russian Skoptzy (скопцы) sect was an example of a castration cult, where its members regarded castration as a way of renouncing the sins of the flesh. The Skoptsy were first discovered by the Russian civil authorities in 1771 in the Oryol region. A peasant, Andrei Ivanov, was convicted of having persuaded thirteen other peasants to castrate themselves. His assistant was another peasant, known as Kondratii Selivanov. A legal investigation followed. Ivanov was knouted and sent to Siberia. Selivanov fled, but was arrested in 1775.

Skoptsism, however, increased, and Selivanov escaped from Siberia and proclaimed himself the Son of God incarnate in the person of the late Peter III of Russia. Peter had been popular among the Raskolniks (schismatics, or dissidents) because he granted them liberty of conscience, and among the peasants because when pillaging the convents he divided their lands among the laborers. Selivanov claimed the title "God of Gods and King of Kings," and announced his accomplishment of the salvation of believers through castration.

For eighteen years he lived in Saint Petersburg, in the house of one of his disciples, receiving double homage as Christ and tsar. In 1797, he was arrested again by order of Tsar Paul I and imprisoned in a madhouse. Under Alexander I, Selivanov regained his liberty, but in 1820 was again incarcerated, this time in a monastery at Suzdal, where he died in 1832 in his hundredth year. Skoptsism was, however, not exterminated, and scandals continued to arise.

Membership in the Skoptsy sect was not restricted to the peasant class. Nobles, military and naval officers, civil servants, priests and merchants were to be found in its ranks, and its numbers were so great that 515 male and 240 female members were transported to Siberia between 1847 and 1866 without seriously threatening its existence. In 1874, the sect numbered at least 5444, including 1465 women.

Repressive measures were tried along with ridicule: male Skoptsy were dressed in women's clothes and paraded with fools' caps through the villages. To escape prosecution some of the sect emigrated, mostly to Romania, where some of them mixed with old believer exiles known as Lipovans. The well-known Romanian writer I.L. Caragiale acknowledges that toward the end of the nineteenth century all the horse-powered cabs in Bucharest were driven by Russian Skoptsy (Scopiti in Romanian). Though the law was strict in Russia—every eunuch was compelled to register—Skoptsism did not abate in its popularity.

The Skoptsy may have had as many as 100,000 followers in the early twentieth century, although repression continued and members of the sect were put on trial. Increased repression and collectivization under the Soviet Union reduced the numbers to a reported few thousand in 1929, and the sect is believed to have nearly died out today.[3]

The name "Skoptsy" is a plural of "skopets," an archaic word meaning "castrated one" in the Russian language. As their title indicates, the main feature of the sect was castration. They believed that after the expulsion from the Garden of Eden, Adam and Eve had the halves of the forbidden fruit grafted onto their bodies forming testicles and breasts. Thus, the removal of these sexual organs restored the Skoptsy to the pristine state before the Original Sin.

There were two kinds of castration: the "lesser" and "greater seal" (i.e. partial and complete castration). For men, "lesser" castration was the removal of the testicles only, while "greater" castration was the removal of the penis as well. In this act, the Skoptsy maintained that they were fulfilling Christ's counsel of perfection in Matthew 19:12 and 18:8,9. The earliest records of female castrations date from 1815. Usually the breasts only were amputated, according to the 1911 Britannica Encyclopaedia. Other accounts suggest that the labia were also removed.

The Skoptsy also believed that a chief evil of the world is rooted in the lepost (bodily beauty, human sexuality, sex appeal, etc.), which prevents people from communicating with God. The way to perfection begins with the elimination of the cause followed by the liberation of soul. Castration ensured that all sins caused by lepost could not be committed.

The Skoptsy did not absolutely condemn marriage, and some were allowed to have one child, those at Bucharest two, before being fully admitted. They were not pessimists, desiring the end of the species, but aim rather at the perfection of the individual. Their religious ceremonies include hymn-singing, addresses and frenzied dancing ending in ecstasy, like that of the Chlysty and the Muslim whirling dervishes. Strict oaths of secrecy were demanded from all members, who form a kind of mutual-aid association.

Meetings were held late at night in cellars, and last till dawn. At these the men wore long, wide, white shirts of a peculiar cut with a girdle and large white trousers. Women also dressed in white. All present wore white stockings or went barefoot. They referred to themselves as "White Doves."

The Skoptsy were millenarians, and looked for a Messiah who would establish an empire of the saints (i.e. 'the pure'). They believed that the Messiah would not come until the Skoptsy numbered 144,000 (Rev. 14:1,4), and all their efforts were directed to reaching this total. By 1911, there was said to have been a tendency on the part of many Skoptsy to consider their creed fulfilled by chaste, solitary living.