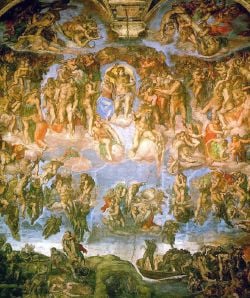 The Last Judgement - Fresco in the Sistine Chapel by Michelangelo.

The number 144,000 is a positive integer that has a special religious significance for many Christians because of its use in the biblical Book of Revelation, where it is connected to a selected elect who will attain salvation. The figure 144,000 appears three times in the New Testament: Rev. 7:3-8; Rev. 14:1; and Rev. 14:3-5. These passages have been interpreted in different ways. Some groups, such as the Jehovah's Witnesses, place a high degree of importance on this literal number while others see it as a symbolic amount denoting a mystical significance.

The spectrum of Christian theological views on the meaning of 144,000 is quite diverse. In general, four viewpoints prevail: 1) either 144,000 is a symbolic number representing all of God's chosen people to be raised up to spend eternity in heaven with God; 2) it may refer to a literal 144,000 people who will be chosen from the tribes of Israel (12,000 from each tribe) to be saved; 3) it may denote a 144,000 people from "spiritual Israel" to be be saved; or finally, 4) it may have a deeper mystical significance and symbolic meaning that is too obscure to be understood.

The number 144,000 is also significant in some New Age religious movements.

The number 144,000 is mentioned three times in the Book of Revelation in the context of an eschatological struggle between good and evil. Within this struggle, a designated group of humans (144,000) are especially enumerated for God's blessings and redemption.

The three specific biblical passages that mention the 144,000 are as follows:

"Then I looked, and behold, on Mount Zion stood the Lamb, and with him 144,000 who had his name and his Father's name written on their foreheads."

"And they were singing a new song before the throne and before the four living creatures and before the elders. No one could learn that song except the 144,000 who had been redeemed from the earth. For it is these who have not defiled themselves with women, for they are virgins. It is these who follow the Lamb wherever he goes. These have been redeemed from mankind as first fruits for God and the Lamb, and in their mouth no lie was found, for they are blameless."

The numbers 12,000 and 144,000 are variously interpreted in traditional Christianity. Some, taking the numbers in Revelation to be symbolic,[2] believe it represents all of God's people throughout history in the heavenly Church.[3] Others insist the numbers 12,000 and 144,000 are literal numbers and that the 144,000 people who are descendants of Jacob (also called Israel in the Bible) have a distinct role at the time of the end of the world.[4]

Jehovah's Witnesses distinctly believe that only 144,000 people will be raised to heaven, and will thus spend eternity with God. They do not believe that this number necessarily comes from descendants of Jacob, but from early Christians, and those of Jehovah's Witnesses who profess to be "anointed" or ("spiritual Israel").[5] Witnesses believe that the 144,000 have been selected by God from the time of Jesus' apostles through to today. They believe that the 144,000 (those having a "heavenly hope") will reign with Christ in heaven, while all other people accepted by God will live forever on a paradise earth (an "earthly hope.")

The Christian Skoptzy sect, founded in Russia in 1757 by André Ivanov, believe that the Messiah would come when the Skoptsi numbered 144,000, and all their efforts were directed toward reaching this total.