10 (ten) is a natural number[1] that follows 9 and precedes 11. It is an integer and a cardinal number, that is, a number that is used for counting.[2] In addition, it is classified as a real number,[3] distinguishing it from imaginary numbers. Ten is the base of the decimal system. It is the total number of digits on a person's two hands or two feet.

Ten is a composite number, its proper divisors being 1, 2 and 5. Ten is the smallest noncototient, a number that can not be expressed as the difference between any integer and the total number of coprimes below it.

Ten is a semi-meandric number.

Ten is the sum of the first three prime numbers and also of the first four factorials. Ten is the eighth Perrin number, preceded in the sequence by 5, 5, 7.

Ten is the number of n-Queens Problem solutions for n = 5.

Ten is the base of the decimal numeral system, by far the most common system of denoting numbers in both spoken and written language. Ten is the first two-digit number in decimal and thus the lowest number where the position of a numeral affects its value. Any integer written in the decimal system can be multiplied by ten by adding a zero to the end (e.g. 855 * 10 = 8550). The reason for the choice of ten is assumed to be that humans have ten fingers (digits). 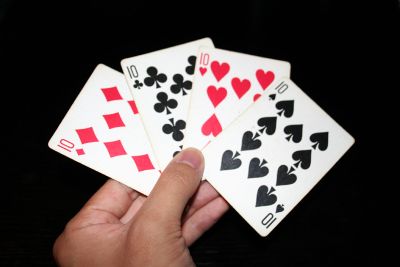 A hand holding the four 10s in a standard deck of cards: Diamonds, Clubs, Hearts, Spades.