A lunar eclipse occurs whenever the Moon passes through some portion of the Earth's shadow. This can occur only when the Sun, Earth, and Moon are aligned exactly, or very closely so, with the Earth in the middle. Hence, the Moon is always full during a lunar eclipse. The type and length of an eclipse depend upon the Moon's location relative to its orbital nodes. Lunar eclipse must have influenced ancient human civilization by challenging people's perception of the universe in the same manner as solar eclipse has—but probably to a lesser degree.

Schematic diagram of the shadow cast by a spherical object. Within the central umbra, an object is totally shielded from direct illumination. In contrast, within the penumbra, only a portion of the illumination is blocked. 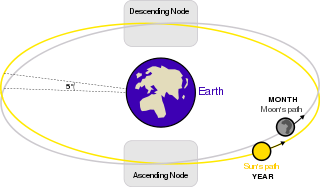 The moon crosses the ecliptic every orbit at positions called nodes. When the full moon occurs in the same position at the node, a lunar eclipse can occur. These two nodes allow two eclipses per year, separated by approximately six months.

A lunar eclipse occurs at least two times a year, whenever some portion of the Earth's shadow falls upon the Moon. The Moon will always be full during a lunar eclipse; that is, from the perspective of the Sun, the Moon will be directly behind the Earth. However, since the orbital plane of the Moon is inclined by about 5° with respect to the orbital plane of the Earth (the ecliptic), most full moons occur when the Moon is either north or south of Earth's shadow. Thus in order to be eclipsed, the Moon must be near one of the two intersection points its orbit makes with the ecliptic, which are referred to as the Moon's ascending and descending nodes.

The shadow of the Earth can be divided into two distinctive parts: the umbra and penumbra. Within the umbra, there is no direct solar radiation. However, as a result of the Sun's large angular size, solar illumination is only partially blocked in the outer portion of the Earth's shadow, which is given the name penumbra.

A partial lunar eclipse occurs when only a portion of the Moon enters the umbra. When the Moon travels completely into the Earth's umbra, one observes a total lunar eclipse. The Moon's speed through the shadow is about one kilometer per second (2300 mph), and totality may last up to nearly 107 minutes. Nevertheless, the total time between the Moon's first and last contact with the shadow is much longer, and could last up to more than six hours. The relative distance of the Moon from the Earth at the time of an eclipse can affect the eclipse's duration. In particular, when the Moon is near its apogee (that is, the farthest point from the Earth in its orbit) its orbital speed is the slowest. The diameter of the umbra does not decrease much with distance. Thus, a totally-eclipsed Moon occurring near apogee will lengthen the duration of totality.

A selenelion or selenehelion is a type of lunar eclipse when, due to the Moon's proximity to the ecliptic, both the Sun and the eclipsed Moon can be observed at the same time. This particular arrangement has led to the phenomenon being referred to as a horizontal eclipse. It can only be observed just prior to sunset or just after sunrise. The specific arrangement is not common, and last occurred on May 16, 2003, over Europe.[1]

Lunar eclipses in 2003. Two total lunar eclipses occurred in 2003. The eclipse on May 15 grazed the northern edge of the earth's shadow, and the eclipse on November 8 grazed the southern edge. These images show the eclipse in November was much brighter as the bottom rim of the Moon did not darken as much after completely entering the umbra. The color and brightness of the Moon during an eclipse varies according to the amount of light refracted by the Earth's atmosphere.

The Moon does not completely disappear as it passes through the umbra because of the refraction of sunlight by the Earth's atmosphere into the shadow cone; if the Earth had no atmosphere, the Moon would be completely dark during an eclipse. The red coloring arises because sunlight reaching the Moon must pass through a long and dense layer of the Earth's atmosphere, where it is scattered. Shorter wavelengths are more likely to be scattered by the small particles, and so by the time the light has passed through the atmosphere, the longer wavelengths dominate. This resulting light we perceive as red. This is the same effect that causes sunsets and sunrises to turn the sky a reddish color; an alternative way of considering the problem is to realize that, as viewed from the Moon, the Sun would appear to be setting (or rising) behind the Earth.

The amount of refracted light depends on the amount of dust or clouds in the atmosphere; this also controls how much light is scattered. In general, the dustier the atmosphere, the more that other wavelengths of light will be removed (compared to red light), leaving the resulting light a deeper red color. This causes the resulting coppery-red hue of the Moon to vary from one eclipse to the next. Volcanoes are notable for expelling large quantities of dust into the atmosphere, and a large eruption shortly before an eclipse can have a large effect on the resulting color (as well as producing many beautiful sunsets around the world).

The following scale (the Danjon scale) was devised by André Danjon for rating the overall darkness of lunar eclipses:[2]

Every year there are at least two lunar eclipses. If you know the date and time of an eclipse, you can predict the occurrence of other eclipses using eclipse cycles, such as the Saros cycle. Unlike a solar eclipse, which can only be viewed at a certain relatively small area of the world, a lunar eclipse may be viewed from anywhere on the night side of the Earth.