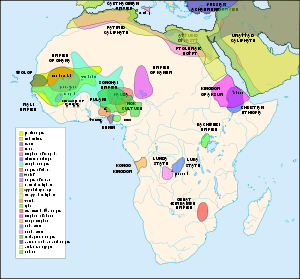 Lunda shown in the lower middle of map

The Kingdom of Lunda (c. 1665-1887), also known as the Lunda Empire was a pre-colonial African confederation of states in what is now the Democratic Republic of Congo, north-eastern Angola and northwestern Zambia. Its central state was in Katanga. The Paramount Ruler, the Mwaant Yaav, is still recognized as the chief of a "traditional state" in the Democratic Republic of the Congo. The Lunda are a Bantu-speaking people. The current chief can trace his lineage back to the sixteenth century. During the slave trade, the Lundu Empire provided a large number of captives to the Portuguese.

The empire's participation in and profit from the immoral slave trade may cloud evaluation of its legacy. Yet, for several centuries, life was stable and well-regulated for the subjects of the Mwaant Yaav. Local chiefs enjoyed considerable autonomy, the religion honored those who cared for the poor and as abhorrent as the slave trade was, the whole of Lundan society should not be judged by its role in this enterprise. Power was devolved, and the system of governance created a strong sense of unity. The Lundu Empire reminds non-Africans that well organized political and economic polities existed in Africa before colonization, and that these should be studied alongside polities that existed at the same time in the European space, and in other regions of the world. The Europe-centric view that almost all life in Africa was anarchic and organizationally unsophisticated before the white man arrived cannot be sustained.

According to Thomas, the Lunda were originally nomads who kept moving, adopting children often captured slaves rather than procreating. He describes the Lunda of this nomadic phase as "palm-wine-drinking and often cannibalistic. Later, they settled down and adopted a "conventional attitude to procreation and families."[1] Initially the core of what would become the Lunda Empire a simple village called a "gaand" in the KiLunda language. It was ruled over by a king called the Mwaanta Gaand or Mwaantaangaand. One of these rulers, Ilunga Tshibinda came from the kingdom of Luba where his brother ruled and married a princess from an area to the south.[2] Their son became the first paramount ruler of the Lunda creating the title of Mwanta Yaav, which bears his name.

According to Appiah and Gates, the Lundu were too small in number to survive by farming, so they raided neighboring villages to put captives to work in their fields. They later "colonized remote villages and forced them to pay crop tributes to the Lundu king."[2] Their role in the slave trade later led to their expansion throughout the Luapula Valley.

The Mwaat Yaav was advised by a council of royal dignitaries. Local chiefs exercised a considerable autonomy, provided they paid tribute to the Mwaat Yaav. Conquered chiefs were kept in place, and given the title Mwaant (owner of land.)[3] Power may originally have been passed on down through male line. However, possibly due to contact with an increasingly large number of matrilineal systems, succession became matrilineal.[4] The Empire "probably governed a million or more subjects."[5] Appiah and Gates describe their administrative system as "cohesive" and "complex."[2] A small police "corps enforced the king's orders around the capital" and traveling chiefs, or kawatta acted as the kings envoys to the local chiefs, collecting tribute. The most distant chiefs were visited annually.[3] These officials checked caravans, escorted "foreign travelers, and "warned chiefs whose tribute was late, or inadequate."[6] Minimal interference by the central government in the affairs of the provinces helped to keep the peace in a system where "central control" would have been "seen as exploitation."[7] One important state official was a woman, the lukonkeshia, "mother of the nation" whose job was to "entertain state visitors."[6] Birmingham says that the administrative system was "stabilized by many checks and balances."[8]

The chiefs may have combined a political and a spiritual role. The creator God was Nzambi (associated with the sky), the Bantu supreme deity, although supplication to him was made by invoking the help of ancestral spirits. Divination was practices to determine which ancestors needed to be appeased. Nzambi is said to have a particular concern for the welfare of the poor. He was the "protector of the poor."[4][9][10]

The Empire's economy was mixed, including agriculture and trade as well as hunting and fishing. Women undertook agricultural work, farming such crops as maize, yams, sorghum, squash, beans, sweet potatoes, palm oil trees, and tobacco. Trading commodities included slaves and ivory, copper and salt. Trading partners included Arabs and from the fifteenth century the Portuguese. They received weapons and textiles in return.

According to Clark, the empire thrived on the slave trade but "it is unlikely that the external trade ever rose to 3000 slaves per annum, most of whom were foreign captives."[5] The slaves were captured in the north and east and sold in the west and south-west. According to Appiah and Gates, the Lundu Empire was one of the largest suppliers of slaves;

"In 1850, a slave trade estimated that one third of all slaves traded in the previous century had been sold by the Lunda Kingdom." They "protested the end of the Portuguese slave trade on the basis that they would have to resort to killing the criminals if they could no longer sell them."[2] External trade was under the direct control of the king, who strengthened his position by distributing exotic goods to his most trusted officials.

The Lundu were skilled at making bangles and ornaments with thin copper wire, used both for decoration and as currency.[8] It is however difficult to identify a specific Lundu art tradition "because of the long history of cultural and economic interaction with their neighbors."[11]

This was a war-dance performed whenever a new village was conquered. It included drums, dance, speeches and the payment of tribute to the king. Still performed annually by the Lunda of Zambia, the festival attracts one of the largest audiences in Zambia.

The Lunda Kingdom controlled some 150,000 square kilometers by 1680. The state doubled in size to around 300,000 square kilometers at its height in the nineteenth century.[12] The Mwata Yamvos of Lunda became powerful militarily from their base of 175,000 inhabitants. Through marriage with descendants of the Luba kings, they gained political ties. The Lunda people were able to settle and colonize other areas and tribes, thus extending their empire through southwest Katanga into Angola and north-western Zambia, and eastwards across Katanga into what is now the Luapula Province of Zambia.

The strength and prosperity of the kingdom enabled its military and ruling classes to conquer other tribes, especially to the East. In the eighteenth century a number of migrations took place as far as the region to the south of Lake Tanganyika. The Bemba people of Northern Zambia descended from Luba migrants who arrived in Zambia throughout the seventeenth century. At the same time, a Lunda chief and warrior called Mwata Kazembe set up an Eastern Lunda kingdom in the valley of the Luapula River.

The kingdom of Lunda came to an end in the nineteenth century when it was invaded by the Chokwe who were armed with guns. The Chokwe then established their own kingdom with their language and customs. Lunda chiefs and people continued to live in the Lunda heartland but were diminished in power. In the Democratic Republic, the Lunda are recognized as a "traditional state."[13]

At the start of the colonial era (1884) the Lunda heartland was divided between Portuguese Angola, King Leopold II of Belgium's Congo Free State and the British in North-Western Rhodesia, which became Angola, Democratic Republic of Congo and Zambia, respectively. Lunda leaders, however, resisted Belgium rule until 1909, when they were finally defeated. The Belgians left much of the Lundu Empire in place, though, choosing to use "preexisting state structures to facilitate colonial rule" thus the Lundu "remained fairly cohesive throughout the colonial period."[14] In Zambia, another line of Lundu chiefs continues to be recognized in the Luapula Province. The Mwata Kazembe has a palace in Mwansabombwe. Mwata Kazembe XVIII was appointed a District Commissioner in 1985 and was promoted to Provincial Political Secretary in 1990.[15]

The legacy of the Lundu Empire reminds non-Africans that well organized political and economic polities did exist in Africa before colonization, and that these should be studied alongside polities that existed at the same time in the European space, and in other regions of the world. On the one hand, the Lundu Empire profited from slavery, an immoral trade. On the other hand, until there was a market for these slaves to be sold and shipped across the Atlantic Ocean to the Americas, people captured in battle were used as labor or even adopted as children. Like other people, the Lundu took part in the slave trade because it offered a lucrative source of income; it could be risky but "the profits … amounted to very tangible benefits."[5]

Yet for those who lived within the Empire, life was stable and well-regulated for centuries. Local chiefs enjoyed considerable autonomy, and the religion honored those who cared for the poor, so there was a bias against exploiting the disadvantaged. As abhorrent as the slave trade was, the whole of Lundan society should not be judged by its role in this enterprise. Power was devolved, and the system of governance created a strong sense of unity.[6]