Lumbini (Sanskrit: लुम्बिनी, "the lovely") is a Buddhist pilgrimage site in the Kapilavastu district of Nepal, near the Indian border. Buddhist tradition marks Lumbini as the place where Queen Mayadevi gave birth to Siddhartha Gautama in 563 B.C.E. Legend presents the story of Queen Mayadevi as experiencing a miraculous birth. While traveling through Lumbini and stopping in a garden, Siddhartha emerged from her side. According to the legend Mayadevi died seven days after giving birth. Numerous remarkable parallels have been noted between the birth of Siddhartha Gautama and the birth of Jesus Christ.

Lumbini is situated approximately 25 kilometers (16 mi) east of the Kapilavastu. Legend states the Buddha lived there until he was twenty nine years old. As the birth place of Siddhartha, Lumbini is one of the foremost pilgrimage sites in Buddhism. Siddhartha, as Buddha Gautama, founded the Buddhist tradition between 563 and 483 B.C.E. The great benefactor of Buddhism, Asoka the Great, erected a pillar to mark the place of Buddha's birth in Lumbini during the third century B.C.E. When Buddhism declined in India due to the re-invigoration of Hinduism and the arrival of Islam in the eighth century C.E., Lumbini became a lost site. Nepalese archaeologists rediscovered Asoka's pillar in 1896. The discovery led to the restoration of Lumbini into an active Buddhist monastery and one of the holiest pilgrimage sites in Buddhism. UNESCO designated Lumbini a World Heritage Site in 1997.

Lumbini is one of four paramount pilgrimage places related to the life of the Buddha, the others being at Kushinagar, Bodh Gaya, and Sarnath. Lumbini sits in the foothills of the Himalaya mountains,[1] twenty five kilometers east of the municipality of Kapilavastu, where tradition says that the Buddha lived until the age of twenty nine. Kapilvastu is the name of the place as well as of the neighboring district.

Lumbini has a number of temples, including the Mayadevi temple, and others under construction. Lumbini is the location of Puskarini (or Holy Pond) where the Buddha's mother took the ritual dip prior to his birth and where he, too, had his first bath. The remains of Kapilvastu palace are found there. At sites near Lumbini, according to tradition, earlier Buddhas were born, achieved ultimate awakening, and finally relinquished earthly form. 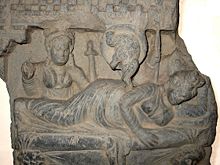 Queen Māyā of Sakya was the birth mother of the historical Gautama Buddha, Siddhārtha of the Gautama gotra, and sister of Mahapajapati Gotami the first woman ordained by the Buddha. "Māyā" means "illusion" or "enchantment" in Sanskrit and Pāli. Māyā is also called Mahāmāyā ("great Māyā") or Māyādevī ("Queen, literally 'goddess,' Māyā"). In Tibetan she is called Gyutrulma. Queen Mayadevi was born in Devadaha kingdom of ancient Nepal.

Māyā married king Śuddhodana (Pāli: Suddhodana), the ruler of the Śākya clan of Kapilvastu. She was the daughter of King Śuddhodhana's uncle and therefore his cousin; her father was king of Devadaha.

The birth of the Buddha-to-be 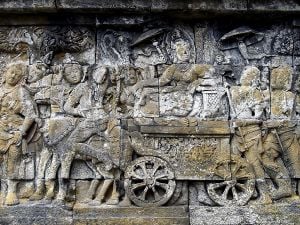 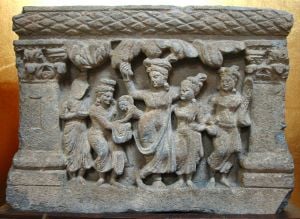 Queen Māyā and King Suddhodhana had no children twenty years into their marriage. One day, according to legend, Queen Māyā had a dream of a divine Bodhisattva on white elephant touching her side, and became pregnant. According to Buddhist tradition, the Buddha-to-be was residing as a Bodhisattva, in the Tuṣita heaven, and decided to take the shape of a white elephant to be reborn, for the last time, on Earth. Māyā gave birth to Siddharta c. 563 B.C.E. The pregnancy lasted ten lunar months.

Following custom, the Queen returned to her own home for the birth. On the way, she stepped down from her palanquin to have a walk in the beautiful flower garden of Lumbini Park, Lumbini Zone, Nepal. She was delighted by the park and she reached for a branch to take a rest. Again according to legend, at that time Prince Siddhārtha emerged from her right side and was born on the eighth day of April. She gave him his first bath in the Puskarini pond in Lumbini Zone. Siddhārtha means "He who has accomplished his goals" or "The accomplished goal."

Queen Māyā died seven days after the birth of the Buddha-to-be, and went to the Tuṣita Heaven. Her sister Prajāpatī (Pāli: Pajāpatī or Mahāpajāpatī Gotamī) became the child's foster mother. After Prince Siddhartha had gained perfection and became the Buddha, he visited his mother in heaven for three months to pay respects and to teach the Dharma.

Some interpretations of the life story of the Buddha attribute his birth to a virgin birth, probably from a specific interpretation of the prophetic dream Queen Māyā had prior to conception. The view is not a widely held among Buddhists. As she had been married to King Śuddhodhana for many years with no indication that she would have been a virgin at the time of Siddhārtha's conception. The conception of the Buddha has often been held to have occurred without sexual activity. Nonetheless, that interpretation has led to parallels being drawn with the birth story of Jesus.

Other interesting parallels in the birth stories include:

In the Buddha's time, Lumbini was a park situated between Kapilavatthu and Devadaha.[5], the place of Buddha's birth.[6] A pillar now marks the spot of Asoka's visit to Lumbiní. According to an inscription on the pillar, the monks taking care of the site placed the pillar to commemorate Asoka's visit and gifts.[7] The park was previously known as Rummindei, two miles north of Bhagavanpura.

In the Sutta Nipáta (vs. 683), the Buddha was born in a village of the Sákyans, in the Lumbineyya Janapada. The Buddha stayed in Lumbinívana during his visit to Devadaha and there preached the Devadaha Sutta.[8]

Re-discovery of the site of Lumbini

In 1896, Nepalese archaeologists (effort by Khadga Samsher Rana) discovered a great stone pillar at the site, attributed to Emperor Ashoka.[9] Records made by the Chinese pilgrim Fa Xian were also used in the process of identifying this religiously acclaimed site.

The holy site of Lumbini lies within the Lumbini monastic zone, in which only monasteries can be built; shops, hotels adn restaurants have been prohibited.[10] Separated into an eastern and western monastic zone, the eastern has the Theravadin monasteries, the western has Mahayana and Vajrayana monasteries.

The holy site of Lumbini includes the ruins of ancient monasteries, a sacred Bodhi tree, an ancient bathing pond, the Asokan pillar and the Mayadevi temple, where legend marks the precise place of birth of Buddha. From early morning to early evening, pilgrims from various countries perform chanting and meditation at the site.

Retrieved from https://www.newworldencyclopedia.org/p/index.php?title=Lumbini&oldid=1085663
Categories:
Hidden category:
This page was last edited on 5 November 2022, at 02:57.
Content is available under Creative Commons Attribution/Share-Alike License; additional terms may apply. See Terms of Use for details.