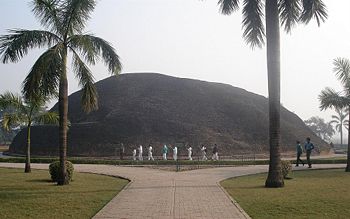 The small city of Kushinagar is located in the eastern portion of the Uttar Pradesh district in Northern India. It covers over 1786 square miles (2873.5 sq km). It is bordered in the west by the Mahrajganj district, Gorokhpur in the southwest, Deoria in the south, and Bihar to the east.

Kushinagar is considered by Buddhists as one of the world's holiest cities, as the location of Gautama Buddha's death. Buddhists hold that it is one of the four holy pilgrimage sites that the devout must visit as part of their religious development. It is said that as the Buddha lay dying, he gave instruction that lay people should make pilgrimages to four specific places related to his life: the place of his birth (Lumbini, Nepal), the place of his enlightenment (Bodh Gaya), the place of his first teaching (Sarnath, near Varanasi), and the place of his passage from this life. Some believe that those who worship at the shrines erected at these four holy places will be reborn as gods.

Kushinagar is located in northern India, near the small rural town of Kasia. According to the political break down of the Indian political system Kushinagar falls within the Uttar Pradesh state. It is located approximately 52 kilometers east from the city of Gorakhpur, one of the largest cities in northern India. The city covers a geographic area of approximately 2873.5 square kilometers, stretching from 26° 45´ N latitude and 83° 24´ E longitude.

The tourism season in Kushinagar runs from October to March, when the weather is most temperate. In the winter, temperatures range from 25°C to 30°C, which are moderate and tolerable compared to the harsh heat of summer. During the summer months, temperatures often climb as high as 43°C, making outdoor activities extremely unpleasant.

The economy of Kushinagar is predominately rural, with approximately 95 percent of the population participating in agriculture as a primary occupation. Crops in the regions are mainly prepared for large scale exportation, and single crop fields tend to dominate subsistence farms in the area. Primary export crops include sugarcane, paddy, and wheat. While agriculture is the predominant economic form in the region, smaller enterprises exist in sugar mills and distilleries.

Most of the money that comes into the area, however, comes from the tourism trade. Kushinagar was designated as one of the four official pilgrimage sites by Gautama Buddha. For this reason many devout Buddhists travel to the city as part of their religious development. In addition, the Buddhist religion states that Gautama Buddha was laid to rest in Kushinagar. Therefore, the city plays host to the religiously devout, as well as those who travel to the city as a historic site.

As a city, Kushinagar is predominately Buddhist, an occurrence most likely due to the religious significance of the city as an official pilgrimage site. The city hosts the Annual Buddha Festival (on Buddha Purnima), as well as the festivals of Navratri Mela (Palta Devi), and Shiva Ratri Mela. 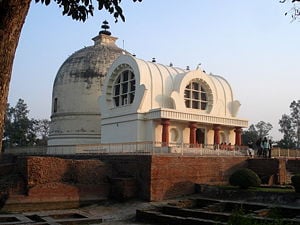 In ancient times the modern city of Kushinagar was known as Kushawati, and was the capital of the Malla political system. The Malla system, which flourished in the sixth century B.C.E., was one of the sixteen mahajanpads of ancient India. According to myth, Kushawati was built by Kush, the son of Lord Ram. Lord Ram entered into literary history as the hero of the The Ramayan. Also according to this myth, the city was named after large amount of Kush grass that grew in the area.

The ancient center of the Malla system gained global importance during Buddha's time, when Bávarí's disciples would travel along the main road from Alaka to Rájagaha. Kushinagar was only a small city along the road, but the Buddha chose the small town to be a significant site in the development of Buddhism.

According to the tenets of Buddhism, Buddha had three distinct reasons for lecturing in the small city. First of all, Buddhism states that Kushinagar had a distinct need for the teachings of Buddha, that it was essentially the right place to begin teaching. Another significant reason for visiting Kushinagar, according to Buddhism, was that Subhadda was a frequent visitor to the place. According to myth, after listening to the lectures of Buddha, Subhadda would spend time in quiet reflection. Another significant reason citing for choosing Kushinagar as a sacred site was the belief that the brahman would be nearby to arrange the distribution of holy relics after Buddha's death.

Kushinagar gained almost instant notoriety by serving as the death place for Buddha. While some feel that Buddha visited the city prior to his death, the death of Buddha after a large meal of mushrooms (some traditions point to a meal of pork) catapulted the city to instant religious notoriety. After his death, Buddha's body was carried through the city from the north towards the gate on the eastern side of the city. Once outside the eastern gate, Buddha's body was cremated at the shrine of the Mallas in the city of Makutabandhana. A seven day ceremony followed, in which mourners grieved en mass around the cremated remains. According to tradition, one-eighth of the Buddha's remains were deposited in Kushinagar to be commemorated by the remaining Mallas.

Until relatively recent times, the importance of Kushinagar had gone unnoticed by Western Europe and the United States. It was not until the remains of the Parinirvana Temple were unearthed that many other countries gained notice of the small rural city. During the process of excavation, a 40-foot-high mound of bricks was removed to reveal the remains of ancient Kushinagar and Kasia. The bricks that were removed during the excavation had remained unnoticed due to the fact that they were originally covered by a thick growth of shrubbery. In the beginning of the field work the excavation was led by E. Buchanan, an officer in the British East India Company. After his time in the field was completed, excavations were led by H.H. Wilson, and then General Alexander Cunningham. Cunningham gains the most attention for his work in the area, because he conclusively proved that Gautama Buddha had died in the area.

The ancient excavated Buddha-image inside the Parinirvana Temple, Kushinagar.

Cunningham's work helped to conclusively prove that the site could be considered a holy pilgrimage site. While devout Buddhist pilgrims had long considered Kushinagar as one of the four holiest places in their religion, scientific documentation appeared to confirm the religious teachings of Buddha himself. Since the discovery of the relics, pilgrimages to the area have increased dramatically. Religious individuals of many Buddhist sects have sought the contemplation and calmness of the Kushinagar countryside, and Chinese, Sri Lankan, Thai, Burmese, and South Korean Buddhist monasteries now dot the countryside. Visitors to Kushinagar most commonly visit the Mahaparinirvana Stupa (where Buddha is said to have died) and the site of Buddha's cremation.

The Mahaparinivana Temple (or stupa) has gained notoriety as a cultural site for its famous statue of Buddha. The 20-foot-long reclining statue is seated on a solid brick platform. It has been covered in gold leaf and a silk shroud and has been dated to the fifth century C.E. It is famous throughout the world, both for its beauty, and the singularity of its existence. As a statue of the dying Buddha, its subject matter is particularly unusual, an originality that is enhanced by the fact that it is one of the few statues of Buddha found in northern India.

Retrieved from https://www.newworldencyclopedia.org/p/index.php?title=Kushinagar&oldid=1012371
Categories:
Hidden category:
This page was last edited on 16 June 2018, at 15:21.
Content is available under Creative Commons Attribution/Share-Alike License; additional terms may apply. See Terms of Use for details.