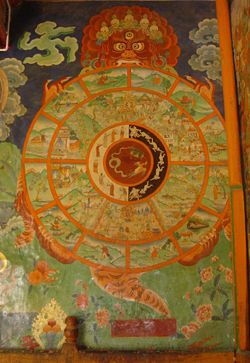 Tibetan Bhava-cakra or "Wheel of Life" is a diagram that portrays the six realms of rebirth including the realm of the Preta ("hungry ghosts").

Preta (from Sanskrit: Meaning "hungry ghost") is the name of a class of supernatural beings described in Buddhist, Hindu, and Jain texts that continue to suffer as ghosts in the afterlife because of their insatiable degree of hunger and thirst. The traditional religions of India are based on the belief in rebirth (known as "samsara"). Within these religious systems, it is said that being reborn as a hungry ghost results from excessive greed in a previous life. Due to negative past karma, Pretas are afflicted with an unstoppable hunger for a particular substance or object. Traditionally, this desired substance was the seen as something quite repugnant or humiliating, such as human corpses or feces.

Unlike ghosts and demons described in other religious traditions, however, the Pretas found in Buddhism are generally not seen as frightening or malevolent spirits. Rather Buddhists often feel pity for these beings and try to help them by offering them food on special festival days.

Though with unique differences, all religions and spiritual traditions communicate insight into the reality of an afterlife, and its relationship to how we live our lives while in a corporeal state. Most or all religions note an active relationship between corporeal and incorporeal spirits, and often show that actions on one side can influence beings across the boundary on the other.

The word "preta" is derived from Sanskrit pra ita, literally "(one who is) gone forth" and originally referred to any of the spirits of the deceased analogous to the English use of "the departed." It later became confined to a type of unhappy or malevolent spirit, and as such, it was particularly taken up by Tibetan Buddhists to describe one of six possible states of rebirth.

Pretas are invisible to the human eye, but some believe they can be discerned by some humans in certain mental states. Pretas are described as human-like, but with sunken, mummified skin, narrow limbs, enormously distended bellies and long, thin necks. This appearance is a metaphor for their mental situation: They have enormous appetites, signified by their gigantic bellies, but a very limited ability to satisfy those appetites, symbolized by their slender necks. Accordingly, Pretas are often depicted in Japanese art (particularly from the Heian period) as emaciated human beings with bulging stomachs and inhumanly small mouths and throats. They are frequently shown licking up spilled water in temples or accompanied by demons representing their personal agony. Alternately, they may be shown as balls of smoke or fire.

Pretas dwell in the waste and desert places of the earth, and vary in situation according to their past karma. Some of them can eat a little, but find it very difficult to find food or drink. Others can find food and drink, but find it very difficult to swallow. Others find that the food they eat seems to burst into flames as they swallow it. Others, if they see something edible or drinkable and desire it, find that the material withers or dries up before their eyes. As a result, they are always hungry.

In addition to hunger, Pretas suffer from immoderate heat and cold; they find that even the sun scorches them in the summer, while the moon freezes them in the winter.

The sufferings of the Pretas often resemble those of the dwellers in Naraka (Buddhist Hell), and the two types of beings are easily confused. The simplest distinction is that beings in Naraka are confined to their subterranean world, while the Pretas are free to move about.

According to Tibetan Buddhism, a person can be reborn in one of the Six realms of rebirth (The six realms are as follows: rebirth as a deva, an asura, a human being, an animal, a hungry ghost, or a being in Naraka (hell). This six-fold system is most commonly seen in Tibetan Mahāyāna Buddhism. In Theravada Buddhism there are only five realms, because the realm of the asuras not being regarded as separate from the realm of the devas.) (Tibetan: rigs drug gi skye gnas), some of which are better than others. One of these realms is being reborn as a Preta (hungry ghost). What determines which of these six realms one is reborn in, is one's previous actions and thoughts, one's karma. Briefly, these realms are described as follows:

The Deva realm is the realm of bliss and pride. The disadvantage of this realm is that things are so very comfortable there, that these beings completely neglect to work towards enlightenment. Instead they gradually use up the good karma they had previously accumulated, and so they subsequently fall to a lower rebirth.

The Deva realm is sometimes also referred to as the gods' realm, because its inhabitants are so powerful within their own realm, that compared to humans, they resemble the gods of Greek or Roman mythology. However, while the Devas may be referred to as gods, they are not immortal, omniscient, nor omnipotent, and they do not act as creators or judges at death, so they are notably very distinct from the monotheistic Western concept of God.

The Asura realm is the realm of the demigods. They are here because of actions based on jealousy, struggle, combat or rationalization of the world. They may be here because in human form they had good intentions but committed bad actions such as harming others.

The Asuras are said to experience a much more pleasurable life than humans, but they are plagued by envy for the devas, whom they can see just as animals can perceive humans.

The Human realm (also known as the Manuṣya realm) is based on passion, desire, and doubt.

Buddhists see this realm as human existence. A human rebirth is in fact considered to be the by far most advantageous of all possible rebirths in samsara because a human rebirth is the only samsaric realm from which one can directly achieve enlightenment. This is because of the unique possibilities that a human rebirth offers. A human rebirth is considered to have tremendous potential when used correctly, however human rebirths are very rare in occurrence. Many humans descends to a lower rebirth after a human life, rather than immediately going on to another human birth because we usually waste our human lifetime in materialistic pursuits, and end up reinforcing our unhelpful emotions, thoughts, and actions.

In the lower realms, such as for example the animal realm, it is a very slow and difficult process to accumulate enough merit to achieve a human birth once again, so it may be countless lifetimes before one has another chance.

The Animal realm is based on strong mental states of ignorance and prejudice cultivated in a previous life or lives. Buddhists believe that this realm is the realm of existence of the nonhuman animals on Earth. Humans can, however, see the animals, in the same way that the Asura can see the Devas.

The Hungry Ghost realm (also known as the Preta realm) is a type of rebirth based on strong possessiveness and desire which were cultivated in a previous life or lives. The sentient beings in this realm are constantly extremely hungry and thirsty, but they cannot satisfy these needs. In Tibetan versions of the Bhava-cakra these beings are drawn with narrow necks and large bellies. This represents the fact that their desires torment them, but they are completely unable to satisfy themselves. In Tibetan Buddhism, Hungry Ghosts have their own realm depicted on the Bhava-cakra and are represented as teardrop or paisley-shaped with bloated stomachs and necks too thin to pass food such that attempting to eat is also incredibly painful. This is a metaphor for people futilely attempting to fulfill their illusory physical desires.

The Naraka realm, or "hell realm" is a rebirth based on strong states of hatred cultivated in a previous life or lives. The Buddhist view of the Naraka realm differs significantly from that of most monotheistic religions in that those being punished in this realm are not trapped permanently. Rather, they remain there until their negative karma is used up, at which point they are reborn into another realm.

Relations between pretas and humans

Pretas are generally seen to be little more than nuisances to mortals unless their longing is directed toward something vital, such as blood. However, in some traditions, pretas try to prevent others from satisfying their own desires by means of magic, illusions, or disguises. They can also turn invisible or change their faces to frighten mortals.

Generally, however, pretas are seen as beings to be pitied. Thus, in some Buddhist monasteries, monks leave offerings of food, money, or flowers to them before meals.

In Japan, the Sanskrit word preta was translated as gaki (Japanese: 餓鬼, "hungry ghost"). In the modern times, the word gaki is also used to mean "spoiled child" or "brat."

Since 657 C.E., Japanese Buddhists have observed a special day in mid-August to remember the gaki by making special offerings called Segaki ("feeding the hungry ghosts"). Through this practice, it is believed that the hungry ghosts may be released from their torment. This ritual is traditionally performed to stop the suffering of the gaki, or to keep the spirits of the dead from falling into the realm of the gaki. Today, the ceremony also gives participants an opportunity to remember those who have died and to symbolically sever ties with past sins. The segaki may be performed at any time, but it is traditionally part of the O-Bon, a festival held every year in July or August to remember the dead. Due to Western influence, however, the ceremony is today often held around Halloween.

According to legend, the segaki began as a way for Moggallana (Maudgalyayna), on instruction of his master, the Buddha Sakyamuni, to free his mother from gaki-do, the realm of the gaki. Alternatively, Sakyamuni ordered Moggallana to preach the Lotus Sutra or to travel to hell himself, a feat that resulted in the escape of all gaki into the world and necessitating the segaki to force them to return to their realm.