Doubt, a status between belief and disbelief, involves uncertainty, distrust, or lack of sureness of an alleged fact, an action, motive, or a decision. Doubt may involve delaying or rejecting relevant actions. Human beings generally live with beliefs in various degrees of certainty. Doubt can play a positive role that leads one to critical examination or reflection in order to discern truth from falsity. Doubt of conventional beliefs or a framework of thought can also open up new insights and paradigms of thought. Thus, reasonable levels of doubt is important for human thought and critical thinking.

Skepticism is a philosophical position which denies some epistemic conditions necessary to attain certainty of knowledge. While skepticism denies the possibility of attaining certainty in knowledge, fallibilism does not hold such a universal claim. It rather reserves the logical possibility of having mistaken beliefs in knowledge and takes a critical stance toward any form of dogmatism.

Rene Descartes used doubt as a philosophical method in his thought experiment to discover the indubitable principle. A well known phrase Cogito ergo sum ("I think, therefore I am") is the point he reached through his methodic doubt, which properly means "I certainly exist as far as I doubt." Thus, doubt itself presupposes the certainly of the existence of the thinking self. Husserl also used this method in his early works to establish phenomenology.

A human being lives with various kinds of beliefs. The degree of certainty varies according to issues, subjects, and items. Some beliefs are highly probable and some are questionable. A human being has the capacity to critically examine the validity of a given idea. Doubt thus has a critical function to suspend one from taking an immediate belief stance and discern truth. Without this critical function of doubt, human beings can be trapped with all kinds of false beliefs, knowledge, and misinformation.

Key philosophers in the history of philosophy cast doubt on the prevailing thought of his or her time, and presented radically new ways of thinking. This progress of thought takes place by thinkers' radical renewal of existing paradigms.

In a general sense, skepticism or scepticism (Greek: skeptomai, to look about, to consider) refers to any doctrine or way of thought denying the ability of our mind to reach certainty.

Originating in the human tendency to question the reliability of any statement before accepting it, skepticism has taken on a variety of forms throughout the ages. It can refer both to an attitude in ordinary life and to philosophical positions. Skepticism is often contrasted with dogmatism, the position that certain truth can be reached by the application of an appropriate method. Epistemology, the inquiry into the conditions for certainty in knowing, has led practically every thinker to adopt, at least temporarily, some form of limited skepticism in one regard or another. And some of the greatest philosophers, such as David Hume, have come to the conclusion that certain knowledge is essentially unattainable. By its very nature, skepticism is unsatisfactory as an end result. Whether it is ultimately embraced or rejected thus depends in great part on one’s general outlook of life, pessimism being generally associated with the skeptical option. In any case, however, skepticism has played an irreplaceable role as a catalyst in the history of philosophy.

Fallibilism is the philosophical doctrine that all claims of knowledge could, in principle, be mistaken. Some fallibilists go further, arguing that absolute certainty about knowledge is impossible. As a formal doctrine, it is most strongly associated with Charles Sanders Peirce, John Dewey, and other pragmatists, who use it in their attacks on foundationalism. However, it is arguably already present in the views of some ancient philosophers, including Xenophanes, Socrates, and Plato. Another proponent of fallibilism is Karl Popper, who builds his theory of knowledge, critical rationalism, on fallibilistic presuppositions. Fallibilism is also been employed by Willard Van Orman Quine to, among other things, attack the distinction between analytic and synthetic statements.

Unlike scepticism, fallibilism does not imply the need to abandon our knowledge—we needn't have logically conclusive justifications for what we know. Rather, it is an admission that, because empirical knowledge can be revised by further observation, any of the things we take as knowledge might possibly turn out to be false. Some fallibilists make an exception for things that are axiomatically true (such as mathematical and logical knowledge). Others remain fallibilists about these as well, on the basis that, even if these axiomatic systems are in a sense infallible, we are still capable of error when working with these systems. The critical rationalist Hans Albert argues that it is impossible to prove any truth with certainty, even in logic and mathematics. This argument is called the Münchhausen Trilemma.

Moral fallibilism is a specific subset of the broader epistemological fallibilism outlined above. In the debate between moral subjectivism and moral objectivism, moral fallibilism holds out a third plausible stance: that objectively true moral standards exist, but that they cannot be reliably or conclusively determined by humans. This avoids the problems associated with the flexibility of subjectivism by retaining the idea that morality is not a matter of mere opinion, whilst accounting for the conflict between differing objective moralities. Notable proponents of such views are Isaiah Berlin (value pluralism) and Bernard Williams (perspectivism).

The Münchhausen-Trilemma, also called Agrippa's Trilemma (after the eponymous Greek Skeptic), is a philosophical term coined to stress the purported impossibility to prove any certain truth even in the fields of logic and mathematics. It is the name of an argument in the theory of knowledge going back to the German philosopher Hans Albert, and, more traditionally, to the skeptic Agrippa. The concept is referred by both skeptics and fallibilists.

The term is ironically named after Baron Münchhausen, who allegedly pulled himself out of a swamp by his own hair.

These tropes are given by Sextus Empiricus, in his Outlines of Pyrrhonism. According to Sextus, they are attributed only "to the more recent skeptics" and it is by Diogenes Laertius that we attribute them to Agrippa.[1] The tropes are:

With reference to these five tropes, that the first and third are a short summary of the ten original grounds of doubt which were the basis of the earlier skepticism.[1] The three additional ones show a progress in the skeptical system, and a transition from the common objections derived from the fallibility of sense and opinion, to more abstract and metaphysical grounds of doubt.

Methodic doubt ("Hyperbolic doubt") is a systematic process of being skeptical about (or doubting) the truth of one's beliefs, which has become a characteristic method in philosophy. This method of doubt was largely popularized in the field of philosophy by René Descartes (1596-1650), who sought to doubt the truth of all his beliefs in order to determine which beliefs he could be certain were true.

Edmund Husserl, a founder of phenomenology, also used methodic doubt, in his early works, to find out the indubitable ground in philosophy. He later gave up this Cartesian path and developed phenomenology of life world which encompasses a broader social, cultural, and historical relations of human existence. 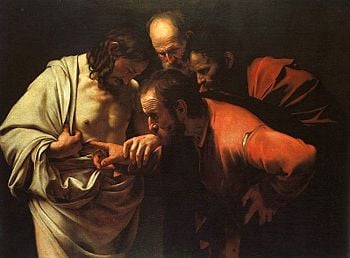 The Incredulity of Saint Thomas by Caravaggio

In the context of spirituality, individuals may see doubt as the opposite of faith. If faith represents a compulsion to follow a path, doubt may succeed in blocking that particular path. People use doubts and faith every day to choose the life path that they follow. Questions of what, how, and why one believes or is certain about certain claims or doctrines are one of essential subjects in the philosophy of religion. Epistemic conditions of validation of knowledge, the roles of reason, experience, and revelation in establishing religious faith are complex issues in theology and religious philosophy.

Law: "beyond a reasonable doubt"

Doubt sometimes tends to call on reason. It may encourage people to hesitate before acting, and/or to apply more rigorous methods. Doubt may have particular importance as leading towards disbelief or non-acceptance.

Politics, ethics and law, faced with decisions that often determine the course of individual life, place great importance on doubt, and often foster elaborate adversarial processes to carefully sort through all the evidence in an attempt to come to a decision.

Wikiquote has a collection of quotations related to:
Doubt