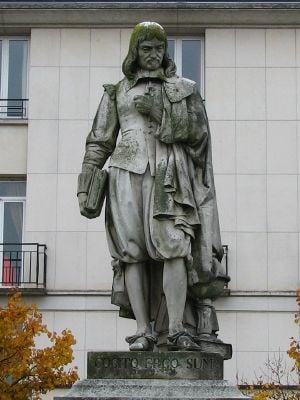 "Cogito, ergo sum" (Latin: "I am thinking, therefore I exist," or traditionally "I think, therefore I am") is a philosophical phrase by René Descartes, and it is a translation of Descartes' original French statement: "Je pense, donc je suis," which occurs in his Discourse on Method (1637).

Descartes understood "certainty" as the primary characteristic of valid knowledge. He conducted a series of thought experiments (regarding methodic doubt) in order to find the indubitable, self-evident truth expressed by this phrase. The interpretation of this phrase has been subject to numerous philosophical debates. The phrase expresses a skeptical intellectual climate which is indicative of early modern philosophy.

The phrase, "cogito ergo sum" is not used in Descartes' most important work, the Meditations on First Philosophy, but the term "the cogito" is (often confusingly) referred to in it. Descartes felt that this phrase, which he had used in his earlier Discourse, had been misleading in its implication that he was appealing to an inference, so he changed it to "I am, I exist" (also often called "the first certainty") in order to avoid the term "cogito."

At the beginning of the second meditation, having reached what he considers to be the ultimate level of doubt—his argument from the existence of a deceiving god—Descartes examines his beliefs to see if any survive the doubt. In his belief in his own existence he finds that it is impossible to doubt that he exists. Even if there were a deceptive god (or an evil demon, the tool he uses to stop himself from sliding back into ungrounded beliefs), his belief in his own existence would be secure, for how could he be deceived unless he existed in order to be deceived?

But I have convinced myself that there is absolutely nothing in the world, no sky, no earth, no minds, no bodies. Does it now follow that I too do not exist? No: if I convinced myself of something [or thought anything at all] then I certainly existed. But there is a deceiver of supreme power and cunning who is deliberately and constantly deceiving me. In that case I too undoubtedly exist, if he is deceiving me; and let him deceive me as much as he can, he will never bring it about that I am nothing so long as I think that I am something. So, after considering everything very thoroughly, I must finally conclude that the proposition, "I am, I exist," is necessarily true whenever it is put forward by me or conceived in my mind (AT VII 25; CSM II 16–17).

There are two important points that should be noted. First, he only claims the certainty of his own existence from the first-person point of view—he has not proved the existence of other minds at this point. It follows that this is something that has to be thought through by individuals for themselves as they follow the course of the meditations. Secondly, he does not assert that his existence is necessary; he is saying that "if he's thinking," then he necessarily exists.

Descartes does not use this first certainty, the cogito, as a foundation upon which to build further knowledge; rather, it is the firm ground upon which he can stand as he works to restore his beliefs. As he puts it:

Archimedes used to demand just one firm and immovable point in order to shift the entire earth; so I too can hope for great things if I manage to find just one thing, however slight, that is certain and unshakable (AT VII 24; CSM II 16).

One way of expressing what Descartes meant is, "I am aware of my existence."

Descartes's argument based on substance-accident ontology

Descartes' argument depends on and follows necessarily from his prior acceptance of a substance-accident ontology; that ontology was derived ultimately from Aristotle and accepted without serious question by most philosophers in Descartes' time. In substance-accident ontology, substances exist independently by themselves—they do not need anything else for their existence—but accidents can exist only by inhering in a substance.

Consider a man, for example. That man is a substance. But the man can be sick or healthy, running or sitting, asleep or awake, thinking or thoughtless, white or brown, and so on. Sickness or health do not exist independently themselves; they must exist in a sick or healthy person (or other living thing). Running or sitting cannot exist by themselves; they can exist only in a running or sitting man (or other being that runs or sits). It is the same with being asleep or awake, thinking or thoughtless, or with color. There is no such thing as “asleepness” or “awakeness” in themselves; they must exist only in a person or other being—a substance—that is asleep or awake. There cannot be color (at least in this ontology) apart from a colored thing (colored substance).

So, when Descartes concludes—correctly—that his doubt or even his being deceived is a form of thinking, this leads, since thinking is an accident and not a substance, to the conclusion that a thinking substance must exist as a necessary condition or substrate for the existence of that thinking (or doubting or being deceived).

The substance-accident ontology is, of course, questionable. David Hume and other phenomenalists usually deny it. But if one accepts that ontology, then Descartes' statement expresses a necessary conclusion from it.

This fallacy and its prevalence is illustrated by the popular joke:

Descartes is sitting in a bar, having a drink. The bartender asks him if he would like another. "I think not," he says, and vanishes in a puff of logic.

Criticisms of the cogito

There have been a number of criticisms of the cogito. The first of the two under scrutiny here concerns the nature of the step from "I am thinking" to "I exist." The contention is that this is a syllogistic inference, for it appears to require the extra premise: "Whatever has the property of thinking, exists," and that extra premise must surely have been rejected at an earlier stage of the doubt.

Perhaps a more relevant contention is whether the "I" to which Descartes refers is justified. In Descartes, The Project of Pure Enquiry, Bernard Williams provides a history and full evaluation of this issue. The main objection, as presented by Georg Lichtenberg, is that rather than supposing an entity that is thinking, Descartes should have just said: "There is some thinking going on." That is, whatever the force of the cogito, Descartes draws too much from it; the existence of a thinking thing, the reference of the "I," is more than the cogito can justify. But that objection is a mistake if one accepts, as Descartes did, the substance-accident ontology and its consequences.

Williams provides a meticulous and exhaustive examination of this objection. He argues, first, that it is impossible to make sense of "there is thinking" without relativising it to something. It seems at first as though this something needn't be a thinker, the "I," but Williams goes through each of the possibilities, demonstrating that none of them can do the job. He concludes that Descartes is justified in his formulation (though possibly without realizing why that was so).

While the preceding two arguments against the cogito fail, other arguments have been advanced by Bernard Williams. He claims, for example, that what one is dealing with when one talks of thought, or when one says, "I am thinking," is something conceivable from a third-person perspective; namely objective "thought-events" in the former case, and an objective thinker in the latter.

The obvious problem is that, through introspection, or experience of consciousness, there is no way of moving to conclude the existence of any third-person fact, verification of which would require a thought that is necessarily impossible, being, as Descartes is, bound to the evidence of his own consciousness alone.

Another way of putting this would be that Descartes' argument can establish only solipisism. Against that, Descartes could reply that the problem of solipisism arises in almost any philosophy or ontology or epistemology, so this objection is not unique to Descartes's philosophy, and thus it loses at least some of its supposed force. Moreover, Descartes went on to develop arguments and evidence that, he thought, does establish the existence of an external world and other minds.

Retrieved from https://www.newworldencyclopedia.org/p/index.php?title=Cogito_ergo_sum&oldid=1033849
Categories:
Hidden category:
This page was last edited on 15 March 2020, at 18:34.
Content is available under Creative Commons Attribution/Share-Alike License; additional terms may apply. See Terms of Use for details.