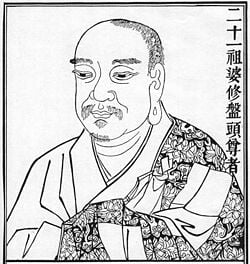 Gandharan monk and Yogacara philosopher Vasubandhu from a Chinese illustration.

Yogācāra (Sanskrit: "Yoga practice;" "one whose practice is yoga")[1] is an influential school of Buddhist philosophy and psychology emphasizing ontology and phenomenology through the interior lens of meditative and yogic practices, that developed in Indian Mahāyāna Buddhism circa fourth century C.E.[2]

The origins of the scholarly Indian Yogācāra tradition were rooted in the syncretic scholasticism of Nālandā University where the doctrine of Cittamātra was first extensively propagated. Doctrines, tenets, and derivatives of this school have influenced and become well-established in China, Tibet, Japan, and Mongolia and throughout the World via the dissemination and dialogue wrought by the Buddhist diaspora.

Yogacara discourse views that all phenomena is mind. This view is founded on the existential truth of the human condition: There is nothing that humans experience that is not mediated by mind. That said, there is also the metaphysical view of panpsychism (the view that all parts of matter involve mind) inherent in the mystical experiences of proponents of the Yogacara tradition.

Yogācāra may be orthographically rendered according to English convention as "yogachara," which also approximates its phonetic sound. An alternate nomenclature for the school is Vijñānavāda (Sanskrit: vāda holds a semantic field of "doctrine" and "way;" vijñāna holds a semantic field of "consciousness" and "discernment"). Hence, Vijñānavāda may be rendered as "Consciousness Doctrine" or "Discernment Way"; though it is commonly rendered as "Knowledge Way".[3]

The two principal schools of Indian Mahayana Buddhism are the Yogācāra and Mādhyamika.[1] Hattori Masaaki (2005) states that Yogācāra "…attaches importance to the religious practice of yoga as a means for attaining final emancipation from the bondage of the phenomenal world. The stages of yoga are systematically set forth in the treatises associated with this tradition."[1] He adds, "[a]ccording to the Saṃdhinirmocana sūtra, the first Yogācāra text, Buddha set the "wheel of the doctrine" (dharmacakra) in motion three times."[1] Hence, the Saṃdhinirmocana sūtra as the doctrinal trailblazer of Yogācāra, which inaugurated the Three Turnings of the Dharmacakra. The Yogācāra texts are generally considered part of the Third Turning along with the relevant sūtra. (Some traditions categorize this teaching amongst the "Fourth Turning" of the Dharmacakra.) In addition to the above sutra, Yogacara is commonly considered to have been founded by two Brahmin born half-brothers named Vasubandhu and Asaṅga. These half-brothers were themselves said to have been inspired by the Buddha Maitreya.

Over time, the philosophy of Yogacara attained a prominent position in the Indian scholastic tradition for several centuries due to its lauded pedigree and propagation at Nālandā university, one of the most famous centers of learning in ancient India. From its original development in India and propagation at Nalanda, Yogacara was taken to other lands by Buddhist missionaries and travellers. The principal exponents of Yogācāra according to different locations in Asia were:

Yogācāra was transmitted to Tibet by Dharmarakṣita who initiated Atiśa into the Yogācāra lineage, wherein, Yogācāra became integral to Tibetan Buddhism. Yogācāra is an essential philosophy of the Nyingmapa school of tibetan Buddhism as well as Dzogchen. Yogācāra also became central to East Asian Buddhism.

When Yogacara came to China, its teachings became known as the Wei Shih school of Buddhism.

Yogācārins, those that hold to the tenets of Yogācāra, generally uphold the doctrine of the Ālaya vijñāna: A fundamental, root or base consciousness; comparable to the "ground of being" in Western philosophical discourse. The ālaya vijñāna is the fecund matrix, the substrate fabric of consciousness and being. The ālaya vijñāna houses the karmic bīja that "seed" our experience of reality and "perfume" our worldview. The Ālaya vijñāna and the Tathāgata-garbha doctrine developed and resolved into the Mindstream or the "consciousness-continuity" doctrine (Sanskrit: citta santāna)[4] to avoid being denounced as running counter to the doctrine of Śūnyatā and the tenets of Anātman. These developments, whether perceived as evolutions, devolutions or hybridizations are contentious, often divisive between and within schools and traditions.

Muller (2005) charts two principal points of entry into the tenets of Yogācāra soteriology: The first, employs an admixture of the "eight consciousnesses" (Sanskrit: Aṣṭa Vijñāna), "four parts of cognition," "three natures," and the "doctrine of selflessness," and so on; the second, embraces the "two hindrances" (Sanskrit: dve āvaraṇe; Tibetan: Sgrib pa gñis).[5] He adds, "There is no special need to try to assess whether one of these approaches is better than the other, for indeed, in the vast and complex system that is known as Yogācāra, all of these different approaches and categories are ultimately tied into each other, and thus, starting with any one of them, one can eventually enter into all of the rest."[5]

Perhaps the best known teaching of the Yogācāra system is that of the eight layers of consciousness. This theory of the consciousnesses attempted to explain all the phenomena of cyclic existence, including how rebirth occurs and precisely how karma functions on an individual basis. For example, if I carry out a good or evil act, why and how is it that the effects of that act do not appear immediately? If they do not appear immediately, where is this karma waiting for its opportunity to play out?

The answer given by the Yogācāra was the store consciousness (also known as the base, or eighth consciousness; Sanskrit: Alayavijñāna) which simultaneously acts as a storage place for karma and as a fertile matrix that brings karma to a state of fruition. The likeness of this process to the cultivation of plants led to the creation of the metaphor of seeds (Sanskrit, bijas) to explain the way karma is stored in the eighth consciousness. The type, quantity, quality and strength of the seeds determine where and how a sentient being will be reborn: One's species, sex, social status, proclivities, bodily appearance and so forth.

On the other hand, the karmic energies created in the current lifetime through repeated patterns of behavior are called habit energies (Sanskrit: Vasana). All the activities that mold the body-mind, for better or worse—eating, drinking, talking, studying, practicing the piano, and so on—can be understood to create habit energies. And of course, one's habit energies can penetrate the consciousnesses of others, and vice versa—what is called "influence" in everyday language. Habit energies can become seeds, and seeds can produce new habit energies.

Additionally, Yogācāra describes three basic modes by which we perceive our world. These are referred to in Yogācāra as the three natures of perception. They are:

Regarding perception, the Yogācāra school also emphasized that our everyday understanding of the existence of external objects is problematic, since in order to perceive any object (and thus, for all practical purposes for the object to "exist"), there must be a sensory organ as well as a correlative type of consciousness to allow the process of cognition to occur.

Additionally, the Buddhist doctrines of Śūnyatā, Pratītyasamutpāda, and the "two truths" are central in Yogācāra thought and meditation.[6]

The Yogacara school of Mahayana philosophy was in notable, protracted dialectic (as different from opposition) with the rival Mādhyamika school. While the Mādhyamika asserted that there is no ultimately real thing, the Yogācāra school asserts that only the mind (or in the more sophisticated variations, primordial wisdom) is ultimately real. Not all Yogācārins asserted that mind was truly existent.

Later Yogācāra views synthesized the two, in particular Shantarakshita whose view is attributed as Yogacara-Svatantrika-Madhyamika. In his view the Mādhyamika position is ultimately true and at the same time the mind-only view is a useful way to relate to conventionalities and progress students more skillfully toward the ultimate.[7] This synthesized view between the two positions — which also incorporated views of valid cognition from Dignaga and Dharmakirti — was one of the last developments of Indian Buddhism before it was extinguished in the eleventh century during the Muslim incursion.

This view was also expounded by Xuanzang, who after a suite of debates with exponents of the Madhyamaka School, composed in Sanskrit, the no longer extant three-thousand verse treatise on "The Non-difference of Madhyamaka and Yogācāra."[8]

Later Yogācāra teachings are especially important in Tantric Buddhism, which evolved within their development in India.

Current debates among Tibetan schools between the Shentong (empty of other) versus Rangtong (empty of self) views appear similar to earlier debates between Yogācāra and Mādhyamika but the issues and distinctions have evolved further. Though the later Tibetan views could be said to have evolved from the earlier Indian positions, the distinctions between the views became increasingly subtle especially once Yogācāra incorporated the Mādhyamika view of the ultimate. In the nineteenth century, rime movement commenter Ju Mipham—in his commentary on Shantarakshita's synthesis—wrote that the ultimate view by both schools is the same and the result of each path also leads to the same ultimate state of abiding.[9]

The doctrine of emptiness (Sanskrit: Śūnyatā) is central to Yogācāra, as to any Mahayana school. Early Yogācāra texts, such as the Yogacarabhumi-sastra, often act as explanations on Prajnaparamita sutras. See also the Samdhinirmocana Sutra.

As one Buddhologist puts it, "Although meaning 'absence of inherent existence' in Madhyamaka, to the Yogacarins [śūnyatā] means 'absence of duality between perceiving subject and the perceived object.'"[10]

This is not the full story however, as each of the three natures (above), has its corresponding "absence of nature." For example:

Each of these "absences" is a form of sunyata, that is, the nature is "empty" of some particular qualified quality.

Although Yogācāra, like all Indian schools of Buddhism, eventually became virtually extinct within India, its impact on Buddhist thought remained profound. There are two important aspects of the Yogācāra schemata that are of special interest to modern-day practitioners. One is that virtually all schools of Mahayana Buddhism came to rely on Yogācāra explanations as they created their own doctrinal systems—even the Zen schools. For example, the important Yogācāra explanation of the pervasiveness of one's delusions through "mind-only" had an obvious influence on Zen.

The fact that the scriptural tradition of Yogācāra is not yet that well known among the community of Western practitioners perhaps results from most of the initial transmission of Buddhism to the West, which were mainly concerned with practice-oriented forms of Buddhism, such as Zen, vipaśyanā, and Pure Land. Moreover, Yogacara is a complicated system without many introductory books on the topic in Western languages. However, within Tibetan Buddhism more and more Western students are becoming acquainted with this school. Nevertheless, very little research in English has been carried out on the Chinese Yogācāra traditions.

Retrieved from https://www.newworldencyclopedia.org/p/index.php?title=Yogacara&oldid=1043958
Categories:
Hidden category:
This page was last edited on 15 October 2020, at 17:42.
Content is available under Creative Commons Attribution/Share-Alike License; additional terms may apply. See Terms of Use for details.