Dzogchen (or 'Great Perfection'), pronounced tsɔktɕʰẽ in the International Phonetic Alphabet, is the central teaching of the Nyingma school of Tibetan Buddhism and is considered to be the highest and most definitive path to enlightenment by this school.[1] Many Tibetan lamas, particularly of the Nyingma and Kagyu schools, regard Dzogchen as the most profound teachings altogether elucidating the nature of non-dualism.[2] Practicing Tibetan Buddhists consider that the state pointed to by these teachings is very difficult to describe, and can only be discovered through its transmission by an authentic Vajra Master.

Dzogchen denotes the natural, primordial condition of every sentient being, including humans. In Dzogchen, self-liberation is achieved by discovering or recognizing one's own primordial mindstream and remaining in that natural state of primordial awareness in which all phenomena are experienced without creating karma through reaction, attachment, or conceptual labelling.

Some teachers regard the description of this nature as a teaching completely in its own right, independent of Buddhism or Bön. Namkhai Norbu says that, as our primordial nature, Dzogchen has existed since the beginning of time and is pointed to by various masters throughout the universe.[3]

The word Dzogchen has been translated variously as 'Great Perfection', 'Great Completeness', 'Total Completeness', or 'Supercompleteness'. These terms also convey the idea that our nature as intrinsic awareness has many qualities that make it 'perfect'. These include indestructibility, incorruptible purity, non-discriminating openness, flawless clarity, profound simplicity, all-pervading presence and equality within all beings (i.e., the quality, quantity and functionality of this awareness is exactly the same in every being in the universe). It is said that the impressive personal qualities of the fully-enlightened Buddha derived from the fact that he was fully 'aligned' with this already-existing primordial nature. Descriptions of the Buddha as omniscient and omnipresent refer to his ultimate nature as this awareness.

In Tibet, Padmasambhava is considered the source of the Buddhist Dzogchen teachings, which are at the heart of the Nyingma tradition. Dzogchen has also been practiced in the Kagyu lineage, beginning with Milarepa and most notably by the Third Karmapa, Rangjung Dorje. The Fifth, Thirteenth, and Fourteenth (present) Dalai Lamas are also noted Dzogchen masters, although their adoption of the practice of Dzogchen has been a source of controversy among more conservative members of the Geluk tradition.

In the Bön religion, three separate Dzogchen traditions are attested and continue to be practiced: A-tri, Dzogchen (here referring narrowly to the specific lineage within Bön), and Shang Shung Nyen Gyu. All are traced back to the founder of Bön, Tonpa Shenrab Miwoche.

Our ultimate nature is said to be pure, all-encompassing, primordial awareness. This 'intrinsic awareness' has no form of its own and yet is capable of perceiving, experiencing, reflecting, or expressing all form. It does so without being affected by those forms in any ultimate, permanent way. The analogy given by Dzogchen masters is that one's nature is like a mirror which reflects with complete openness but is not affected by the reflections, or a crystal ball which takes on the color of the material on which it is placed without itself being changed. When an individual is able to maintain the rdzogs chen state continually, he or she no longer experiences dukkha, or feelings of discontent, tension and anxiety in everyday life. (Compare with nirvana).

The Dzogchen teachings focus on three terms: View, Meditation, and Action. To see directly the absolute state of our mind is the View; the way of stabilizing that View and making it an unbroken experience is Meditation; and integrating that View into our daily life is what is meant by Action.

According to Dzogchen philosophy, sentient beings have their energy manifested in three aspects:

The interplay of these energies explain the 'thoughtform' or 'tulpa' (Tibetan: sprul pa) phenomenon, the logistics of the Trikaya doctrine, the yidam sadhana, bardo visions, Clear Light, emergence and the logistics of the doctrine of Pratītyasamutpāda, they also explain the 'play' (Sanskrit: lila of the Five Pure Lights and the arising of a 'Creation' without a Creator deity or a Prime Cause that is the particular 'view' and hallmark of Buddhism.

Many practices of thödgal and yangthig work on the basis of functioning of the rolpa aspect of individual's energy. It is also the original source of the sambhogakaya deities visualized in Buddhist tantric transformational practices and of manifestations of one hundred peaceful and wrathful deities in bardo. The mind of a sentient being is also tsal energy when it is 'contaminated' by the karmic 'winds' (Tibetan: rlung). Certain practices stop the karmic winds of the body and therefore allow the energy of tsal to be experienced by itself.

According to Dzogchen teachings, energy of an individual is essentially totally formless and free from any duality. However, karmic traces, contained in the storehouse consciousness of the individual's mindstream (Sanskrit: citta santana; Tibetan: sems rgyud) give rise to two kinds of forms:

It is maintained that there is nothing external or separate from the individual. What appears as a world of apparently external phenomena, is the energy of the individual himself/herself. Everything that manifests in the individual's field of experience is a continuum (Sanskrit: santana; Tibetan: rgyud). This is the 'Great Perfection' that is discovered in the Dzogchen practice.[7]

This corresponds to the assertion in the Heart sutra (Sanskrit: Prajñāpāramitā Hridaya Sūtra), that there is no karma, no law of cause and effect. The assertion was made by bodhisattva Avalokiteshvara in a teaching for the great arhat Shariputra, given before multitude of beings, on request of Buddha Shakyamuni. After the teaching Buddha Shakyamuni greatly praised the wisdom of Avalokiteshvara's words and the beings present rejoiced.[8]

All teachings have energies that have special relationships with them. These energies are guardians of the teachings. The energies are iconographically depicted as they were perceived by yogis who had contact with them. The dharmapala most associated with Dzogchen is Ekajati. The iconographic forms were shaped by perceptions and also by the culture of those who saw the original manifestation and by the development of the tradition. However the guardians are not merely symbols. The pictures show actual beings.[9]

The primary instructions for dzogchen practice, contained in the Three words that Strike to the Heart attributed to Garab Dorje, divide up the method into three parts, path, practice, and result:

Dzogchen has two distinct phases to it. The first, trekchö, aims to bring about the ability to rest in emptiness, and the realization of the basic purity of all things (meaning they are free of any conceptualization, such as clean and unclean, good and bad, etc.). Sogyal Rinpoche explains that “Trekchö means cutting through delusion with fierce, direct thoroughness” (quoted in Ibid, 317). This practice is said to be the same as essence mahamudra (see Kagyü) in almost every way.

The second stage is thögal (leap-over), and is almost universally said by members of all schools of Tibetan Buddhism to be “the ultimate path within Buddhism and, indeed, the highest attainment that is possible to human beings” (Ibid, 318), as it beings about full buddhahood in one lifetime. Again, little is said about these practices because “there is a great danger of misunderstanding the path, the methods and the invitation [from the guru to awaken]” (Dzogchen Ponlop, 253).

Sogyal Rinpoche, Chögyal Namkhai Norbu Rinpoche and other teachers provide different practical sets of instructions (Sanskrit: sadhana) for the practice of Dzogchen. The central practice of Dzogchen teaching is Dzogchen 'contemplation,' which is rendered in English as "The View." "The View" when stabilized or unbroken, is the nondual perception of the Dzogchenpa, or Dzogchen practitioner. That is, a continuous 'contemplation' through all activity, waking and sleeping as a lived experience. According to some Dzogchenpa (in particular, Namkhai Norbu), Dzogchen is a 'practice', rather than a 'doctrine' or 'religion', and does not require the practitioner (Sanskrit: sadhaka) to be anywhere special; in fact, to be normally active while in a state of primordial or natural awareness is the ultimate practice of Dzogchen.

Silent and prolonged meditation is also used to allow the obscurations (Sanskrit: kleśa) of the mind to dissipate like clouds dissolving to reveal the empty, luminous sky. Through meditation, it is possible to remove the conditioning of our bodymind (Sanskrit: namarupa) and to glimpse and work to stabilize our true nature (Sanskrit: vidya).

The goal of Dzogchen practice is to remain in the clear, undeluded state of the nature of the bodymind, unconditioned by thoughts—which is not the same thing as not having any thoughts. At the beginning, a Dzogchen teacher introduces one directly to the real nature of one's bodymind, even if only for a few seconds; being a Dzogchen practitioner thus implies that one must have a qualified Dzogchen teacher, one who has mastered the nature of the mindstream. Historically, Dzogchen teachers have been very selective in choosing initiates, but current lineage holders in the Nyingma and Bön traditions have made Dzogchen teachings available to a wider (Western) audience.

In both the Bön and Buddhist Dzogchen traditions, sky gazing is considered to be an important practice.[11] Detailed instructions on the practice are provided by the Nyingma teacher Tarthang Tulku.[12] 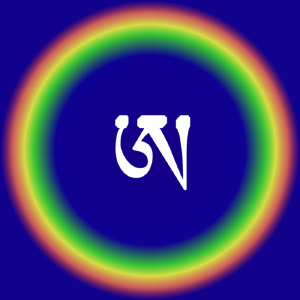 Tibetan letter "A," the symbol of body of light

When an advanced practitioner successfully completes practices of Longde or Menngagde, he or she is said to realize the Body of Light also know as the 'rainbow body' (pronounced 'Jalü'.) When such an individual dies, from the point of view of an external observer, the following happens: the corpse does not start to decompose, but starts to shrink until it disappears. Usually fingernails, toenails and hair are left behind[13]

Some exceptional practitioners (such as Padmasambhava and Vimalamitra) are held to have realized the 'Great Transferrence'. This is an advanced Phowa practice. The individual does not die at all but his or her physical body gradually disappears for an external observer.[14]

Dzogchen is the central teaching of the Nyingma school of Tibetan Buddhism and is considered to be the highest and most definitive path to enlightenment by this school. It denotes the natural, primordial condition of every sentient being. According to this teaching, self-liberation is achieved by discovering or recognizing one's own primordial mindstream and remaining in that natural state of primordial awareness.

Retrieved from https://www.newworldencyclopedia.org/p/index.php?title=Dzogchen&oldid=1095979
Categories:
Hidden category:
This page was last edited on 16 January 2023, at 01:18.
Content is available under Creative Commons Attribution/Share-Alike License; additional terms may apply. See Terms of Use for details.