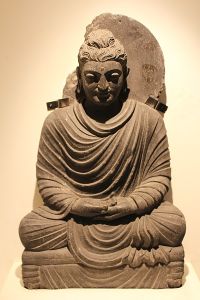 Vipassanā (Pāli) or vipaśyanā (विपश्यना) in (Sanskrit) means "insight" and is often used to describe a type of Buddhist meditation practice called "insight meditation." The underlying purpose of Vipassanā meditation is the cultivation of mindfulness. Vipassanā is often contrasted with a second type of Buddhist meditation called samatha. Whereas Samatha focuses on calming the mind, it is seen as a preliminary stage for vipassanā practice. Pacifying the mind and strengthening concentration allows the practitioner to begin the work of insight (Vipassanā). These two types of Buddhist meditation are sometimes described as "stopping and seeing." Thus, while samatha calms the mind, only insight meditation is said to be able to reveal how the mind was disturbed to start with, which leads to prajñā (Pāli: paññā, knowledge) and jñāna (Pāli: ñāṇa, wisdom).

The term is also used to refer to the Buddhist vipassana movement (modeled after Theravāda Buddhism meditation practices), which employs vipassanā and ānāpāna meditation as its primary techniques and places emphasis on the teachings of the Satipaṭṭhāna Sutta.

Vipassanā is a Pali word from the Sanskrit prefix "vi-" and verbal root √paś. It is often translated as "insight" or "clear-seeing," though, the "in-" prefix may be misleading; "vi" in Indo-Aryan languages is equivalent to our (Latin) "dis." The "vi" in vipassanā may then mean to see apart, or discern. Alternatively, the "vi" can function as an intensive, and thus vipassanā may mean "seeing deeply." In any case, this is used metaphorically for a particularly powerful mental perception.

A synonym for "Vipassanā" is paccakkha (Pāli; Sanskrit: pratyakṣa), "before the eyes," which refers to direct experiential perception. Thus, the type of seeing denoted by "vipassanā" is that of direct perception, as opposed to knowledge derived from reasoning or argument.

In Tibetan, vipashyana is lhagthong. The semantic field of "lhag" means "higher," "superior," "greater"; the semantic field of "thong" is "view" or "to see." So together, lhagthong may be rendered into English as "superior seeing" or "great vision." This may be interpreted as a "superior manner of seeing,” and also as "seeing that which is the essential nature." Its nature is a lucidity, a clarity of mind.[1]

Vipassanā meditation is a simple technique that depends on direct experience and observation. It can be related to the three trainings taught by the Buddha as the basis of a spiritual path: adherence to a sīla (Sanskrit: śīla) (abstinence from killing, stealing, lying, sexual misconduct and intoxication), which is not an end in itself but a requirement for the second part, concentration of the mind (samādhi). With this concentrated mind, the third training, in the context of this technique (paññā, Sanskrit prajñā), is detached observation of the reality of the mind and body from moment to moment.

The actual instructions for Vipassana meditation are not often published in clear terms in public venues. This is simply to avoid confusion and prevent incorrect technique. The instructions are not esoteric or difficult but basically involve retraining the mind to avoid its innate conditioned response to most stimuli. In order to obtain maximum benefit, it is recommended that this be learned from a legitimate source as it does have deep cleansing effects. Although Vipassana includes body awareness as part of the practice, it is not a "body scan" technique. The purpose is also not to release past trauma, but to bring full awareness of the mind, body and all sensations and be fully present. This practice is thought to develop a deep, experiential understanding of the impermanence of all phenomena and also brings to the surface and dissolves deep-seated complexes and tensions. The technique fosters development of insight and needs to be continued as a way of life in order to having lasting effects.

Put another way, Vipassanā meditation consists of the experiential observation of mind and matter (nāma and rūpa) in their aspects of impermanence, unsatisfactoriness and lack of an inherent, independent essence or self.

Vipassanā in the Theravāda, Mahāyāna and Vajrayāna

Vipassanā as practiced in the Theravāda is the understanding of the Four Noble Truths that were taught by the Buddha. It is understanding the transitory nature of phenomena and the selflessness of persons, that the conceptual consciousness, "I" does not exist.

Most of Theravāda's teachers refer to knowledge evolving during practice. The meditator gradually improves his or her perception of the three marks of existence until he or she reaches the step sensations constantly disappear, which is called bhaṅgānupassanā ñāṇa (Sanskrit: bhaṅgānupaśyanājñāna), knowledge of dissolution.

The yogi will then experience fear and ceasing of attachment, and eventually will reach the step of saṅkhārupekkhāñāṇa (Sanskrit: saṃskāropekṣājñāna): knowledge of equanimity of formations. This step leads to the attainment of nibbāna.

Mahāyāna Vipaśyanā consists of meditating on the two truths: conventional truth and absolute truth. One realizes that phenomena likewise have a lack of inherent existence, and have the nature of emptiness (śūnyatā). This is determined by the inferential path of reasoning and direct observation through meditation.

Mahāmudrā and Dzogchen use Vipaśyana extensively, though in a different manner than in the Theravāda. In the Vajrayāna (tantric) path, the true nature of mind is pointed out by the guru, and the practitioner takes the path of direct experience.

"In the Sūtra path (Theravāda) one proceeds by examining and analyzing phenomena, using reasoning. One recognizes that all phenomena lack any true existence and that all appearances are merely interdependently related and are without any inherent nature. They are empty yet apparent, apparent yet empty. The path of Mahāmudrā is different in that one proceeds using the instructions concerning the nature of mind that are given by one's guru. This is called taking direct perception or direct experiences as the path. The fruition of śamatha is purity of mind, a mind undisturbed by false conception or emotional afflictions. The fruition of vipaśyanā is knowledge (prajnā) and pure wisdom (jñāna). Jñāna is called the wisdom of nature of phenomena and it comes about through the realization of the true nature of phenomena."[2]

Dzogchen Pönlop Rinpoche evokes an extended poetic metaphor from Milarepa to qualify vipashyana (as qualitatively different to shamatha) as having the propensity to "eradicate" klesha:

"Insight, or vipashyana (lhagthong), is extremely important because it can eradicate the mental afflications, whereas tranquility [shamatha] alone cannot. That is why we want to be able to practice tranquility and insight in a unified manner. This unified practice has three steps; first, we practice tranquility; then we practice insight; and then we bring the two together. Doing this will eradicate the cause of samsara (which is mental afflictions), thereby eradicating the result of samsara (which is suffering). For this reason, it is improper to become too attached to the delight or pleasure of tranquility, because tranquility alone is not enough. As was said by Lord Milarepa in a song:


"Not being attached to the pool of tranquility
May I generate the flower of insight."[3]

Vipassana is a practice often taken up in prison, especially in Myanmar.[4] In 1993, Kiran Bedi, a reformist Inspector General of India's prisons, learned of the success of Vipassanā in a jail in Jainpur, Rajasthan. A ten-day course involved officials and inmates alike. In India's largest prison, Tihar Jail, near New Delhi, another attempt was made. This program was said to have dramatically changed the behavior of inmates and jailers alike. It was actually found that inmates who completed the ten-day course were less violent and had a lower recidivism rate than other inmates. This project was documented in a television documentary.[5]

So successful was this program that it was adopted by correctional facilities in the United States and other countries as well. Unfortunately, the prisoners involved in the study were a biased sample, due to the fact that they volunteered for the program. Additionally, many who were told they would miss the Super-Bowl if they joined the program chose not to participate. Therefore, it is possible that only prisoners who were willing to make a significant personal sacrifice to "improve" themselves participated in the study.

Today, the term "Vipassanā" also refers to a series of meditation techniques used by many branches of modern Theravāda Buddhism, for example in modern Sri Lanka, Burma, Laos and Thailand, and to a specific branch of Buddhism popularized by S. N. Goenka and his mentor U Ba Khin as a nonsectarian form of Buddhism, and also by Americans Joseph Goldstein, Sharon Salzberg, and Jack Kornfield (who were inspired by the monks Mahasi Sayadaw and Ajahn Chah) under the rubric "insight meditation."

Retrieved from https://www.newworldencyclopedia.org/p/index.php?title=Vipassana&oldid=1040784
Categories:
Hidden category:
This page was last edited on 14 August 2020, at 20:21.
Content is available under Creative Commons Attribution/Share-Alike License; additional terms may apply. See Terms of Use for details.