Nāgārjuna (c. 150 – 250 C.E.) was arguably the most influential Indian Buddhist thinker after Gautama Buddha, who founded the Madhyamaka (Middle Way) school of Mahāyāna (Great Vehicle) Buddhism. He is credited with writing the most eloquent expositions of śūnyatāvada (the doctrine of emptiness), was the first to propose the two-truths doctrine, and was an abbot of the famous Buddhist university, Nalanda. Nagarjuna's writings had a major influence not only on the development of Mahayana Buddhist thought, but also in triggering Hindu responses to Buddhism (particularly evidenced in Advaita). Furthermore, Nagarjuna's ideas spawned the Three Treatise (Sanlun) School in China, and he is considered to be a "second Buddha" in Tibet (Ray 2002, 82). Nagarjuna is often mischaracterized as a nihilist due to his radical rejection of "self." Closer inspection, however, reveals in Nagarjuna the profound grasp of existence as interdependence, the interpenetration of self and other. 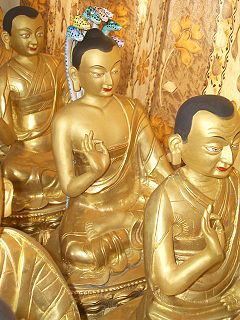 According to the Indian historian Kumarajiva (344–413 C.E.), Nagarjuna was born in South India near the town of Nagarjunakonda in what is present-day Andhra Pradesh into a wealthy Hindu Brahmin family. His Hindu upbringing may account for the fact that Nagarjuna was one of the earliest significant Buddhist thinkers to write in the Sanskrit language rather than in the Pali script. Tibetan records report that he was inspired early in his life by the conflict and turmoil in his region to give away all of his wealth and become a Buddhist monk. During his lifetime he was the abbot of the Buddhist university, Nalanda, located in the present-day state of Bihar, India, and became renowned as a master of the five major branches of traditional Buddhist learning (grammar, logic and epistemology, the arts, medicine, and spiritual practice). After composing his written works at Nalanda, he was inspired by a vision of the bodhisattva Tara to renounce the comfort and status of his position at the university and to "wander forth in search of realization" (Ray 2002, 394–395).

From a study of his writings, it is clear that Nagarjuna was conversant with both the Abhidharma-based philosophies of his day and the emerging Mahāyāna tradition, as well as non-Buddhist schools of thought (Ray 2002, 394). Judging by the contents of the most commonly accepted list of texts he wrote, he was clearly a Māhayānist, although he does not mention any of Mahāyāna texts in his most famous work, the Mulamadhyamakakarika (Fundamental Verses on the Middle Way, abbreviated MMK). As a result, some Western scholars have argued that he may have been a Theravadin. However, the fact that his Mulamadhyamakakarika text focuses on explicating one of the central concepts of Mahāyāna (i.e., śūnyatā or emptiness), definitively shows that he was a follower of the Great Vehicle (Gyamtso 2003, xi). His exclusive use of the Tripitaka in the MMK likely results from him wanting to make a convincing case to the Stahaviravadin Buddhists who would not have accepted the premises or authority of the Mahāyāna texts, thus negating their usefulness as authoritative references. It could also be argued that the text was meant to serve as a logical stepping-stone to Second Turning of the Wheel teachings, by beginning with the premises of the First Turning in order to guide readers to the Second.

Popular legends of Nagarjuna's life state that he traveled deep into the earth through his meditative powers (siddhi) to the lair of the nāga king, who had been entrusted by the Buddha with the Prajñā Pāramitā Sutras. Seeing that Nagarjuna was the one prophesied by Gautama who would "give vast and perfect explanations of the Buddha's teachings" (Gyamtso 2003, ix), he gave these texts to him to bring back to the surface. This story is used to explain the first part of his name (the second, arjuna, meaning “bright,” “shining,” or “silver”), his close association with the Prajñā Pāramitā Sutras, and his depiction in iconography with snakes extending over his head (see photo).

Nagarjuna's primary contribution to Buddhist philosophy was his eloquent elucidation of the doctrine of śūnyatā, or "emptiness," which he taught as the logical extension of the Buddha's thought, particularly the doctrines of anatman (no-self) and pratītyasamutpāda (dependent origination). Typical of his method was the use of reductio ad absurdum (Sanskrit prasanga) (Mitchell 2002, 132). The pivotal chapter 24 of the MMK begins by outlining the objections to the doctrine of emptiness that he anticipated from Theravadin thinkers:

If all these [things] are empty,
Nothing can arise and nothing can disintegrate.
Consequently the Four [Noble] Truths
Will not be there for you.

…And because the [Noble] Truths will be non-existent,
The sublime dharma will also not be there.

In short, he believed they would accuse him of being nihilistic. However, he explains that it is because of them "not realizing the purpose of emptiness, its nature and the meaning" (Ibid., 26) that they attribute these logical faults to him. Nagarjuna goes on to explain that the logical conclusion of the Buddha's teaching of pratītyasamutpāda (co-dependent origination) is not only that people are empty of ātman or independent existence, but that all things are without any svabhāva ("self-nature"), and thus are empty of inherent being:

Whatever is dependently arisen
Is explained to be emptiness.
Its existence is imputed in dependence upon something else
And this is the path of the Middle Way (Madhyamaka). (Gyamtso 2003, 157)

It is important to clarify that Nagarjuna's philosophy, far from being nihilistic, is in fact tremendously life-affirming. He argues that if people existed in complete independence from other phenomena and had an unchanging essence, they could not come into being (we require a cause, such as our parents), nor could we ever grow or have new experiences. People would either always be in a state of suffering or always in a state of happiness (or some other state), and that those that are not already Buddhas could never become one.

One example of his use of the prasanga method is again found in chapter 24 of the MMK:

If you view things
As arising from inherent existence,
Then you are viewing things
As having no causes and conditions. (CTAO 2004, 27)

Here he is pointing out the logical contradiction of believing that things are self-existent. If they were so, their creation could not be dependent on something else—that would negate their separate existence. If one argues that things have an essential nature, one must therefore give up the belief in causality—the two are logically incongruous. Thus the idea of svabhava is reduced to its absurd logical conclusion—the abandonment of causality—which is a logical (logic depends on causality) and practical (one must assume that eating will satiate hunger) impossibility. However, this argument does raise the interesting question of how one could simultaneously hold that all things are devoid of self-nature, and that there is causality at all. To answer this seeming paradox, Nagarjuna put forth the two-truths doctrine.

Nagarjuna was the first philosopher to propose the two-truths doctrine, which postulates that there are two types of truth, the "absolute truth" (paramārtha satya) of śūnyatā, and the "relative truth" (saṃvṛti satya) of appearances. This is another key area where Nagarjuna is seen as not a nihilist. He argued that the world of names and forms (namarupa) does indeed exist, but only as appearances, not as something which is substantially real. They are "neither non-existent nor permanent" (CTAO 2004, 24). In order to understand the true nature of the phenomenal world, people must understand emptiness. Likewise, it is the world of logic and forms that leads people to understand śūnyatā. Furthermore, without forms there is no emptiness, and without emptiness there are no forms. Thus even the two truths are dependently arisen. Realization of this is said to lead to direct perception of "tathata" or suchness, which Tibetans refer to as the union of luminosity (appearances) and emptiness. This is the heart of Madhyamaka—the Middle Way between the extremes of nihilism and eternalism.

There are a number of influential texts attributed to Nagarjuna, although many were likely written by later authors. The only text that all scholars agree was written by him is the Mūlamadhyamakakārik&#257, which contains the essentials of his thought in 27 short chapters.

Many other works are attributed to Nagarjuna, some of which may be genuine and some not. There is evidence that a second, later Nagarjuna was the author of a number of tantric works that have subsequently been incorrectly attributed to the original Nagarjuna. The problem of making a complete compilation of his works is further exacerbated by the phenomena of future authors signing their works in his name as a sign of their reverence for him.

Other works attributed to Nagarjuna are:

Influence on the development of Buddhism

Nagarjuna's writings would do more than any other thinker to shape the discourse in Mahāyāna Buddhist schools in India for over 700 years after his passing. His influence continues to be felt (albeit to a lesser degree) in the rest of Asia up to the present day. His works (most notably the MMK and Precious Garland) would have their most profound effect in Tibet, where they continue to be prized as the words of a "second Buddha." His teachings are often given as preliminary instructions during tantric initiations, and his debating style is still utilized in Tibetan monasteries.

Shankara, founder of the Hindu school of Advaita Vedanta, was often accused by his contemporaries as being a "closet Madhyamikan" because of the similarity between his philosophy and Nagarjuna's. A key difference between their beliefs was that for Shankara, the underlying force of Brahman was needed to unite self (atman) and the cosmos, while for Nagarjuna, people are already connected at all levels (i.e., matter, mind, and spirit) through interdependent arising.