A decimal (or denary) system is a numeral system that has the number ten as its base. The term decimal is also used for a number written in this system, or for a fraction expressed using this system.

A number written in decimal notation involves the use of one or more of ten distinct symbols or fundamental units, called digits. The digits are often used with a decimal separator, which indicates the start of a fractional part. The decimal separator may be a dot, a period, or a comma.

The decimal system is the most widely used numeral system. It can be used to represent any number, no matter how large or small. In addition, it greatly simplifies arithmetical operations, a feature that is especially apparent when compared with the system of using Roman numerals. The decimal system forms the basis of the metric system of weights and measures, and it has been tapped to express the currencies of most nations of the world. 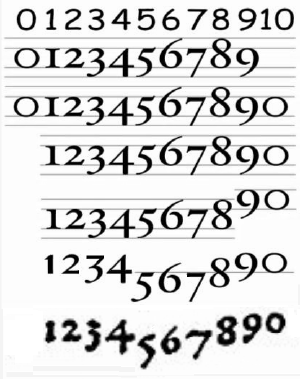 In the decimal system, the ten fundamental units that are currently in widespread use around the globe are: 0, 1, 2, 3, 4, 5, 6, 7, 8, and 9. These ten symbols are called Arabic numerals by Europeans and Indian numerals by Arabs, the two groups' terms referring to the culture from which they learned the system. However, the symbols used in different areas are not identical. For instance, Western Arabic numerals (from which the European numerals are derived) differ from the forms used by other Arab cultures.

The decimal system is a positional numeral system; it has positions for units, tens, hundreds, and so forth. The position of each digit conveys the multiplier (a power of ten) to be used with that digit—each position has a value ten times that of the position to its right. For a mixed number (a number that is the sum of a whole number and a proper fraction), a decimal separator is used to separate the integer part from the fractional part. In English-speaking countries, a dot (·) or period (.) is used as the decimal separator; in many other languages, a comma is used. In addition, each number is preceded by one of the sign symbols, + or −, to indicate positive or negative sign, respectively.

The number ten is the count of the total number of fingers and thumbs on a person's two hands (or toes on two feet). In many languages, the word digit or its translation is also the anatomical term referring to fingers and toes. In English, the term decimal (from Latin decimus) means "tenth," decimate means "reduce by a tenth," and denary (Latin denarius) means "the unit of ten."

There were only two truly positional decimal systems in ancient civilization: the Chinese counting rods system and the Hindu-Arabic numeric system. Both required no more than ten symbols. Other numeric systems required more or fewer symbols.

A decimal fraction is a fraction in which the denominator is a power of ten.

The integer part (or integral part) of a decimal number is the part to the left of the decimal separator. The part to the right of the decimal separator is the fractional part; if considered as a separate number, a zero is often written in front. If the absolute value of a decimal number is less than one, it is usually expressed with a leading zero.

Any rational number that cannot be expressed as a decimal fraction has a unique infinite decimal expansion ending with recurring decimals.

Other prime factors in the denominator give longer recurring sequences. For instance, see 7 and 13.

That a rational number must have a finite or recurring decimal expansion can be seen as a consequence of the long division algorithm, in that there are only q-1 possible nonzero remainders on division by q, so that the recurring pattern will have a period less than q. For instance to find 3/7 by long division:

Every real number has a (possibly infinite) decimal representation. That is, it can be written as

Such a sum converges as i decreases, even if there are infinitely many nonzero ai.

Rational numbers (e.g. p/q) with prime factors in the denominator other than 2 and 5 (when reduced to simplest terms) have a unique recurring decimal representation.

and a version of this holds for irrational-base numeration systems as well, such as the golden mean base representation.

The following is a chronological list of writers and textual materials on decimals.

A straightforward decimal system, in which 11 is expressed as ten-one and 23 as two-ten-three, is found in Chinese languages except Wu, and in Vietnamese with a few irregularities. Japanese, Korean, and Thai languages have imported the Chinese decimal system. Many other languages with a decimal system have special words for the numbers between 10 and 20, and decades.

Incan languages such as Quechua and Aymara have an almost straightforward decimal system, in which 11 is expressed as ten with one and 23 as two-ten with three.

Some psychologists suggest irregularities of numerals in a language may hinder children's counting ability[7].

Peoples of various cultures in history have used alternative numeral systems. Pre-Columbian Mesoamerican cultures, such as the Maya, used a vigesimal system (using all twenty fingers and toes); the Babylonians used a sexagesimal (base 60) system; and the Yuki tribe reportedly used an octal (base 8) system. Also, some Nigerians have used several duodecimal (base 12) systems.

Computer hardware and software systems commonly use a binary representation, internally. For external use by computer specialists, this binary representation is sometimes presented in the related octal or hexadecimal systems. For most purposes, however, binary values are converted to the equivalent decimal values for presentation to and manipulation by the public.