2 (two) is a number, numeral, and glyph that represents the number. It is the natural number[1] that follows 1 and precedes 3. It is an integer and a cardinal number, that is, a number that is used for counting.[2] In addition, it is classified as a real number,[3] distinguishing it from imaginary numbers.

The number two also represents a pair or duality. In biology, sexual reproduction requires the mating of two organisms, male and female, or the uniting of materials provided by male and female organisms. Eastern philosophy points to such dual characteristics as masculinity and femininity (in the animate world), or positivity and negativity (in the inanimate world), and categorizes them as Yang and Yin (in Chinese). Although some consider good and evil as an example of Yang-Yin characteristics, there is a fundamental difference: evil (such as hatred and violence) flourishes by destroying goodness (such as love and kindness), whereas male and female flourish and multiply their kind by uniting in harmony and love.

In fonts with text figures, 2 usually has the same height as a lowercase X, for example,

Two has many properties in mathematics.[5] An integer is called even if it is divisible by 2. For integers written in a numeral system based on an even number, such as decimal and hexadecimal, divisibility by 2 is easily tested by merely looking at the one's place digit. If it is even, then the whole number is even. In particular, when written in the decimal system, all multiples of 2 will end in 0, 2, 4, 6, or 8.

Two is the smallest and first prime number, and the only even one. (For this reason, it is sometimes humorously called "the oddest prime".) The next prime number is three. Two and three are the only two consecutive prime numbers. 2 is the first Sophie Germain prime, the first factorial prime, the first Lucas prime, and the first Smarandache-Wellin prime. It is an Eisenstein prime with no imaginary part and real part of the form

. It is also a Stern prime, a Pell number, and a Markov number, appearing in infinitely many solutions to the Markov Diophantine equation involving odd-indexed Pell numbers.

It is the third Fibonacci number, and the third and fifth Perrin numbers.

Vulgar fractions with 2 or 5 in the denominator do not yield infinite decimal expansions, as is the case with most primes, because 2 and 5 are factors of ten, the decimal base.

For any number x:

Two is the only number x such that the sum of the reciprocals of the powers of x equals itself. In symbols:

This comes from the fact that:

Powers of two are central to the concept of Mersenne primes, and important to computer science. Two is the first Mersenne prime exponent.

Taking the square root of a number is such a common mathematical operation, that the spot on the root sign where the exponent would normally be written for cubic roots and other such roots, is left blank for square roots, as it is considered tacit.

The square root of two was the first known irrational number.

The smallest field has two elements.

In the set-theoretical construction of the natural numbers, 2 is identified with the set

. This latter set is important in category theory: it is a subobject classifier in the category of sets.

Two is the number of n-Queens Problem solutions for n = 4. With one exception, all known solutions to Znám's problem start with 2.

Two also has the unique property such that:

for a not equal to zero

Two has a connection to triangular numbers:

The number of domino tilings of a 2×2 checkerboard is 2.

In the structures of many living organisms (especially mammals), various features occur in pairs. Examples include: eyes, ears, nostrils, jaws, forelegs (or arms), hind legs, lungs, kidneys, and so forth.

Studies in molecular biology have shown that each molecule of DNA usually consists of two polynucleotide strands that form a double helix.

There are two opposite and complementary electrical charges: positive and negative. Both are needed and work together in the formation of atoms and molecules.

There are two opposite and complementary magnetic poles: north and south. Both play a part in setting up a magnetic field.

In the electronic configuration of an atom, a maximum of two electrons (of opposite spin) may occupy a given orbital at any instant.

In nuclear physics, 2 is the first magic number. A magic number (in this case) is the number of nucleons (protons and neutrons) in the atomic nucleus, such that they are arranged into complete shells in the nucleus.[6]

In religion, philosophy, and culture

In Eastern philosophy, a well-known dualism is that of Yang and Yin (in Chinese), or Yang and Eum (in Korean). They stand for pairs of characteristics such as masculinity and femininity, or positivity and negativity. Some consider good and evil as an example of Yang-Yin characteristics, but there is a fundamental difference: evil (such as hatred and violence) flourishes by destroying goodness (such as love and kindness), whereas male and female flourish by uniting in harmony.

In Marxist ideology, a pair known as "thesis" and "antithesis" have to clash with each other for progress to occur. This philosophy, however, became a justification for class warfare, in which the "lower class" were encouraged to destroy the "upper class." By contrast, various major religions place value on all people, regardless of class, encouraging harmony among people guided by God's love. 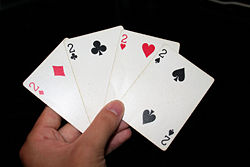 The twos of all four suits in playing cards.

Two (二, èr) is a good number in Chinese culture. There is a Chinese saying "good things come in pairs." It is common to use double symbols in product brand names, such as double happiness, double coin, double elephants, and so forth. Cantonese people like the number two because it sounds the same as the word "easy" (易) in Cantonese.