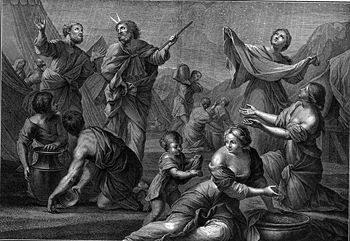 Moses with the Israelites collecting manna as it falls from heaven

Manna was miraculously produced food of the Israelites in the desert during the Exodus. According to the biblical story, the term originated from the mysterious nature of the food, as the Israelites asked "man hu"—translated as "what is it?" or "Is this manna?" Forming like hoarfrost on the ground and either white or brownish in color, manna was gathered each morning by the Israelites, except on the sabbath. It is described as tasting either like bread, oil, or (in the case of infants) milk. Manna became a source of irritation for some of the Israelites, however, and they complained bitterly, wishing they could return to Egypt where the diet was more varied.

Manna reportedly sustained the Israelites through the 40 years in the wilderness and ceased to appear when they first harvested their crops near their new homeland. Various modern opinions exist about natural substances that may have been the source of the legend of manna from heaven. By extension "manna" has also been used to refer to any divine or spiritual nourishment. 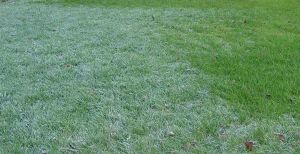 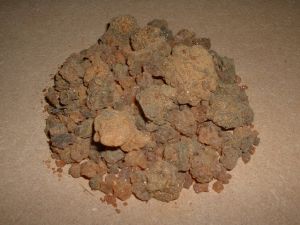 According to the Bible, the mysterious substance called manna descended by night like hoarfrost in the form similar to tiny coriander seeds of the color of bdellium (Book of Numbers 11:7).[1] It was collected before sunrise, before it melted in the sun. The people ground it, or pounded it, and then baked it (Num. 11:8).

Not only was the provision of the manna miraculous, but the substance itself also had several miraculous qualities. The quantity collected made one daily portion for every person. In accordance with the commandment that no work be done on the sabbath, a double portion was to be found and collected on the day before the sabbath, while none was to be found on the sabbath day itself. When the Hebrews neared Canaan and arrived at Gilgal and began to eat the grain grown there, the manna ceased.

In order to perpetuate the memory of God's providing the manna, the high priest Aaron, the brother of Moses, was commanded to put one daily portion of manna in a vessel and place it before the Ark of the Covenant in the Tabernacle (Ex. 1617-1635; Josh. 5:10-12). The New Testament records that this pot, with manna in it, was stored inside the Ark, along with Aaron's staff that had budded, and the Ten Commandments (Hebrews 9:4).

Manna was also involved in a major problem in the relationship between the Israelites and God, as some of the Israelites complained about the monotony of a diet consisting mainly of this food. According to the Book of Numbers:

The rabble with them began to crave other food, and again the Israelites started wailing and said, "If only we had meat to eat! We remember the fish we ate in Egypt at no cost—also the cucumbers, melons, leeks, onions and garlic. But now we have lost our appetite; we never see anything but this manna! (4-6)

These complaints angered God and caused Moses to lose patience, declaring to God: "Why have you brought this trouble on your servant? What have I done to displease you that you put the burden of all these people on me?" God responded by sharing the prophetic gift he had given to Moses with 70 of Israel's elders and sending a huge flock of low-flying quail as well as the manna for the people to eat. However, when the people greedily gathered up ten days worth of quail, God grew angry and struck the Israelites with a severe plague.

In Christian tradition, manna represented the body of Jesus Christ, and thus foreshadowed the bread of the Eucharist which is believed in Catholic tradition to be the actual flesh of Jesus, and in most Protestant traditions to symbolize Jesus' body: In the talmudic tradition, manna was one of the ten things created on the first Friday of Creation, in the twilight (Abot 5:9). To feed 600,000 Israelite men and their families, it fell in great quantity, rabbinical opinions ranging from 50 cubits (75 feet) to 200 cubits (300 feet) in depth. It was so conspicuous that all the kings of the East and West could see it from their palaces (Yoma 76a).

One tradition holds that it fell so that the righteous had no trouble in gathering it, finding it at the doors of their tents; but doubters had to go farther for it; and sinners had to go far from the camp to gather it (Yoma 75a). As is often the case in rabbinical literature, an opposite view is also given (Tan., Beshallaḥ, 22): The diligent went out into the field to gather the manna, the less disciplined went just outside their tents, and the lazy and indolent simply remained at their sleeping places while the manna fell into their outstretched hands. One opinion states that manna was created only for the children of Israel, and others could not secure even a handful of manna, as it slipped from the grasp of non-Israelites (Sifre, Deut. 313). However, another tradition affirmed that manna actually tasted bitter to the Gentiles (Tan., 50.c.).

The melting of the manna formed streams which furnished drink to many deer and other animals. Precious stones fell along with the manna every morning (Yoma 50.c.). The manna was adapted to the taste of each individual; to the adult it tasted like the food of the adult, while to the infant it tasted like the milk of its mother's breasts. By wishing, one could taste in the manna anything desired.[2] 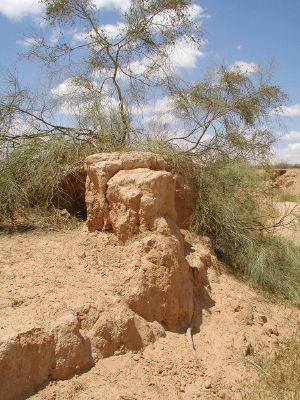 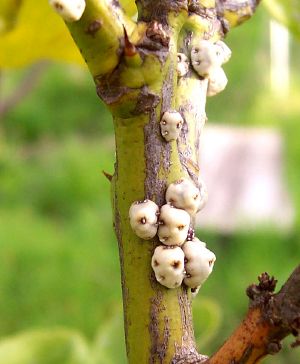 Just as the Israelites originally gave manna its name by asking "What is it?" so a wide range of modern speculation exists as to the true nature of the substance. The strict biblical view is that manna was both miraculous and unique, not a naturally occurring phenomena at all. However, a common modern opinion is that the story of manna is derived from the natural occurrence of and edible sap of a succulent plant found in the Sinai peninsula, which may have had appetite-suppressing effects. Indeed, plants of the genus Alhagi are sometimes called "manna trees." [3]

Others hold that manna is the honeydew secretion of scale insects feeding on tamarisk twigs, or thalli of the so-called manna Lichen (Lecanora esculenta). In the environment of a desert, such honeydew rapidly dries due to evaporation of its water content, becoming a sticky solid, and later turning whitish, yellowish, or brownish; honeydew of this form is considered a delicacy in the Middle East, and is a good source of carbohydrate.[4] At the turn of the twentieth century local Arabs in Palestine collected the resin of the tamarisk tree as mann es-sama ("heavenly manna"), and sold it to pilgrims.

Still others have hypothesized that manna was one of the species of kosher locusts found in the region. [5]Some have even speculated that psilocybe mushrooms are the prime candidate in Manna's accurate identification. [6]

In Christian tradition, the remains of Saint Nicholas (the historical saint who Santa Claus is based on) secrete a clear liquid that is called "manna," from inside the tomb.