This article is about the chemical element lithium.

Lithium (chemical symbol Li, atomic number 3) is the lightest solid chemical element and a member of the group of elements known as alkali metals. It is flammable, corrosive to the skin, and readily reacts with water and air. Pure lithium is soft and silvery white in color, but it tarnishes rapidly. It is one of only four elements theorized to have been created in the first three minutes of the origin of the universe, through a process called "Big Bang nucleosynthesis."

Lithium, its alloys, and compounds have a wide range of applications. For instance, lithium is used in specialized rechargeable batteries, alloys for aircraft parts, and appliances like toasters and microwave ovens. Lithium niobate is used in mobile phones, lithium stearate is a high-temperature lubricant, lithium hydroxide is an efficient air purifier, and lithium chloride and bromide are used as desiccants. In addition, lithium salts are used in mood-stabilizing drugs.

Toward the end of the 1700s, Brazilian scientist José Bonifácio de Andrada e Silva discovered the lithium-containing mineral petalite (LiAl(Si2O5)2) on a trip to Sweden. When Johan Arfvedson analyzed a petalite ore in 1817, he discovered lithium. In 1818, Christian Gmelin was the first to observe that lithium salts give a bright red color when held in a flame. Both Arfvedson and Gmelin tried to isolate the element from its salts but failed.

The name "lithium" (from the Greek λιθoς (lithos), meaning "stone") was chosen apparently because it was discovered from a mineral, while other common alkali metals were first discovered from plant tissue.

The Earth's crust contains about 65 parts per million (ppm) of lithium. The element is widely distributed in nature, but because of its reactivity, it is always found combined with other elements.

Lithium production has greatly increased since the end of World War II. The metal is separated from other elements in igneous rocks, and is also extracted from the water of mineral springs. Lepidolite, spodumene, petalite, and amblygonite are the more important minerals containing it. 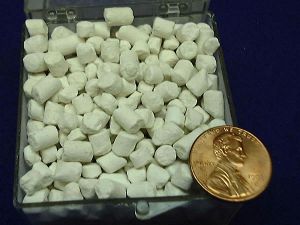 Lithium leads the family of elements known as "alkali metals" in group 1 of the periodic table. Two well-known elements in this group are sodium and potassium. Lithium is also at the start of period 2, located just before beryllium. The atomic number of lithium is 3, which places it right after helium (atomic number 2). Thus lithium is the lightest metallic element.

Like all other alkali metals, lithium has a single electron in its outermost shell, and it can readily lose this electron to become a positive ion. For this reason, lithium readily reacts with water and does not occur freely in nature. Nevertheless, it is less reactive than the chemically similar sodium.

Lithium is soft enough to be cut with a knife, though this is significantly more difficult to do than cutting sodium. The fresh metal has a silvery color, but it rapidly tarnishes to black in the air. Lithium has only about half the density of water, because of which sticks of this metal have the odd heft of a light wood such as balsa.

In its pure form, lithium is highly flammable and slightly explosive when exposed to water and air. It is the only metal that reacts with nitrogen at room temperature. Lithium fires are difficult to extinguish, requiring special chemicals designed to smother them. For these reasons, storage of lithium in the laboratory involves placing sticks of the metal in jars of nonreactive, liquid hydrocarbons. Given their low density, the sticks tend to float, so they need to be held down mechanically by the lid of the jar and other sticks.

When placed over a flame, lithium gives off a striking crimson color, but when it burns strongly, the flame becomes brilliant white. Lithium has a high specific heat capacity (3582 J/(kg·K)), which means that a large amount of heat is required to raise the temperature of a unit mass (1 kilogram or 1 gram) of the substance by 1 kelvin. In addition, its liquid form has a great temperature range. These properties make lithium a useful chemical.

In humans, lithium compounds play no natural biological role and are considered slightly toxic. The metal is corrosive to the touch and requires special handling to avoid skin contact. By contrast, lithium (in the ionic form) appears to be an essential trace element for goats and possibly rats. When used as a drug, blood concentrations of Li+ must be carefully monitored.

Naturally occurring lithium is composed of 2 stable isotopes, 6Li and 7Li, of which the latter is the more abundant (92.5% natural abundance). In addition, seven radioisotopes have been characterized. Among them, 8Li has a half-life of 838 milliseconds (ms), 9Li has a half-life of 178.3 ms, and the others have half-lives that are less than 8.6 ms. The shortest-lived isotope of lithium is 4Li, which decays through proton emission and has a half-life of 7.58043x10-23 seconds.

According to the "Big Bang" model of the origin of the universe, the nuclei of 7Li were among the few types of atomic nuclei formed shortly after the Big Bang, during a phase called the "Big Bang nucleosynthesis" ("nucleosynthesis" refers to the synthesis of atomic nuclei). It is thought that the nuclei of hydrogen, helium, and beryllium atoms were also formed at that time.

Given that the specific heat capacity of lithium is higher than that of any other solid, lithium is used in heat-transfer applications, such as in toasters and microwave ovens. It is also an important material in rechargeable lithium ion batteries. Besides being lighter than the standard dry cells, these batteries produce a higher voltage (3 volts versus 1.5 volts). Additional uses of lithium, its alloys, and its compounds are as follows:

Trends in consumption and production

Consumption of lithium increased by 4-5 percent per year between 2002 and 2005, driven by the demand in lithium secondary batteries. Batteries accounted for 20 percent of total consumption in 2005, a rise from under 10 percent in 2000.

Continued expansion in the portable electronic products market and commercialization of hybrid electric vehicles using lithium batteries suggest growth of up to 10 percent per year in lithium carbonate consumption in this market through 2010.

Between 2002 and 2005, lithium minerals production rose by 7 percent per year to reach 18,800 tons lithium. Chile and Australia account for over 60 percent of total output. China may emerge as a significant producer of brine-based lithium carbonate by 2010. Potential capacity of up to 45,000 tons per year could come on-stream if projects in Qinghai province and Tibet proceed [1].

Some jurisdictions limit the sale of lithium batteries, which are the most readily available source of lithium metal for regular consumers. Lithium can be used to reduce pseudoephedrine and ephedrine to methamphetamine by the Birch reduction method, which employs alkali metals dissolved in ammonia. The effectiveness of such restrictions in controlling the illegal production of methamphetamine remains indeterminate and controversial.

Retrieved from https://www.newworldencyclopedia.org/p/index.php?title=Lithium&oldid=1084542
Categories:
Hidden category:
This page was last edited on 29 October 2022, at 04:29.
Content is available under Creative Commons Attribution/Share-Alike License; additional terms may apply. See Terms of Use for details.