Balsa is the common name for a fast-growing, tropical American tree, Ochroma pyramidale (synonym O. lagopus), characterized by soft and light wood. The name also is used for the wood of this species, which is commercially important, and despite being very soft, is classified as a hardwood—the softest commercial hardwood.

As a light, soft, and buoyant wood, with good insulating properties, balsa provides innumerable uses, from use in life preservers and floats, to model building, to fishing lures, to insulation use in refrigerators. Ecologically, balsa trees provide food for bats in a symbiotic relationship tied to pollination of the trees. 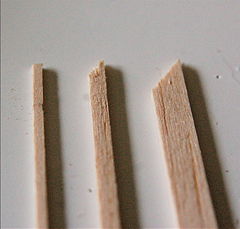 Balsa, Ochroma pyramidale, has traditionally been classified in the Bombacaceae family. However, Bombacaceae is not universally recognized as the rank of the family, and is sometimes treated as a subfamily within the family Malvaceae. For example, Bombacaceae is not recognized by the Angiosperm Phylogeny Group I (1998), II (2003), and Kubitzki system (2003), at the rank of family, the bulk of the taxa in question being treated as subfamily Bombacoideae within family Malvaceae sensu lato. A close relationship between Bombacaceae and Malvaceae has long been recognized but until recently the families have been kept separate in most classification systems, and continue to be separated in many references, including the newest reference work in the classification of flowering plants (Heywood, et al. 2007). Heywood et al. (2007) state "although closely related to Malvaceae, molecular data supports their separation."

Balsa is native to tropical South America as far north as southern Mexico and as far south as Brazil. It is found in the Caribbean as well.

Balsa is a large, fast-growing tree that can grow up to 30 meters tall. Its trunk tends to be very cylindrical and straight, though it may gently curve, and the trunk size may reach up to one meter in diameter (CDS 2007). Even three-year old balsas may be seven meters tall (CDS 2007).

Balsa is evergreen, or dry-season deciduous if the dry season is long, with large (30 to 50 centimeter) weakly palmately lobed leaves. The leaves are covered with epidermal hairs (CDS 2007). The stout petioles supporting the leaves may themselves be 37 centimeters long (CDS 2007). The flowers are large and whitish, yellowish, or brownish. They begin as large buds whose calyx is formed from five fused sepals that cover the developing petals; these unopened flowers resemble ice cream cones in shape and in size (12 centimeters long by nine centimeters in diameter) (CDS 2007). When the flower opens, the five white petals bend backward, covering the calyx; the petals gradually change from white to yellow to burgundy (CDS 2007). Fruits grow from old flower calyxes and appear as long, green rods (20 centimeters by three centimeters).

Balsa is pollinated by bats. The flowers open for the first time only at night, and by day are eaten by various birds (macaws, parrots, honeycreepers), with parrots also eating the green pods (CDS 2007).

The timber is very soft and light with a coarse open grain. The density of dry balsa wood ranges from 100–200 kg/m³, with a typical density of about 140 kg/m³ (about one third the density of other kinds of hard wood). The tree must be keep free from adverse conditions and injury to maintain its commercial value, otherwise it can become heavier or harder in texture. Older trees also develop a water-storing capacity in their cores (called "water heart") that ruins the wood (CDS 2007). 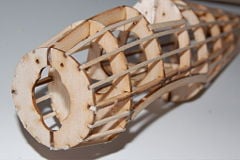 Frame of a model airplane constructed entirely of balsa wood.

Balsa wood is light, soft, and buoyant. It is even lighter than cork and thus has long been used for lifebelts, and life preservers. It was famously used by Thor Heyerdahl in his raft Kon-Tiki. Indeed, the name balsa derives from Spanish for a raft.

As a light and soft material, it is also a very popular material for model building. As cork is low in density but high in strength, it is also used when making wooden crankbaits (fishing lures) for fishing.

Balsa wood has good insulating properties, and thus is used for refrigerators, and cold-storage rooms, and it also is good for insulating for sound.

Balsa wood is used to make very light, stiff structures in model bridge tests and for the construction of light wooden airplanes, most famously the World War II de Havilland Mosquito. In modern airplanes, it is used for constructing passenger compartments. Balsa also is used in the floorpan of the Chevrolet Corvette Z06 sandwiched between two sheets of carbon fiber. In table tennis blades, a balsa layer is typically sandwiched between two pieces of thin plywood. Balsa wood is also used for making high-quality balsa surfboards.