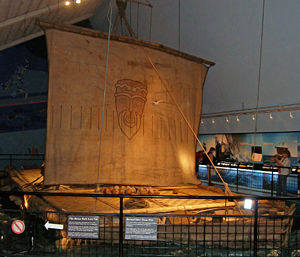 The raft in the Kon-Tiki Museum, Oslo

Kon-Tiki was the raft used by Norwegian explorer and writer Thor Heyerdahl in his 1947 expedition from Peru to the Tuamotu Islands. It was named after the Inca sun god, Viracocha, for whom "Kon-Tiki" was said to be an old name. Kon-Tiki is also the name of the popular book that Heyerdahl wrote about his adventures.

Heyerdahl believed that people from South America could have settled Polynesia in the South Pacific in Pre-Columbian times. His aim in mounting the Kon-Tiki expedition was to show, by using only the materials and technologies available to these people at the time, that there were no technical reasons to prevent them from having done so.

Heyerdahl and a small team went to Peru, where they constructed a balsa-wood raft out of balsa logs and other native materials in an indigenous style, as recorded in illustrations by Spanish conquistadors. This trip began on April 28, 1947. Accompanied by five companions, Heyerdahl sailed it for 101 days over 4,300 miles across the Pacific Ocean before smashing into the reef at Raroia in the Tuamotu Islands on August 7, 1947. The only modern equipment they had was a radio.

The book Kon-Tiki was a best-seller, and a documentary motion picture of the expedition won an Academy Award in 1951. The original Kon-Tiki raft is now on display in a museum of the same name in Oslo, Norway. 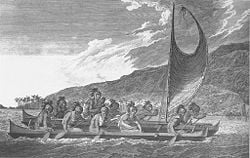 The main body of the raft was composed of nine balsa tree trunks up to 45 feet long and two feet in diameter that were lashed together with one and a quarter inch hemp ropes. Cross-pieces of balsa logs 18 feet long and one foot in diameter were lashed across the logs at three feet intervals to give lateral support. Pine splashboards clad the bow, and lengths of pine one inch thick and two feet long were wedged between the balsa logs and used as centerboards.

The main mast was made of lengths of mangrove wood lashed together to form an A-frame 29 feet high. Behind the main-mast was a cabin of plaited bamboo 14 feet long and eight feet wide that was built about four to five feet high, and roofed with banana leaf thatch. At the stern was a 19-foot long steering oar of mangrove wood, with a blade of fir. The main sail was 15 by 18 feet on a yard of bamboo stems lashed together. Photographs also show a top-sail above the main sail and a mizzen-sail mounted at the stern.

The raft was partially decked in split bamboo. No metal was used in the construction.

The Kon-Tiki left Callao, Peru on the afternoon of April 28, 1947. It was initially towed 50 miles out to open water by the Fleet Tug Guardian Rios of the Peruvian Navy. She then sailed roughly west carried along on the Humboldt Current. The team’s first sight of land was the atoll of Puka-Puka on July 30. They made brief contact with the inhabitants of Angatau Island on August 4, but were unable to land safely. Three days later, on August 7, the raft struck a reef and was eventually beached on an uninhabited islet off Raroia Island in the Tuamotu group. They had traveled a distance of around 3,770 nautical miles in 101 days, at an average speed of 1.5 knots.

The Kon-Tiki was crewed by six men, all Norwegian except for Bengt Danielsson, who was from Sweden: 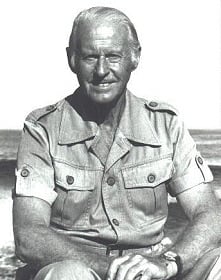 The whale shark, huge in size, hence its name, was so big that as it swam under the raft the explorers could see its huge, flat head on one side and its tail on the other. After about an hour of the whale shark circling the raft, a crew member rammed a harpoon into its skull. The whale shark simply broke the harpoon and swam away.

The Kon-Tiki adventure is often cited as a classic of "pseudoarchaeology," although its daring and inventive nature is still widely acclaimed. While the voyage was successfully demonstrated the seaworthiness of Heyerdahl's intentionally primitive raft, his theory that Polynesia was settled from South America did not gain acceptance by anthropologists. Physical and cultural evidence had long suggested that Polynesia was settled from west to east; migration having begun from the Asian mainland, not South America.

According to Heyerdahl, some Polynesian legends say that Polynesia was originally inhabited by two peoples, the so-called long-eared and the short-eared. In a bloody war, all the long-eared peoples were eliminated and the short-eared peoples assumed sole control of Polynesia. Heyerdahl asserted that these extinct people were the ones who could have settled Polynesia from the Americas, not the current, short-eared inhabitants. However one of the problems with this argument is that traditions involving long-ears and short-ears are found only at Easter Island, and are unknown in the rest of Polynesia.

Heyerdahl further argues in his book American Indians in the Pacific that the current inhabitants of Polynesia did indeed migrate from an Asian source, but via an alternate route. He proposes that Polynesians traveled with the wind along the North Pacific current. These migrants then arrived in British Columbia. Heyerdahl points to the contemporary tribes of British Columbia, such as the Tlingit and Haida, as the descendants of these migrants. Again Heyerdahl notes the cultural and physical similarities between these British Columbian tribes, Polynesians, and the Old World source. Heyerdahl notes how simple it would have been for the British Columbians to travel to Hawaii and even onward to the greater Polynesia from their New World stepping-stone by way of wind and current patterns.

Heyerdahl's claims aside, there is no evidence that the Tlingit, Haida, or other British Columbian tribes have any special affinity with Polynesians. Linguistically, their morphologically complex languages are about as far from Austronesian and Polynesian languages as it is possible to be, and their cultures demonstrate their undeniable links to the rest of the peoples of North America.

Anthropologist Robert C. Suggs included a chapter on "The Kon-Tiki Myth" in his book on Polynesia. He concludes:

The Kon-Tiki theory is about as plausible as the tales of Atlantis, Mu, and "Children of the Sun." Like most such theories it makes exciting light reading, but as an example of scientific method it fares quite poorly.

Other Projects by Heyerdahl

In 1955-1956, Heyerdahl organized the Norwegian Archaeological Expedition to Easter Island. With a staff that included several professional archaeologists, the expedition spent several months on the island investigating several of its profound mysteries. Highlights of the project include experiments in the carving, transport, and erection of the famous moai statues, and excavations at prominent sites such as Orongo and Poike. The expedition published two large volumes of scientific reports (Reports of the Norwegian Archaeological Expedition to Easter Island and the East Pacific) and Heyerdahl later added a third (The Art of Easter Island). The work of this expedition laid the foundation for much of the archaeological research that continues to be conducted on the island. Heyerdahl's popular book on the subject, Aku-Aku was another international best-seller.

The Boats Ra and Ra II 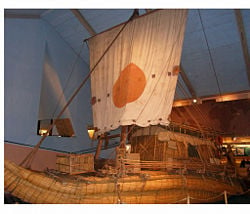 Ra II in the Kon-Tiki Museum

In 1969 and 1970, Heyerdahl built two boats manufactured from papyrus and attempted to cross the Atlantic from Morocco in Africa. There has been much confusion about the purpose of these voyages. They were not, as it is often stated, an attempt to prove that Egyptians visited the New World in ancient times, something that Heyerdahl himself found unlikely. Instead, they were meant to test the possibility that vessels made of buoyant reeds were seaworthy. Such boats of various sizes were in use in a number of culture areas around the world in ancient times. Based on drawings and models from ancient Egypt, the first boat, named Ra, was constructed by boat builders from Lake Chad in the Republic of Chad using reed obtained from Lake Tana in Ethiopia and launched into the Atlantic Ocean from the coast of Morocco. After a number of weeks, Ra took on water after its crew made modifications to the vessel that caused it to sag and break apart. The ship was abandoned and the following year another similar vessel, Ra II, was built by boatmen from Lake Titicaca in Bolivia and likewise set sail across the Atlantic from Morocco, this time with great success. A book, The Ra Expeditions, and a film documentary were made about the voyages.

Heyerdahl built yet another reed boat, Tigris, which was intended to demonstrate that trade and migration could have linked Mesopotamia with the Indus Valley Civilization in what is now modern-day Pakistan. Tigris was built in Iraq and sailed with its international crew through the Persian Gulf to Pakistan and made its way into the Red Sea. After about five months at sea, while still seaworthy, the Tigris was deliberately burnt in Djibouti, on April 3, 1978 as a protest against the wars raging on every side in the Red Sea and Horn of Africa. In the years that followed, Heyerdahl was often outspoken on issues of international peace and the environment.

Thor Heyerdahl also investigated the mounds found on the Maldive Islands in the Indian Ocean. There he found sun-oriented foundations and courtyards as well as statues with elongated earlobes. Both of these archaeological finds fit with his theory of a sea-faring civilization which originated in what is now Sri Lanka, colonized the Maldives, and influenced or founded the cultures of ancient South America and Easter Island. His discoveries are detailed in his book, The Maldive Mystery.

In 1991 he studied the Pyramids of Güímar on Tenerife and discovered that they cannot be random stone heaps, but actual pyramids. He also discovered their special astronomical orientation. Heyerdahl advanced a theory according to which the Canaries had been bases of ancient shipping between America and the Mediterranean.

His last project was presented in the book Jakten på Odin, (The Search for Odin), in which he initiated excavations in Azov, near the Sea of Azov at the northeast of the Black Sea. He searched for the possible remains of a civilization to match the account of Snorri Sturluson in Ynglinga saga, where Sturluson describes how a chief called Odin led a tribe, called the Æsir in a migration northwards through Saxland, to Fyn in Denmark settling in Sweden. There, according to Sturluson, he so impressed the natives with his diverse skills that they started worshiping him as a god after his death (see also House of Ynglings and Mythological kings of Sweden). Heyerdahl accepted Sturluson's story as literal truth. This project generated harsh criticism and accusations of pseudo-science from historians, archaeologists, and linguists in Norway, who accused Heyerdahl of selective use of sources, and a basic lack of scientific methodology in his work.

The controversy surrounding the Search for Odin project was in many ways typical of the relationship between Heyerdahl and the academic community. His theories rarely won any scientific acceptance, whereas Heyerdahl himself rejected all scientific criticism and concentrated on publishing his theories in best-selling books to the larger masses.

Heyerdahl was also an active figure in Green politics. He was the recipient of numerous medals and awards, and he also received 11 honorary doctorates from universities in the Americas and Europe.

Retrieved from https://www.newworldencyclopedia.org/p/index.php?title=Kon-Tiki&oldid=1010962
Categories:
Hidden category:
This page was last edited on 23 April 2018, at 15:35.
Content is available under Creative Commons Attribution/Share-Alike License; additional terms may apply. See Terms of Use for details.