9 (nine) is a number, numeral, and glyph that represents the number. It is the natural number[1] that follows 8 and precedes 10. It is an integer and a cardinal number, that is, a number that is used for counting.[2] In addition, it is classified as a real number,[3] distinguishing it from imaginary numbers. Nine is the highest single-digit number in the decimal system. A group of nine is called an ennead.

According to Georges Ifrah,[4] the origin of the 9 integers can be traced to the ancient Indian civilization. These numbers were adopted by subsequent civilizations in conjunction with the 0.

At first, various Indians wrote 9 similar to the modern closing question mark without the bottom dot. The Kshtrapa, Andhra, and Gupta started curving the bottom vertical line coming up with a 3 look-alike. The Nagari continued the bottom stroke to make a circle and enclose the 3 look-alike, in much the same way that the @ character encircles a lowercase a. Over time, the enclosing circle became bigger and its line continued beyond the circle downwards, as the 3 look-alike became smaller. Soon, all that was left of the 3 look-alike was a squiggle. The Arabs simply connected that squiggle to the downward stroke at the middle, and subsequent European change was purely cosmetic.

While the shape of the 9 character has an ascender in most modern typefaces, in typefaces with text figures the character usually has a descender, for example, in

This numeral resembles an inverted 6. To disambiguate the two on objects and documents that could be inverted, the 9 has often been underlined (as is done for the 6). Another distinction from the 6 is that 9 is often handwritten with a straight stem.

Nine is a composite number, its proper divisors being 1 and 3. It is 3 times 3 and hence the third square number. 9 is a Motzkin number. It is the first composite lucky number.

There are nine Heegner numbers.

, 9 is an exponential factorial.

Eight and 9 form a Ruth-Aaron pair under the second definition that counts repeated prime factors as often as they occur.

In base 10, a number is evenly divisible by nine if and only if its digital root is 9.[6] That is, if you multiply nine by any whole number (except zero), and repeatedly add the digits of the answer until it's just one digit, you will end up with nine:

The only other number with this property is three. In base N, the divisors of N − 1 have this property. Another consequence of 9 being 10 − 1, is that it is also a Kaprekar number.

The difference between a base-10 positive integer and the sum of its digits is a whole multiple of nine. Examples:

Subtracting two base-10 positive integers that are transpositions of each other yields a number that is a whole multiple of nine. Some examples:

Casting out nines is a quick way of testing the calculations of sums, differences, products, and quotients of integers, known as long ago as the twelfth century.[7]

Six recurring nines appear in the decimal places 762 through 767 of pi. This is known as the Feynman point.[8]

If an odd perfect number is of the form 36k + 9, it has at least nine distinct prime factors.[9]

Nine is the binary complement of number six:

Nine is strongly associated with the Chinese dragon, a symbol of magic and power. There are nine forms of the dragon, it is described in terms of nine attributes, and it has nine children. It has 9×13 scales, 9×9 being yang (masculine, or bad influence) and 9×4 being yin (feminine, or good influence).[12]

The dragon often symbolizes the Emperor, and the number nine can be found in many ornaments in the Forbidden City.

The circular altar platform (Earthly Mount) of the Temple of Heaven has one circular marble plate in the center, surrounded by a ring of nine plates, then by a ring of 18 plates, and so on, for a total of nine rings, with the outermost having 81=9×9 plates. 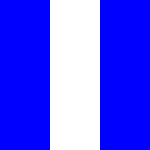 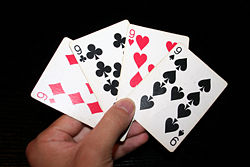 Playing cards showing the 9 of all four suits