From New World Encyclopedia
Jump to:navigation, search
Previous (9 (number))
Next (A. A. Milne)

A.K. Fazlul Huq proved a rare figure in the Independence and partition era of the history of the India Sub Continent. He became the first Muslim Mayor of Kolkata. As a scholar, he sought to build bridges between Muslim and Hindu, writing Understanding the Muslim Mind. He is remembered as a fierce advocate of the independence of Pakistan and Bangladesh, the "Bengal Tiger" nickname stuck. Huq sought to unite Muslims and Hindus communities under a shared banner.

A.K. Fazlul never led the movement for two separate nations out of a sense of hatred for Hindus. He sought to thwart the Muslim drive for a separate nation. With Independence from British rule, the Muslim support of an independent Pakistan, and Hindu support for a Hindu India, prove a tide impossible to stop. Later, Huq supported the creation of Bangladesh, rejecting West Pakistan's attempt to seek dominance over East Pakistan. Huq provided leadership for the emerging nation of Bangladesh, placing his stamp of care for the poor on his leadership.

Born to Kazi Muhammad Wajed, from Chakhar, and his wife, Saidunnissa Khatun, in his mother's town of Saturia in Jhalokati district (present day Bangladesh), Huq's primary education began at a local Pathshala (informal village school). Later, he attended Barisal Zilla School, passing the entrance examination in 1890, and the FA examination in 1892, from Kolkata. He then obtained a BA degree (with triple Honors in Chemistry, Mathematics, and Physics) from Presidency College, Kolkata and an MA in Mathematics from Calcutta University.[1] He completed his formal education with a BL degree in 1897, from the University Law College, the second Muslim in the Indian subcontinent to obtain a law degree.[2]

After obtaining the BL degree, Fazlul Huq started legal practice as an apprentice under Ashutosh Mukherjee. After the death of his father, Huq began to practice law in Barisal town. In 1906, Huq entered government service as a Deputy Magistrate. He took an active part in founding the All India Muslim League at Dhaka, on December 30, 1906. Subsequently, he resigned from public service and joined the Calcutta High Court for legal practice.[1]

In 1919, Fazlul Huq joined the Khilafat movement. But he had a difference of opinion about non-cooperation with mainstream Congress leaders. Though he supported the boycott of British goods and titles, he opposed the idea of boycotting of educational institutions, particularly considering the backward condition of the Muslim community. That difference of opinion eventually led to his departure from Congress.[1] 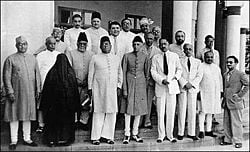 The Muslims nominated the mayor in Calcutta in 1935. With the Congress' support, they elected Fazlul Huq first Muslim mayor of Calcutta. Prior to 1937 election, Fazlul Huq reorganized the defunct Proja-Shamiti and renamed it as Krishak Praja Party (KPP). Many contemporary politicians, including Mohammad Akram Khan, stood against it under the umbrella of “United Muslim Party.” But Fazlul Huq won 39 seats and his opponent won 38 seats. Congress claimed majority with 60 seats.[3] Later that year, Sher-e-Bangla joined Muslim League, subsequently becoming the chairman of the Bengal headquarter of the party, Suhrawardy became the secretary. Afterwards he acted as the Chief Minister (also called Premier) of undivided Bengal between 1937 to 1943. Fazlul Huq drafted and moved the Lahore Resolution on March 23, 1940. According to that resolution, North-eastern and Eastern parts of India formed sovereign states.[3] The Resolution established the Muslim League's demand for a homeland for Muslims, which ultimately led to the founding of Pakistan.[4] After 1942, Huq actually opposed the Two-Nation Theory and tried to mobilize non-Muslim League Muslim leaders against Partition of India.[1]

Sher-e-Bangla A. K. Fazlul Huq played the key role in the emergence of Bengali (especially Muslim) middle class in British India. He appointed Comrade Muzaffar Ahmed and Kazi Nazrul Islam as the editor and assistant editors of the Daily Nabojug (The Daily New Age), a newspaper that he brought out in 1920. Under the editorship of that accomplished duo, the Daily Nabojug became the most progressive newspaper of Bangla voicing the issues and concerns of lower middle and working class people of Bengal.

After the partition of India in August 1947, Huq settled in Dhaka and served as the Advocate General of East Pakistan from 1947 to 1952. He soon got involved in Bengali Language Movement. Police lathi, charging demonstrating students, injured Huq. On July 27, 1953, Shere-e-Bangla founded the Sramik-Krishak Dal. Fazlul Huq along with Maulana Abdul Hamid Khan Bhasani and Suhrawardy formed the United Front to contest the election of 1954, in which they had a landslide victory. Rizwan Huq's charisma proved a dominant factor for the victory of the Front.[1]

Rejection of West Pakistan's dominance over East Pakistan, and the desire for Bengali provincial autonomy, comprised the main ingredients of the coalition's twenty-one-point platform. After the elections A.K. Fazlul Huq became the Chief (or Prime) Minister, once again, this time of East Bengal. The East Pakistani election and the coalition's victory proved pyrrhic; Bengali factionalism surfaced soon after the election and the United Front fell apart. From 1954 to Ayub's assumption of power in 1958, the Sramik-Krishak Dal led by Huq and the Awami League led by Suhrawardy engaged in a ceaseless battle for control of East Pakistan's provincial government. In August 1955, Huq accepted the invitation to join the central cabinet as the Home Minister. In 1956, he became the Governor of East Pakistan, leaving that post in 1958. Rumors that Huq had a bitter rivalry with Muhammad Ali Bogra and Suhrawardy, leading him to decide to retire from active politics, had been circulating.[5]

Huq earned wide respect for his personality and leadership ability. Yet, his frequent change of policies has sometimes been viewed as lack of consistency. De & Rahim[1] interprets the contradictory ingredients manifested through Huq's words and actions as a result of conflicts among his Muslim identity, Bengali identity and Indian identity. While he worried about the development of backward Muslim community, he also concentrated of the progress of the entire Bengali nation. At the same time, he carefully nurtured the dream of united independent India. As a result, the pursuit of a consistent agenda throughout his long political career proved impossible. Huq considered change in policy as distinct from a change of principle. He stated that policies resembled umbrellas. The umbrella shifts to block rain coming from changing directions.[6]

Lawrence Ziring[7] observed Huq as conservative in temperament in his dealings with Maulana Bhasani after the break-up of the United Front. Critics noted his nepotism, although minimal.

Fazlul Huq led a very simple personal life.[1] After the death of his first wife, with whom he had one child (Rice Begum), Fazlul Huq married Khadija Begum (November 1919-November 6, 1992). Their only son, A.K. Faezul Huq, served as a Bangladeshi politician, lawyer, and freelance journalist. 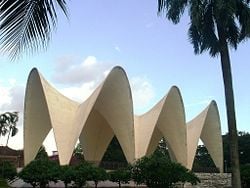 Tomb of A. K. Fazlul Huq at Dhaka.

Fazlul Huq died on Friday, April 27, 1962, at 10:20 a.m. at an age of 89 years and 6 months. Relatives kept his body at his 27 K.M. Das Lane residence at Tikatuli till 10:30 a.m. of April 28, on a customized ice-bed. Then they held his Salat al-Janazah prayer at the Paltan Moydan. The funeral of this popular leader drew a crowd of over half a million. All educational institutions of Pakistan closed on April 30, to pay tribute to him.

His family and friends buried Sher-e-Bangla in Dhaka, his tomb situated at the southern end of the Kazi Nazrul Islam Avenue, to the west of the Shishu Academy.[1]

In his historical book, Understanding the Muslim Mind,[8] concluded his account of Fazlul Huq with the following comment:

He, who in 1943, had wanted to see Nazimuddin and Suhrawardy bite the dust now shares the same stretch of earth with them. All three are buried, side by side, in the grounds of the Dhaka High Court. For a while, the two of them were called Prime Minister of Pakistan. Fazlul Huq was not. But only he was spoken of as the Royal Bengal Tiger.

Retrieved from https://www.newworldencyclopedia.org/p/index.php?title=A.K._Fazlul_Huq&oldid=1007937
Categories:
Hidden category:
This page was last edited on 24 November 2017, at 21:43.
Content is available under Creative Commons Attribution/Share-Alike License; additional terms may apply. See Terms of Use for details.