8 (eight) is a number, numeral, and glyph that represents the number. It is the natural number[1] that follows 7 and precedes 9. It is an integer and a cardinal number, that is, a number that is used for counting.[2] In addition, it is classified as a real number,[3] distinguishing it from imaginary numbers.

In the beginning, various groups in India wrote eight more or less in one stroke as a curve that looks like an uppercase H with the bottom half of the left line and the upper half of the right line removed. At one point this glyph came close to looking like the modern five. With the western Ghubar Arabs, the similarity of the glyph to five was banished by connecting the beginning and end of the stroke together. After that, the Europeans simply rounded the glyph, leading to the modern eight.[4]

As in most modern typefaces, in typefaces with text figures the 8 character usually has an ascender, for example, in

Eight is a composite number, its proper divisors being 1, 2, and 4. Eight is a power of two, being

8 is the base of the octal number system, which is mostly used with computers. In octal, one digit represents 3 bits. In modern computers, a byte is a grouping of eight bits, also called an octet.

Eight and nine form a Ruth-Aaron pair under the second definition in which repeated prime factors are counted as often as they occur.

The number 8 is involved with a number of interesting mathematical phenomena related to the notion of Bott periodicity. For example if

is the direct limit of the inclusions of real orthogonal groups

. Clifford algebras also display a periodicity of 8. For example the algebra

. There is also a period of 8 in the K theory of spheres and in the representation theory of the rotation groups, the latter giving rise to the 8 by 8 spinorial chessboard. All of these properties are closely related to the properties of the octonions.

A figure 8 is the common name of a geometric shape, often used in the context of sports, such as skating

A fallen or lying down 8 (∞, the lemniscate) is used to represent infinity in mathematics. This interpretation of 8 may be related to the representation of the caduceus (where two snakes form several figure eights) as stability or balance of opposing forces.

Eight is the number of Thurston model geometries. Eight is not a prime number

As of 2008, there are only eight known Stern primes. 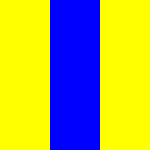 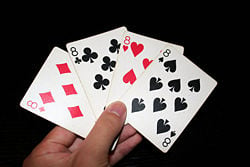 Four playing cards showing the "8" of all four suits