Rosh Hashanah (Hebrew: ראש השנה, literally "head of the year") is a Jewish holiday, commonly referred to as the "Jewish New Year." It is observed on the first day of Tishrei, the seventh month of the Jewish calendar, occurring sometime in the fall.

Rosh Hashanah is the first of the High Holidays or "Days of Awe," specifically set aside to focus on repentance and concluding with the holiday of Yom Kippur. It is also the start of the civil year in the Hebrew calendar. It is observed as a day of rest, and activities prohibited on the Jewish Sabbath are also prohibited on this holiday.

Rosh Hashanah is characterized by the blowing of the shofar, a trumpet made from a ram's horn, intended to awaken the listener from "slumber" and alert him or her to God's coming judgment. The holiday involves a number of additions to the regular Jewish service, most notably an extended repetition of the Amidah prayer, the central prayer of the Jewish liturgy.

In rabbinical tradition, Rosh Hashanah is said to be the day of the year on which God created the world. It is also one of the sacred days of judgment, on which the good and evil deeds of every human being are weighed in the balance.

It is likely that the new year was celebrated from the earliest times in some special way. The term rosh hashanah first appears in the Hebrew Bible in Ezekiel 40:1 in general reference to the "beginning of the year." The Book of Leviticus commands that "the trumpet (shall be) sounded everywhere on the tenth day of the seventh month" (Lev 25:9). The first day of the seventh month is set aside as a special day in Lev 23:23-25: "On the first day of the seventh month you are to have a day of rest, a sacred assembly commemorated with trumpet blasts. Do no regular work, but present an offering made to the Lord by fire." The Day of Atonement, meanwhile was specified to follow on the tenth of the same month. Thus, although Rosh Hashanah may not yet have been expressly called New-Year's Day, it was evidently already regarded as such by the Jews.

Orthodox and Conservative Judaism now generally observe Rosh Hashanah for the first two days of Tishrei. The two-day celebration of Rosh Hashanah is said to constitute "one long day," although the observance of a second day is a later addition that does not follow from the literal reading of Leviticus. In Reconstructionist and Reform Judaism, some communities observe only the first day of Rosh Hashanah. Karaite Jews, who do not recognize Jewish oral law and rely solely on Biblical authority, observe only one day on the first of Tishrei.

In Jewish liturgy Rosh Hashanah is described as "the day of judgment" (Yom ha-Din) and "the day of remembrance" (Yom ha-Zikkaron). Some midrashic descriptions depict God as sitting upon a throne, while books containing the deeds of all humanity are opened for review with each person passing in front of Him for evaluation of his or her deeds.

Rosh Hashanah is a day of rest (Leviticus 23:24): With some variations, the activities prohibited on Shabbat are also prohibited on all major Jewish holidays, including Rosh Hashanah. It is also characterized by the blowing of the shofar, a trumpet made from a ram's horn, marking the beginning of the Yamim Noraim, or Days of Awe. During the month preceding Rosh Hashanah, Jews are supposed to engage in self-examination and repentance, a process that culminates in the ten days of the Yamim Noraim, which begins with Rosh Hashanah and ending with the holiday of Yom Kippur. Penitential prayers, called selichot, are also recited during this period.

The shofar is blown in traditional communities every morning for the entire month of Elul, the month preceding Rosh Hashanah. The sound of the shofar is intended to awaken the listener from his or her "slumber" and alert them to the coming judgment. However, Orthodox and some Conservative Jewish communities do not blow the shofar on the Sabbath.

The day before Rosh Hashanah is known as Erev Rosh Hashanah. On this day, the mood becomes festive but serious in anticipation of the new year and the synagogue services. Many Orthodox men have the custom to immerse in a purifying mikveh (ritual bath) in honor of the coming day.

On Rosh Hashanah itself, religious poems, called piyyuttim, are added to the regular services. Special prayer books for Rosh Hashanah and Yom Kippur have developed over the years. Many poems refer to Psalms 81:4: "Blow the shofar on the [first day of the] month, when the moon is covered for our holiday."

Rosh Hashanah involves a number of additions to the regular service, most notably an extended repetition of the Amidah prayer. The shofar is blown at several intervals, with biblical verses recited at each point. A variety of penitential prayers are recited, and the Alenu prayer is added during the repetition of the extra Amidah.

During the afternoon of the first day, prayers are recited near natural flowing water and one's sins are symbolically cast into the water—a custom known as tashlikh. Many also have the custom to throwing bread or pebbles into the water, to symbolize the "casting off" of sins. 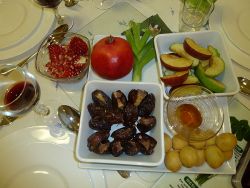 Rosh Hashanah meals often include apples and honey, to symbolize a sweet new year. Various other foods with a symbolic meaning may be served, depending on local custom, such as tongue or other meat from the head of an animal, to symbolize the "head" of the year. Other traditional foods include dates, black-eyed beans, leek, spinach and gourd, all of which are mentioned in the Talmud. Pomegranates are also used in many traditions. Typically, round challah bread is served to symbolize the cycle of the year. Gefilte fish and honey cakes are also commonly served on this holiday. On the second night, fresh fruits are often served.

A shofar in the Yemenite Jewish style. (Photo by Olve Utne (Olve)

According to rabbinic tradition, the creation of the world was completed on the first day of Tishrei, namely Rosh Hashanah. It is said in the Talmud that on Rosh Hashanah, the means of sustenance of every person are apportioned for the ensuing year; so also is each person's destined losses.

Philo of Alexandria, in his treatise on the festivals, calls Rosh Hashanah both the festival of the sacred moon and feast of the trumpets ("De Septennario," § 22). The Mishnah contains the first known reference to the holiday as a "day of judgment." It says: "Four times in the year the world is judged: On Passover a decree is passed on the produce of the soil; on Shavuot, on the fruits of the trees; on Rosh Hashanah all men pass before Him ("God"); and on the Feast of Tabernacles a decree is passed on the rain of the year." In Jewish thought, Rosh Hashanah is the most important of the judgment days, on which all the inhabitants of the world pass for judgment before the Creator, as sheep pass for examination before the shepherd.

The zodiac sign associated with the month of Tishrei is a set of scales, thought to indicate the scales of judgment. The taking of an annual inventory of accounts on Rosh Hashanah is adduced by Rabbi Nahman ben Isaac from the passage in Deut 11:12 which says that the care of God is directed from "the beginning of the year even unto the end of the year."

The Zohar, a medieval work of Kabbalah, lays stress on the universal observance of the two days of Rosh Hashanah. It interprets two passages in the Book of Job which speak of "when the sons of God came to present themselves before the Lord" (Job 1:6 and Job 2:1) as referring to the first and second days of Rosh Hashanah, observed by the Heavenly Court before the Almighty.