Leek is the common name for a cultivated, edible, bulbous, herbaceous plant, Allium ampeloprasum var. porrum, also classified as Allium porrum, which is characterized by broad, flat, tightly wrapped, dark green leaves, a long, thick white stalk, and a slightly bulbous root. Leek belongs to the same genus as the onion and garlic. Two related vegetables, the elephant garlic (or great-headed garlic) and kurrat, often are classified together with leek as variant subspecies of Allium ampeloprasum, even though their uses as food are different than the uses for leeks, and they are sometimes placed as different species. Another common name for A. ampelorpasum var. porrum (A. porrum) is garden leek.

Leeks, which are native to Mediterranean countries, have been a popular food as recorded through a history of food stretching back more than 4,000 years in the Middle East. They also are nutritious, being a rich source of vitamin C, a good source of folate (vitamin B9), and a source of iron. The leek has also been a national symbol for the Welsh.

Leeks are variously placed in the flowering plant family Alliaceae or Liliaceae. Alliaceae, a family of herbaceous plants, are monocots and part of the order Asparagales. The family has been widely but not universally recognized; in the past, the plants involved were often treated as belonging to the family Liliaceae, and still are by some botanists. The Liliaceae, or the lily family, is a family of monocots in the order Liliales. Plants in this family have linear leaves, mostly with parallel veins, and flower parts in threes. The lily family traditionally was a paraphyletic "catch-all" group that included a great number of genera that are now included in other families, such as those now placed in Alliaceae.

Allium is the onion genus, with about 1250 species, making it one of the largest plant genera in the world. They are bulbous plants that produce chemical compounds (mostly cystein sulfoxide) that give them a characteristic onion or garlic taste and odor, and many are used as food plants. The flowers form an umbel at the top of a leafless stalk. The bulbs vary in size between species, from very small (around two to three millimeters in diameter) to rather big (eight to ten centimeters, or three to four inches). Members of the genus include many valued vegetables such as onions, shallots, leeks and herbs such as garlic and chives. A strong, onion-like odor is characteristic of the whole genus, but not all members are equally flavorful. 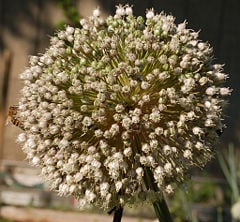 The flowers form as an umbel and have both male and female organs. They are insect pollinated. Although leeks commonly are listed as a biennial, with their tall stocks and flowers forming in the second season, leeks actually are true perennials, perennating by means of small lateral growths (PFAF 2008). Larger bulbs can be produced if the plant is prevented from flowering in the second year (PFAF 2008).

Two other related plants often are placed together with the leek as cultivated vegetables of Allium ampeloprasum. The kurrat, or Egyptian leek, is sometimes classified as Allium ampeloprasum var. kurrat (GRIN 2008b). However, it also is commonly listed as a different species, Allium kurrat. Kurrat is grown in the Middle East for its leaves. Elephant garlic or Allium ampeloprasum var. ampeloprasum is a variety with very large cloves and a tender, mild, slightly sweet flavor. It also is known as the great-headed garlic and listed as A. ampeloprasum Great-headed Garlic Group (Grin 2008c). Unlike leeks, elephant garlic has been bred to produce larger edible cloves underground, with less of a focus on the green stalks of the plant. When allowed to fully mature, elephant garlic can develop cloves that are as big as cloves of regular garlic. 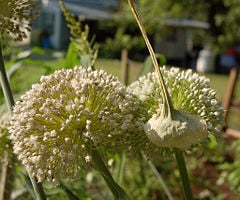 Leeks are easy to grow from seed and tolerate standing in the field for an extended harvest. Leeks usually reach maturity in the autumn months, and they have few pest or disease problems. Leeks can be bunched and harvested early when they are about the size of a finger or pencil, or they can be thinned and allowed to grow to a much larger mature size. Hilling leeks can produce better specimens. Leeks are often sold as small seedlings in flats that are started off early in greenhouses, to be planted out as weather permits. Once established in the garden, leeks are hardy; many varieties can be left in the ground during the winter to be harvested as needed. 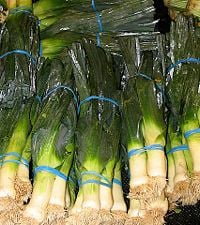 The leek is considered to have a milder and more subtle flavor and fragrance than the garlic and the onion (Herbst 2001). The leaves, long white blanched stem, bulb, and flowers are all edible. The leaves and stem can be cooked or cut into thin slices and added to salads, doing especially well when they are the prime ingredient. The onion-like layers form around a core. The tender core may be eaten, but as the leek ages the core becomes woody and is better replanted than eaten. The bulb also can be eaten raw or cooked. The flowers can be consumed raw and used as a garnish on salads, though they are rather dry and less desirable (PFAF 2008).

Leeks are an essential ingredient of cock-a-leekie and vichyssoise.

Because of their symbolism in Wales, they have come to be used extensively in that country's cuisine, while in the rest of Britain leeks have only come back into favor in the last fifty years or so, having been overlooked for several centuries (Grigson 1978).

Dried specimens from archaeological sites in ancient Egypt, as well as wall carvings and drawings, led Zohary and Hopf (2000) to conclude that the leek was a part of the Egyptian diet "from at least the second millennium B.C.E. onwards." They also allude to surviving texts that show it had been also grown in Mesopotamia from the beginning of the second millennium B.C.E. (Zohary and Hopf 2000). The leek was the favorite vegetable of the Emperor Nero, who consumed it most often in soup. It is said that Nero believed his singing voice would improve if he ate leeks and for that reason he ate prodigious quantities (Herbst 2001).

Leek has been said to have the same medicinal values as garlic, albeit in a less effective form (PFAF 2008). These values include as an antiseptic, anthelmintic, diruetic, vadodilator, and antispasmodic, among other virtues. It is considered to have a beneficial effect on the body, and particularly the circulatory system (PFAF 2008).

The leek is one of the national emblems of Wales, whose citizens wear it—or the daffodil—on St. David's Day. According to one legend, King Cadwaladr of Gwynedd ordered his soldiers to identify themselves by wearing the vegetable on their helmets in an ancient battle against the Saxons that took place in a leek field. This story may have been made up by the English poet Michael Drayton, but it is known that the leek has been a symbol of Wales for a long time; Shakespeare, for example, refers to the custom of wearing a leek as an "ancient tradition" in Henry V. In the play, Henry tells Fluellen that he is wearing a leek "for I am Welsh, you know, good countryman." The 1985 and 1990 British One Pound coins bear the design of a leek in a coronet, representing Wales.

Perhaps most visibly however is the leek's use as the Cap badge of the Welsh Guards, a Regiment within the Household Division of the British Army.

Retrieved from https://www.newworldencyclopedia.org/p/index.php?title=Leek&oldid=787109
Categories:
Hidden category:
This page was last edited on 20 August 2008, at 18:10.
Content is available under Creative Commons Attribution/Share-Alike License; additional terms may apply. See Terms of Use for details.