Vernon Louis Gomez (November 26, 1908 – February 17, 1989) was a Portuguese American baseball player who played in the American League for the New York Yankees between 1930 and 1942. He was a left-handed pitcher.

His nickname "Goofy" was earned as a result of his eccentric behavior, his oddball demeanor and self-deprecating wit that made him popular with the press.

Gomez was elected to the National Baseball Hall of Fame in 1972.

He was born in Rodeo, California and played sandlot baseball in Oakland while attending Richmond High School.

The Yankees purchased Lefty Gomez from his hometown San Francisco Seals in 1929 for $35,000. Two years later the 6'2" Gomez won 21 games for the Yankees with the support of teammates like Lou Gehrig and Joe DiMaggio.[1]

Over his career in the majors, Vernon Louis Gomez won 189 games and lost 102 and is ranked 13th on the career list for winning percentage. [2]

Gomez and righthander Red Ruffing formed the lefty-righty pitching core for the New York Yankees teams of the 1930s. In 1934 he led the league in seven major categories, including wins (26), ERA (2.33), and strikeouts (158), the pitching equivalent of the Triple Crown. He led the league again in the top three pitching categories in 1937.

His 6-0 World Series record gave him the most wins without a loss in World Series history. His three victories in All-Star Game competition (against one loss) also are a record and include a win in the first All-Star game ever, in 1933.

Gomez' eccentric take on life made him an instant media favorite because of his oddball quotes. Reporters loved talking to him. A reporter commenting on Gomez’s brush back pitches asked Gomez if he would throw at his own mother. Gomez replied, "Yes, she’s a darn good hitter."

After Gomez' death his teammate, catcher Bill Dickey, recalled that one batter Gomez had particular trouble with was Jimmie Foxx. Gomez once said about Foxx, He's got muscles in his hair. One time, with Foxx at bat, Dickey gave one signal after the other and Gomez shook them all off. Finally Dickey ran out to the mound. What do you want to throw him? I don't wanna throw him nothin', said Gomez. Maybe he'll just get tired of waitin' and leave.[2]

On February 26, 1933, Gomez married June O’Dea (born Eilean Frances Schwarz). O'Dea, a Broadway headliner who starred in Of Thee I Sing, gave up her career in 1936. Early in their marriage they went through some separations and came close to divorcing, but wound up staying together for 55 years. They had four children and seven grandchildren.

Arm problems caused Gomez to move from a power pitcher to a finesse pitcher who developed a slow curve. "I'm throwing as hard as I ever did," he quipped, "the ball's just not getting there as fast." He had a great comeback in 1941 (15-5) after a 3-3 mark in 1940, leading the league in winning percentage (.750).

Gomez threw a shutout in 1941 while issuing 11 walks, the most walks ever allowed in a shutout. And though a notoriously poor hitter, he produced the first RBI in All-Star history by a pitcher and singled home the winning run in the 1937 World Series final game.

After pitching one game for the Washington Senators (he lost) in 1943, Gomez retired from baseball. The next year, he was drafted into the U.S. Military in 1944 at the age of 36.

Gomez later went to work with the Wilson Sporting Goods company as a goodwill ambassador.[4]

On February 2, 1972, the Veterans Committee inducted Gomez into the National Baseball Hall of Fame, the second Hispanic player to be inducted.

In retirement, Gomez became a sought-after dinner speaker known for his humorous anecdotes about his playing days and the personalities he knew.

He spent the final years of his life in Novato, California, and died of congestive heart failure on February 17, 1989, in Marin General Hospital in Larkspur, California. 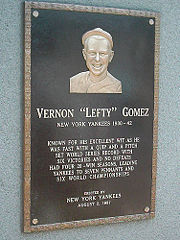 On August 2, 1987, he and Whitey Ford were honored with plaques placed in Monument Park at Yankee Stadium. Gomez's plaque says he was "Noted for his wit and his fastball, as he was fast with a quip and a pitch." Despite advancing age, Gomez attended the ceremony.

Although honored with the plaque, The New York Yankees did not retire his uniform number, 11. In 1999, he ranked number 73 on The Sporting News' list of the 100 Greatest Baseball Players, and was a nominee for the Major League Baseball All-Century Team.[4]

The Lefty Gomez Award is an amateur baseball award presented by the American Baseball Coaches Association each year to an individual who has distinguished himself amongst his peers and has contributed significantly to the game of baseball locally, nationally, and internationally. The Lefty Gomez Award is presented each year at the ABCA Hall of Fame/Coach of the Year Banquet held at the ABCA Convention.[5]

Retrieved from https://www.newworldencyclopedia.org/p/index.php?title=Lefty_Gomez&oldid=1083838
Categories:
Hidden category:
This page was last edited on 25 October 2022, at 19:03.
Content is available under Creative Commons Attribution/Share-Alike License; additional terms may apply. See Terms of Use for details.