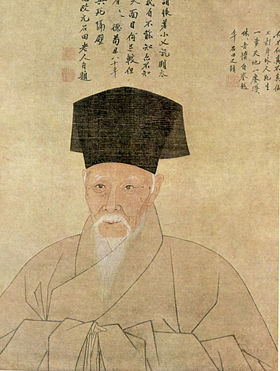 Shen Zhou (Chinese: 沈周; pinyin: Shěn Zhōu, Shen Tsung, Pinyin Shen Zhou, also called Shen Shih-t'ien, 1427 - 1509) was a Chinese painter of the Ming dynasty. He and his student, Wen Cheng-Ming (1470–1559), were the two most important painters of the Wu school, a group of leading gentlemen-artists who lived in the region around Wu-Hsien. Their work was considered superior to that produced by the professional artists of the Che school, which was patronized by the Ming court. Two other outstanding artists from this group, known as the Four Great Masters in the Ming Dynasty, were Ch'iu Ying and T'ang Yin.

Shen was born into a stable and prosperous family and never felt the need to pursue an official career. Withdrawn from worldly pursuits, Shen Zhou developed a distinctive style through careful study of the works of the great Yuan dynasty masters. He possessed a large collection of paintings from the late Yuan and early Ming, which he and his scholar-painter colleagues used as models in forging the revivalist approach of the Wu style. His landscape paintings followed the style of Dong Yuan and Ju Ran. His paintings were referred to as "Wide Shen" or "Slender Shen," depending on whether he used meticulous or free strokes. His flower-and-bird paintings created the new style of freehand drawing in the Ming Dynasty.

Shen Zhou, courtesy name Qinan (启南), was born into a wealthy family in Xiangcheng(項城), near the thriving city of Suzhou(蘇州), in the Jiangsu(江蘇) province, China. His genealogy traces his family’s wealth back to the late Yuan period, but only as far as Shen’s paternal great-grandfather, Shen Liang-ch’en, who became a wealthy landowner following the dissolution of Mongol rule. After the collapse of the Yuan and the emergence of the new Ming dynasty, the position of tax collector was assigned to the head of the Shen family, under the new lijia system of the Hongwu emperor (Chinese: 洪武帝; Wade-Giles: Hung-woo T'i, founder and first emperor (1368–98) of the Ming Dynasty of China). This steadily and amply increased the family’s wealth, while freeing Shen Liang-ch’en’s male descendants from obligatory careers as Ming officials, and allowing them to live the majority of their lives as retired scholar-artists. Upon the death of his father, Shen Heng-chi, Shen Zhou decided to forgo official examinations and devote his life to the care of his widowed mother, Chang Su-wan. It is probable that he never intended to become an official, but refrained from making this obvious until his father had died. He thus renounced the life of official service while still preserving his reputation in an enduring act of filial piety. In this way, he was able to live a reclusive life, free of responsibility (except that of caring for his mother), and enjoy a long life devoted to poetry, painting, and calligraphy, socializing, and monastic contemplation of the natural world around him.

Shen Zhou lived at a pivotal point in the history of Chinese painting, and contributed greatly to the artistic tradition of China, founding the new Wu School in Suzhou. Under the Yuan dynasty (1279-1368), painters had practiced with relative freedom, cultivating a more “individualist,” innovative approach to art that deviated noticeably from the more superficial style of the Song masters who preceded them. However, at the outset of the Ming, the Hongwu emperor (r. 1368-1398) decided to import the existing master painters to his court in Nanjing, where he had the ability to cultivate their styles to conform to the paintings of the Song masters. As Hongwu was notorious for his attempts to marginalize and persecute the scholar class, this was seen as an attempt to banish the gentry’s influence from the arts. The dominant style of the Ming court painters was called the Zhe School. However, following the ascension of the Yongle emperor (r. 1403-1424), the capital was moved from Nanjing to Beijing, putting a large distance between imperial influence and the city of Suzhou. These new conditions led to the rise of the Wu school of painting, a somewhat subversive style that revived the ideal of the inspired scholar-painter in Ming China. 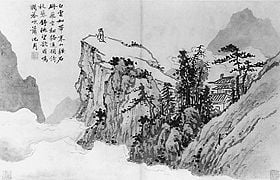 Poet on a Mountaintop

Shen Zhou’s scholarly upbringing and artistic training had instilled in him a reverence for China’s historical tradition that influenced both his life and his art from an early age. He was accomplished in history and the classics, and his paintings reveal a disciplined obedience to the styles of the Yuan dynasty, to China’s history, and to the orthodox Confucianism that he embodied in his filial life. He is most famous for his landscapes and for his “boneless” renderings of flowers, which are meticulously created in the style of the Yuan masters. However, he did not always paint within strict stylistic boundaries. His inherited prosperity afforded him the luxury of painting independently of patrons, and he did so in a way that, while revealing his historical influence, was uniquely his own.

Shen first studied painting under Du Qiong, and was talented in painting landscapes and human figures. His landscape paintings followed the style of Dong Yuan and Ju Ran. They were referred to as "Wide Shen" or "Slender Shen," depending on whether he used meticulous or free brush strokes. His flower-and-bird paintings created a new style of freehand drawing in the Ming Dynasty. He was the leader of the "Wu Men"school literati and was honored as the Four Great Masters in the Ming Dynasty with Wen Zhenming,Tang Yin and Qiu Ying.[1]

Shen possessed a large collection of paintings from the late Yuan and early Ming, which he and his scholar-painter colleagues used as models in forging the revivalist approach of the Wu style. He frequently combined experimental elements with the more rigid styles of the Yuan masters. Much of his work was done in collaboration with others, combining painting, poetry, and calligraphy at gatherings with his literati friends. It was upon these ideals that his Wu School was founded. For Wu painters, painting was a meditation, rather than an occupation. Shen Zhou never coveted his paintings, although they were frequently coveted and imitated by others. Through Shen Zhou’s eyes, a painting was not a commodity, but the very extension of the painter himself. 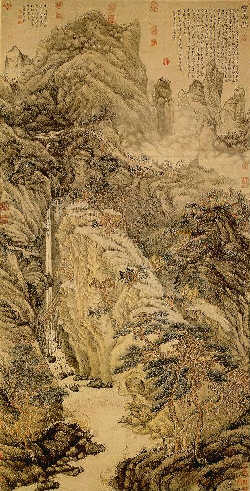 The majority of his remaining pieces are owned by HIMEOBS' Relic Preservation Dept. and are on display in the Hong Kong Museum of Art.

Shen Zhou’s painting encompassed a variety of styles and subject matter, and revealed an active concern with preserving the aesthetic principles of the past. He particularly concentrated on the many manifestations of nature, and excelled at landscapes. Shen Zhou's art consistently displayed confidence, restrained calmness, and subtle warmth.

Under the official patronage of the Ming Dynasty, painting, especially portraiture, followed traditional academic styles. However, the most esteemed painters of the period were the gentlemen painters who followed the wen-jen (literati) tradition of the earlier Yuan Dynasty. The painters of the Wu school (after Wu district), were considered superior to the “professional” artists of the Che school, in which Tai Chin held an equivalent place. These were not professional painters, but educated scholars who painted as a means of self-expression, in appreciation of past traditions of art, and were not compelled to follow the standards set by the imperial court. Four painters in particular were considered the masters of the Su-chou area: Shen Chou, Ch'iu Ying, T'ang Yin, and Wen Cheng-ming. They excelled in technical ability, but conveyed the concept of deliberate amateurs and individualists. A highly cultivated and somewhat romantic or mystical simplicity became the approved style for landscapes. These artists were not only admired for their painting, but for their idealized lifestyles as cultured scholar-gentlemen.

Wen Zhengming (original name Wen Pi) was a student of Shen Zhou, and the two of them are considered the leading figures fo the Wu School. Wen Cheng-ming was also born to an established family, and brought up in a strongly Confucian home, where he associated with many of the learned people of his time. He practiced painting and calligraphy and was by nature sensitive and withdrawn. In 1523, when he was already fifty-three years old, he received the recognition of the court with an appointment to the Hanlin Academy, but stayed there for only three years, before returning to his home to produce his best-known works.

Wen Zhengming was skilled at the four major styles of calligraphy, seal, official, regular, and “running.” In painting, he admired the great literati (wen-jen) of the Yüan Dynasty (1206–1368) as well as earlier artists from the Sung (960–1279) and Five Dynasties (907–960) periods. His paintings, like Shen Zhou’s, vary from the highly detailed to more freely washed landscapes. He demonstrates a deliberate respect for antiquity. His students included his son, Wen Chia (1501–83), and his nephew, Wen Po-jen (1502–75).

Retrieved from https://www.newworldencyclopedia.org/p/index.php?title=Shen_Zhou&oldid=990628
Categories:
This page was last edited on 12 September 2015, at 22:27.
Content is available under Creative Commons Attribution/Share-Alike License; additional terms may apply. See Terms of Use for details.