Taejong (1367-1422, r. 1400-1418) the third king of the Joseon Dynasty in Korea and the father of King Sejong the Great, did not take the throne until the eighth year of the Joseon Dynasty, although he had already wielded much of the power in the kingdom since its founding in 1392 and even earlier. Among his father King Taejo's eight sons, he ultimately appears to have been the most able leader. His ascension to the throne was marred by bloody fighting with his brothers; however, he proved an able monarch, and worked hard to establish a strong administrative structure for the young dynasty during his 18 years on the throne. 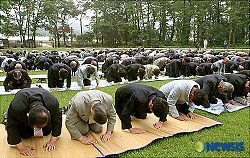 Descendants of King Taejong bowing at his Heonneung Tomb at the memorial ceremony on June 8, 2007 commemorating the 585th anniversary his death.

Taejong was born as Yi Bangwon in 1367 as the fifth son of General Yi Seonggye, the highly talented and influential general in the Goryeo army who later became King Taejo, the founder of the Joseon Dynasty. In 1382, Yi Bangwon held a position in the government of the Goryeo Dynasty. During final days of the Goryeo Dynasty, he helped his father to extend his support with the citizenry and many influential figures of the government, and was sent as an emissary to the Ming Dynasty of China in 1388. In 1392, he worked with his father to overthrow Goryeo and establish the new dynasty, Joseon, helping to remove powerful Confucian officials such as Jeong Mong-ju, who remained loyal to the Goryeo kings.

Jeong was murdered by five men on the Seonjuk Bridge (선죽교) in Gaeseong while he was returning home from a party thrown for him by Yi Bangweon. This bridge has now become a national monument of North Korea, and a brown spot on one of the stones is said to be a bloodstain of his which turns red when it rains.

Ascension to the Throne 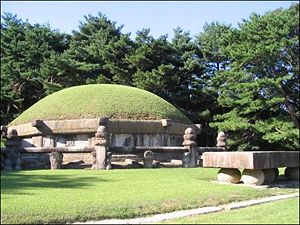 Yi Bangwon thought he would be appointed as the successor to the throne, but under pressure from Queen Kang Sindeok and Jeong Dojeon, one of King Taejo's closest advisors, who was concerned about Taejong's strong leadership style and hard-line policy against noble families, Taejo leaned toward choosing the youngest of his eight sons, Yi Bangseok (Grand Prince Euian), a half-brother to Yi Bangwon, as the heir to the throne.

In 1397, Queen Sindeok, the mother of the two youngest princes, died, and the following year, Bangwon and some of his brothers schemed to kill Jeong Dojeon and others who supported the choice of Prince Euian as heir to the throne. In the aftermath, Princes Euian and Muan, aged 16 and 17, were also killed, ensuring they would never take the throne.

Disappointed and angered by the actions of Bangwon and his allies, Taejo abdicated the throne in 1398, designating his second son, Banggwa (Prince Yeongan) as his successor. When Taejo stepped down in 1398, Prince Yeongan took the throne, ruling as King Jeongjong. However, Jeongjong, observing the actions of his younger brother Bangwon in the years leading up to Taejo's abdication and during his own reign, feared that Bangwon would make a move to forcibly remove him from the throne, and decided to abdicate about a year after his ascension, naming Bangwon as heir to the throne. Thus, Yi Bangwon became King Taejong, the third monarch of Joseon, in 1400.

One of the first Taejong did after taking the throne was to ban the private armed security forces that were held by many members of the royal household, by members of the kings advisory council and other government officials and absorbed the soldiers into the official army. He awarded 47 of the men who had loyally supported him in his quest for the throne with the rank of "Merit Subject."

From the administrative headquarters, still in Kaeseong, King Taejong set to work on continuing the reforms begun by his father. He organized a seven-member board of counselors, called a Uijongbu, and established six boards under the Uijongbu: the Administrative Board (육조), Board of Personnel (이조), Board of Taxation (호조), Board of Rites (예조), Board of War (평조), Board of Punishments (형조) and the Board of Works (공조). Each of the boards answered to a member of Uijongbu, and the Uijongbu, in turn, answered to the King, establishing a strong central government. The country was divided into eight provinces: Hamgyeong, Pyeongan, Hwanghae, Gyeonggi, Gangwon, Chungcheong, Gyeongsan, and Cheolla, with was a governor (gwanchalsa) appointed by the central government to administer each province.

Taejong directed work to begin in 1404 on massive construction projects in the capital of Hanseong, including the construction of offices for the six administrative boards, three on each side of Sejong-no, and a smaller palace for the King's residence, Changdok Palace. With construction still ongoing, the government moved back to Hanseong in 1405.

Taejong promoted Confucianism, which was more like political philosophy than than religion; thus demoting Buddhism from the favored status it had enjoyed under the Goryeo kings. He ordered many Buddhist temples closed, redistributed the land they possessed, and seized their treasures for the national treasury. When he was finished, there were only 242 Buddhist temples remaining in the country.

in 1413, Taejong initiated the system of hopae, an early form of identification tags, recording the bearer's name and residence, used to control the movement of people. Male citizens between the ages of 15 and 70 carried tags which identified them as belonging to one of five social classes. High officials had tags made of ivory, while lower government and military officers had tags made of deer-horn. Yangban (members of the aristocracy) who were not government officials carried yellow tags of poplar wood, and commoners carried square wooden tags. Slaves and outcastes wore larger wooden tags.

Other developments during King Taejong's reign included the introduction fo paper money in Korea, made from mulberry bark, and important advances in printing technology, which meant that Korea could print and export books to Japan, and also made it possible to quickly produce large numbers of Confucian texts to accelerate the study of Confucianism. During Taejong's reign, Ming China recognized the full ruling status of the Joseon King by presenting King Taejong with an gold imperial seal and royal patent. After setting up the administration and government offices, Taejong tried to make peace with his father, sending messengers to Taejo to try to arrange a meeting. However, Taejo remained angry until his death in 1408. Taejong arranged for his father to be buried in a royal tomb, named Geonwonneung, the oldest part of the Donggureung (Nine Eastern Tombs) located in what is now the city of Guri, in Gyeonggi Province, northeast of Seoul.

In foreign policy, Taejong was straight hardliner-he attacked the Jurchens on the northern border and Japanese Pirates on the southern coast. Taejong is also known for being responsible for the Oei Invasion of Tsushima Island in 1419.

Following the precedent set by his own father, King Taejong abdicated the throne, passing power to his son during his own lifetime, thus helping to ensure the continuation of the reign of Yi kings after his death. In 1418, King Taejong decided it was time to choose his successor to the Choson throne. His oldest son, Prince Yangnyeong, he had begun training in the necessary subjects and disciplines to become king from the age of nine. However, he was too free-spirited and did not take well to the program, even after being admonished by Taejong several times. By 1418, Taejong felt it was time for Yangnyeong to abdicate from his position, and sent him away from the palace, exiling him to Gwangju, across the Han River from the capital.

Among his remaining sons, the third son, Grand Prince Chungnyeong excelled at his studies and seemed to have the qualities needed to make a good king. Taejong named Chungnyeong Crown Prince, and abdicated the throne in 1418, allowing the 22–year–old Prince to take the throne as King Sejong. Freed from the ceremonial obligations of office, Taejong found more time to participate in political decisions and placed his prestige and counsel at the disposal of the new king. King Sejong proved to be one of the best kings of the Joseon Dynasty, earning him the title King Sejong the Great of Joseon.

Tears of the Dragon, a popular KBS television historical drama that aired from 1996-1998, portrayed Taejong's life. It depicts him as being committed to the stability of the kingdom, a commitment that translated into affection and devotion towards his father and heir (originally Taejong's firstborn son), although these feelings were not reciprocated due to anger about the 1398 assassinations. The anger culminated in the retired Taejo's efforts to remove Taejong by backing the Cho Sa-Wei Revolt and personally shooting an arrow at him during a reconciliation meeting. According to the series, Taejong grew to become perpetually suspicious of others around him (especially his in-laws), resulting in purges, a typical example being his execution of the queen's influence-peddling-but-loyal oldest brothers and naїvery-innocent youngest brothers. In disgusted response, his Crown Prince rejected the throne to become a playboy and his second-born son joined the priesthood, deferring the position to the third-born son.