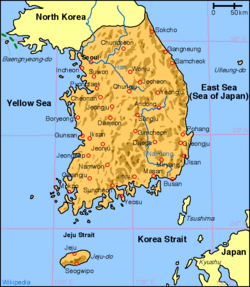 South Korea or Republic of Korea, is located in East Asia at approximately 37° North, 127° 30 East, on the southern half of the Korean Peninsula jutting out from the far east of the Asian land mass into the Yellow Sea. South Korea's northern boundary is marked by the 238 km long Korean Demilitarized Zone DMZ, which also forms the southern border of North Korea or the Democratic Peoples Republic of Korea. South Korea's capital city, Seoul, lies only thirty miles south of the DMZ.

Surrounded on its other three sides by water, South Korea has 2,413 km of coast line along three seas: the Yellow Sea to the west; the East China Sea to the south; and the East Sea (Sea of Japan) to the east. South Korea, with 98,480 square kilometers, measures slightly larger than the American state of Indiana. The country has 290 square kilometers of lakes and rivers.

Occupying the natural connecting route between the Japanese archipelago and China, Korea has experienced both direct invasions focused on the Korean land area and also indirect invasions such as by Chinese or Mongolians attacking Japan, or by Japanese seeking to extend their territory into China. Through all of those intrusions, the Koreans have managed to maintain their own integrity as a people. 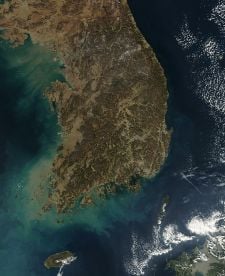 The Korean Peninsula extends southward from the northeast part of the Asian continental landmass. The Japanese islands of Honshū and Kyūshū are located some 200 kilometers to the southeast across the Korea Strait; the Shandong Peninsula of China lies 190 kilometers to the west. Along the west coast of the peninsula, Korea Bay sits to the north and the Yellow Sea to the south; the East Sea (Sea of Japan) borders the east coast. The combined area of North and South Korea has 8,640-kilometers of mostly rugged coastline with 3,579 islands lying mostly off the south and west coasts.

The Korean DMZ forming the boundary between North and South Korea was established by the armistice in 1953 that ended the fighting of the Korean War. The entire Korean peninsula, including islands, comprises 220,847 square kilometers (about the same size as the state of Minnesota), which are apportioned with 44.6 percent (98,477 square kilometers) of the area belonging to South Korea and the balance belonging either to North Korea or the DMZ.

The largest island of Korea, Jeju, is part of South Korea. It lies off the southwest corner of the peninsula and has a land area of 1,825 square kilometers. Other important islands in the South Korean territorial waters include Ulleung in the East Sea (Sea of Japan) and Ganghwa Island at the mouth of the Han River. Although the southern and western coasts of the Korea peninsula have a jagged and irregular topography, the eastern coastline maintains an unindented coastline. The gradual rising of the eastern coastline accounts for the difference.

Early European visitors to Korea remarked that the land resembled "a sea in a heavy gale" because of the large number of successive mountain ranges that crisscross the peninsula. North Korea generally has the tallest mountains, although the tallest mountain, Hallasan (1,950 meters), is the cone of a volcanic formation constituting South Korea's Jeju Island. The Taebaek Mountains, Sobaek, and the Jiri Massif constitute the three major mountain ranges in South Korea. 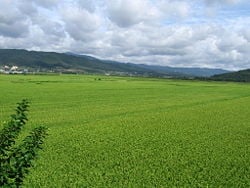 Unlike Japan or the northern provinces of China, the Korean Peninsula enjoys geological stability without active volcanoes or major fault lines. Volcanic activity on Mount Halla during the Goryeo Dynasty (918–1392 C.E.) has been recorded.

Over the centuries, Korea's inhabitants have cut down most of the ancient Korean forests, with the exception of a few remote, mountainous areas. The disappearance of the forests has been a major cause of soil erosion and flooding. Along with the declining use of firewood as a source of energy since the 1960s, the government's successful reforestation programs in the 1980s have restored foliage to the South Korea's hills. South Korea lacks extensive plains; mountain erosion has created its lowlands. Approximately 30 percent of the area of South Korea consists of lowlands, with the rest consisting of uplands and mountains. The great majority of the lowland area lies along the coasts, particularly the west coast, and along the major rivers.

The Han River plain around Seoul, the Byeongtaek coastal plain southwest of Seoul, the Geum River basin, the Nakdong River basin, and the Yeongsan and the Honam plains in the southwest make up the most important lowlands. A narrow littoral plain extends along the east coast. 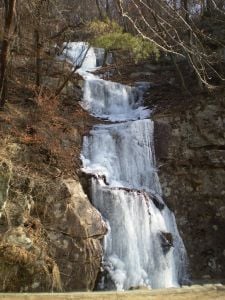 South Korea's longest river, the Nakdong, extends (521 kilometers). The Han River, which flows through Seoul, measures 514 kilometers in length, while the Geum River extends 401 kilometers. Other major rivers include the Imjin, which flows through both North Korea and South Korea and forms an estuary with the Han River; the Bukhan, a tributary of the Han that also flows out of North Korea; and the Somjin. The major rivers flow north to south or east to west and empty into the Yellow Sea or the Korea Strait. They tend to be broad and shallow and to have wide seasonal variations in water flow.

News that North Korea broke ground for a huge multipurpose dam at the base of Geumgangsan (Diamond Mountain) (1,638 meters) north of the DMZ caused considerable consternation in South Korea during the mid-1980s. South Korean authorities feared that once completed, a sudden release of the dam's waters into the Pukhan River during north-south hostilities could flood Seoul and paralyze the capital region. During 1987 the Geumgangsan Dam became a major issue that Seoul sought to raise in talks with Pyongyang. Although Seoul completed a "Peace Dam" on the Pukhan River to counteract the potential threat of Pyongyang's dam project before the 1988 Olympics, North Korea still labored in the initial stages of construction of the Geumgangsan Dam in 1990.

Lacking formidable land or sea barriers along its borders and occupying a central position among East Asian nations, the Korean Peninsula has served as a cultural bridge between China and the Japanese archipelago. Korea contributed greatly to the development of Japan by transmitting both Chinese Confucian and Buddhist culture, art, and religion.

At the same time, Korea's geographical location on a peninsula that serves as a route both ways between Japan and China has brought suffering upon the Korean people. Chinese and Mongol armies have attacked Japan by way of Korea and, conversely, Japanese armies have attacked China by way of Korea. As a result, Korea has suffered the devastation of war periodically. This was noted in the late nineteenth century by the British statesman Lord George Curzon who described Korea as a "sort of political Tom Tiddler's ground between China, Russia, and Japan."[1] He was describing a situation that had prevailed for several millennia and continued into the twentieth century.

With mountains common throughout the country and arable farm land being less than 30 percent of the total land area, the Korean geography has influenced the Korean farmer to experiment with intensive farming, utilizing stepped farming on hillsides and creative irrigation. The same geography has also served as a impetus for farmers to live close together in villages as extended families traditionally living in the same farmhouse. That practice has declined since 1945 as Korea's modernization has created factory and professional jobs requiring children to move to major cities, especially Seoul, for work.

Fishing has played an instrumental role in Korea's economy and Korean's diet. Almost every meal enjoys servings of seafood. Until recently, beef and pork had been eaten sparingly with seafood making up the largest part of the Korean's diet. With beef and pork becoming more available, the average Korean has become taller and heavier. Fish still makes up a high percentage of protein source in the Korean diet. The health benefits of seafood have helped Koreans maintain good health. Curiously, although a sea bound peninsula, Koreans have traditionally not been a seafaring people. 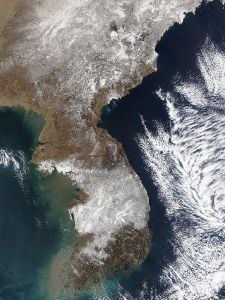 Part of the East Asian monsoonal region, South Korea has a temperate climate with four distinct seasons. The movement of air masses from the Asian continent exerts greater influence on South Korea's weather than does air movement from the Pacific Ocean. Winters are usually long, cold, and dry, whereas summers are short, hot, and humid. Spring and autumn are pleasant but short in duration. Seoul's mean temperature in January is −5° C to −2.5° C; in July the mean temperature is about 22.5° C to 25° C. Because of its southern and seagirt location, Jeju Island has warmer and milder weather than other parts of South Korea. Mean temperatures on Jeju range from 2.5° C in January to 25° C in July.

The country generally has sufficient rainfall to sustain its agriculture. Rarely does less than 75 centimeters of rain fall in any given year; for the most part, rainfall is over 100 centimeters. Amounts of precipitation, however, can vary from year to year. Serious droughts occur about once every eight years, especially in the rice-producing southwestern part of the country. About two-thirds of the annual precipitation occurs between June and September.

South Korea is less vulnerable to typhoons than Japan, Taiwan, the east coast of China, or the Philippines. From one to three typhoons can be expected per year. Typhoons usually pass over South Korea in late summer, especially in August, and bring torrential rains. Flooding occasionally causes considerable damage. In September 1984, record floods caused the deaths of 190 people and left 200,000 homeless. This disaster prompted the North Korean government to make an unprecedented offer of humanitarian aid in the form of rice, medicine, clothes, and building materials. South Korea accepted these items and distributed them to flood victims.

Resources and land use