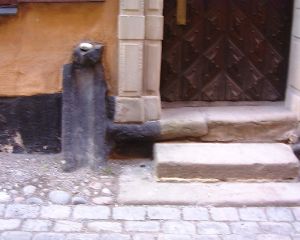 A preserved medieval waste pipe in Stockholm Old Town used to guide sewage onto the street where rain eventually would carry it away.

Sewage is the mainly liquid waste containing some solids produced by humans, typically consisting of washing water, urine, feces, laundry waste, and other material that goes down drains and toilets from households and industry. It is a type of wastewater and is a major actual or potential source of pollution, especially in urban areas. It has been estimated that pollution of drinking water by feces is by far the biggest cause of death worldwide. To prevent pollution of the environment by sewage, there need to be well-organized services that manage the collection, treatment, and recycling or safe disposal of sewage in the environment.

Historically, raw sewage was directed to a natural body of water, such as a river or ocean, where it would be diluted and dissipated. Early human habitations were often built next to water sources, and rivers doubled as a crude form of natural sewage disposal. According to Teresi et al. (2002)[5]:

The Indus architects designed sewage disposal systems on a large scale, building networks of brick effluent drains following the lines of the streets. The drains were seven to ten feet wide, cut at two feet below ground level with U-shaped bottoms lined with loose brick easily taken up for cleaning. At the intersection of two drains, the sewage planners installed cesspools with steps leading down into them, for periodic cleaning. By 2700 B.C.E., these cities had standardized earthenware plumbing pipes with broad flanges for easy joining with asphalt to stop leaks.

The first sanitation system was found in the prehistoric Middle East and the surrounding areas. The first time an inverted siphon system was used, along with glass covered clay pipes, was in the palaces of Crete, Greece. It is still in working condition, after about 3,000 years.

Ancient Minoan civilization had stone sewers that were periodically flushed with clean water.

Roman towns and garrisons in the United Kingdom between 46 BCE and 400 CE had complex sewer networks. They were sometimes constructed out of hollowed out elm logs shaped so that they butted together, with the downstream pipe providing a socket for the upstream pipe.

Higher population densities required more complex sewer collection and conveyance systems in order to achieve some degree of sanitary conditions in crowded cities. The ancient cities of Harappa and Mohenjo-daro of the Indus Valley civilization constructed complex networks of brick-lined sewage drains from around 2600 BCE and also had outdoor flush toilets connected to this network.

The urban areas of the Indus Valley civilization provided public and private baths, sewage was disposed through underground drains built with precisely laid bricks, and a sophisticated water management system with numerous reservoirs was established. In the drainage systems, drains from houses were connected to wider public drains.[6]

The system then remained with not much progress until the sixteenth century, where, in England, Sir John Harrington invented a device for Queen Elizabeth (his Godmother) that released wastes into cesspools.

A significant development was the construction of a network of sewers to collect wastewater, which began from the Indus Valley civilization. In some cities, including Rome and Istanbul (Constantinople), networked ancient sewer systems continue to function today as collection systems for those cities' modernized sewer systems. Instead of flowing to a river or the sea, the pipes have been re-routed to modern sewer treatment facilities.

However, many cities had no sewers and relied on nearby rivers or occasional rain to wash away sewage. In some cities, waste water simply ran down the streets, which had stepping stones to keep pedestrians out of the muck, and eventually drained as runoff into the local watershed. This was enough in early cities with few occupants but the growth of cities quickly overpolluted streets and became a constant source of disease. Even as recently as the late nineteenth century, sewerage systems in parts of the highly industrialized United Kingdom were so inadequate that water-borne diseases such as cholera and typhoid were still common. In Merthyr Tydfil, a large town in South Wales, most houses discharged their sewage to individual cess-pits that persistently overflowed causing the pavements to be awash with foul sewage.

A sewer bed is a piece of land typically used by a municipality for the dumping of raw sewage. In the past, raw sewage was brought by truck or drawn by horses to be dumped, but the practice stopped back in the 1940s.

A system of sewer pipes (sewers) collects sewage and takes it for treatment or disposal. The system of sewers is called sewerage or sewerage system in UK English and sewage system in U.S. English. Where a main sewerage system has not been provided, sewage may be collected from homes by pipes into septic tanks or cesspits, where it may be treated or collected in vehicles and taken for treatment or disposal. Properly functioning septic tanks require emptying every 2-5 years, depending on the load of the system.

Sewage and wastewater is also disposed of to rivers, streams and the sea in many parts of the world. Doing so can lead to serious pollution of the receiving water. This is common in third world countries and may still occur in some developed countries, where septic tank systems are too expensive.

A sewage system may convey the wastewater by gravity to a sewage treatment plant. Where pipeline excavation is difficult because of rock or there is limited topographic relief (i.e., due to flat terrain), gravity collection systems may not be practical and the sewage must be pumped through a pipeline to the treatment plant. In low-lying communities, wastewater may be conveyed by vacuum. Pipelines range in size from pipes of six inches (150 mm) in diameter to concrete-lined tunnels of up to 30 feet (10 m) in diameter.

Sewage can also be collected by low pressure pumps and vacuum systems. A low-pressure system uses a small grinder pump located at each point of connection, typically a house or business. Vacuum sewer systems use differential atmospheric pressure to move the liquid to a central vacuum station. Typically, a vacuum sewer station can service approximately 1,200 homes before it becomes more cost-effective to build another station.

Design and analysis of collection systems

Design and sizing of sewage collection systems considers population served, commercial and industrial flows, flow peaking characteristics and wet weather flows. Combined sewer systems are designed to transport both storm water runoff and sewage in the same pipe. Besides the projected sewage flow, the size and characteristics of the watershed are the overriding design considerations for combined sewers. Often, combined sewers cannot handle the volume of runoff, resulting in combined sewer overflows and causing water pollution problems in nearby water bodies.

Sewage treatment, or domestic wastewater treatment, is the process of removing contaminants from wastewater and household sewage, both runoff (effluents) and domestic. It includes physical, chemical and biological processes to remove physical, chemical and biological contaminants. Its objective is to produce a waste stream (or treated effluent) and a solid waste or sludge suitable for discharge or reuse back into the environment. This material is often inadvertently contaminated with many toxic organic and inorganic compounds.

Sewage is created by residences, institutions, hospitals and commercial and industrial establishments. It can be treated close to where it is created (in septic tanks, biofilters or aerobic treatment systems), or collected and transported via a network of pipes and pump stations to a municipal treatment plant. Sewage collection and treatment is typically subject to local, state, and federal regulations and standards. Industrial sources of wastewater often require specialized treatment processes.

The sewage treatment involves three stages, called primary, secondary, and tertiary treatment. First, the solids are separated from the wastewater stream. Then, dissolved biological matter is progressively converted into a solid mass by using indigenous, water-borne microorganisms. Finally, the biological solids are neutralized and disposed of or re-used, and the treated water may be disinfected chemically or physically (for example by lagoons and micro-filtration). The final effluent can be discharged into a stream, river, bay, lagoon or wetland, or it can be used for the irrigation of a golf course, green way or park. If it is sufficiently clean, it can also be used for groundwater recharge or agricultural purposes.

Raw influent (sewage) includes household waste liquid from toilets, baths, showers, kitchens, sinks, and so forth that is disposed of via sewers. In many areas, sewage also includes liquid waste from industry and commerce. The separation and draining of household waste into greywater and blackwater is becoming more common in the developed world, with greywater being permitted to be used for watering plants or recycled for flushing toilets. A lot of sewage also includes some surface water from roofs or hard-standing areas. Municipal wastewater therefore includes residential, commercial, and industrial liquid waste discharges, and may include storm water runoff.

Sewage systems capable of handling storm water are known as combined systems or combined sewers. Such systems are usually avoided since they complicate and thereby reduce the efficiency of sewage treatment plants owing to their seasonality. The variability in flow also leads to often larger than necessary, and subsequently more expensive, treatment facilities. In addition, heavy storms that contribute more flows than the treatment plant can handle may overwhelm the sewage treatment system, causing a spill or overflow (called a combined sewer overflow, or CSO, in the United States). It is preferable to have a separate storm drain system for storm water in areas that are developed with sewer systems.

As rainfall runs over the surface of roofs and the ground, it may pick up various contaminants including soil particles and other sediment, heavy metals, organic compounds, animal waste, and oil and grease. Some jurisdictions require storm water to receive some level of treatment before being discharged directly into waterways. Examples of treatment processes used for storm water include sedimentation basins, wetlands, buried concrete vaults with various kinds of filters, and vortex separators (to remove coarse solids).