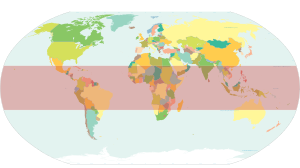 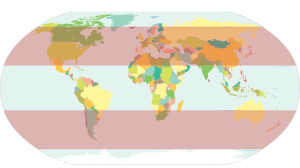 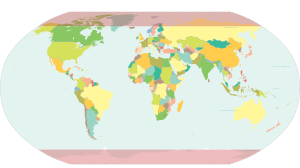 The idea of a Geographical zone was first hypothesized by the ancient Greek scholar Aristotle in an attempt to classify the world's climatic zones. He determined three types of climatic zones based upon location in relation to the equator. While his mapping was oversimplified due to limited geographical knowledge available at the time, his general understanding was correct. As knowledge of the earth's geography improved, the geographical zones increased to five, based upon each of five main latitude regions divided by the major circles of latitude.

The equator is the imaginary line on the Earth's surface that is equidistant from both the North Pole and South Poles and divides the Earth into the Northern Hemisphere and the Southern Hemispheres. It is from this point that latitude is calculated, in other words, it is the 0° latitude line. Including the equator, there are five major circles of latitude, from north to south:

These circles of latitude (excluding the equator) mark the divisions between the five principal geographical zones. Arcs of circles of latitude are sometimes used as boundaries between countries or regions where distinctive natural borders are lacking (such as in deserts), or when an artificial border is drawn as a "line on a map," as happened in Korea. 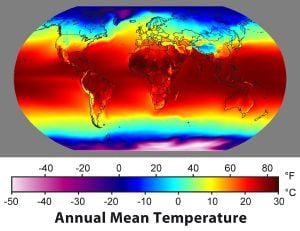 Map of annual average temperatures as a function of location.

Each of the five main latitude regions of the earth's surface is said to be a geographical zone, divided by the major circles of latitude. The differences between them relate to climate, and the behavior of the sun. They are as follows:

In the Torrid Zone, also known as the Tropics, the sun is directly overhead at least once during the year—at the edges of the tropics this occurs at the summer solstice, and over the equator, at the equinoxes. This is the hottest part of the earth, and there are two annual seasons: a dry and a wet. The Torrid Zone includes most of Africa, southern India, southern Asia, Indonesia, New Guinea, northern Australia, southern Mexico, Central America, and northern South America.

The two Frigid Zones, or polar regions, experience the midnight sun and the polar night for part of the year—the edge of the zone experiences one day at the solstice when the sun doesn't rise or set for 24 hours, while in the center of the zone (the pole), the day is literally one year long, with six months of daylight and six months of night. The Frigid Zones are the coldest parts of the earth, and are covered with ice and snow. The North Frigid Zone (the Arctic) includes northern Canada and Alaska, Greenland, northern Scandinavia, northern Russia, and the Arctic ice. The South Frigid Zone (The Antarctic) is filled by the continent of Antarctica; the next closest mainland is the southern tip of Chile and Argentina, followed by New Zealand.

While both the North and South Poles are in frigid zones, there is a vast difference in temperature between the two. The North Pole lies at sea level in the middle of the Arctic Ocean, which acts as a reservoir of heat.The sea ice at the North Pole is typically around two or three meters thick,[1] though there is considerable variation and occasionally the movement of floes exposes clear water.[2] The South Pole sits atop a featureless, windswept, icy plateau at an altitude of 9,306 feet (2,836 m), about 8,000 miles (13,000 km) from the nearest sea at McMurdo Sound. The ice is estimated to be about 9,000 feet (2,700 m) thick at the Pole.[3] Winter temperatures at the North Pole can range from about −45ºF (−43°C) to −15°F (−26°C), perhaps averaging around −30ºF (−34°C). Summer temperatures (June, July and August) average around the freezing point (0°C, 32°F).[4] In comparison, the winter temperature at the South Pole remains steady at around −85°F (−65°C). The highest temperature ever recorded at the Amundsen-Scott South Pole Station is 7.5°F (−13.6°C), and the lowest is −117.0°F (−82.8°C).[5]

The idea of a geographical zone was first hypothesized by the ancient Greek scholar Aristotle. He said that the earth was divided into three types of climatic zones, based on their distance from the equator.

Thinking that the area near the equator was too hot for habitation, Aristotle dubbed the region around the equator (from 23.5° N to 23.5° S) as the "Torrid Zone." He reasoned that from the Arctic Circle to the pole was permanently frozen. He called this uninhabitable zone the "Frigid Zone." The only area that Aristotle believed was livable was the "Temperate Zone," lying between the "Frigid Zone" and the "Torrid Zone." One of the reasons Aristotle believed that the Temperate Zone was the best for life possibly stems from the fact that he lived in that zone. 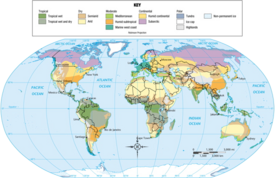 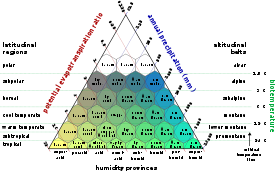 Holdridge life zone classification scheme. Although conceived as three-dimensional by its originator, is usually shown as a two-dimensional array of hexagons in a triangular frame.

The Köppen system, however, has its drawbacks. A modified version of the Köppen system known as the Trewartha climate classification scheme attempts to redefine the broad climatic groups in such a way as to be closer to vegetational zoning, especially in the United States. Under the standard Köppen system western Washington and Oregon are classed into the same climate as southern California, even though the two regions have strikingly different vegetation. It also classes southern New England into the same climate as the Gulf Coast. Trewartha's modifications sought to reclassify the Pacific Northwest seaboard as a different climate from California, and New England from the Gulf Coast.

The Holdridge life zones system is a global bioclimatic scheme for the classification of land areas. It was first published by Leslie Holdridge in 1947, and updated in 1967. It is a relatively simple system based on few empirical data, giving objective mapping criteria. A basic assumption of the system is that both soil and climax vegetation can be mapped once climate is known. While it was first designed for tropical and subtropical area, the system applies globally. The system has been shown to fit tropical vegetation zones, Mediterranean zones, and boreal zones, but is less applicable to cold oceanic or cold arid climates where moisture becomes the determining factor. The system has found a major use in assessing the possible changes in natural vegetation patterns due to global warming.