The South Pole, also known as the geographic South Pole or Terrestrial South Pole, is the southernmost point on the surface of the Earth, on the opposite side of the Earth from the North Pole. The geographic South Pole is best defined as one of two points where the Earth’s axis intersects its surface. This is different from the south magnetic pole, which is defined by Earth’s magnetic field, and is always in a different location than the physical South Pole. Because of its remote location, desert climate, and extreme temperatures, the geographic South Pole is one of the last places on Earth to be explored. Explorer Roald Amundsen and his party were the first people to reach the South Pole in 1911. Currently it is the site of the US Amundsen-Scott South Pole Station, which was established in 1956 and has been permanently staffed since that date.

The South Pole is a central site for environmental research and provides valuable data for scientists to understand trends in the global climate, such as global warming and ozone depletion. As international cooperation is a major factor in the exploration of and the research conducted on the Antarctic continent, a commitment to peaceful and efficient international cooperation is crucial in solving the earth's environmental problems. 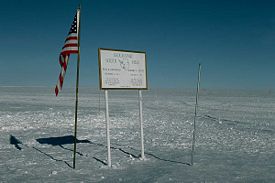 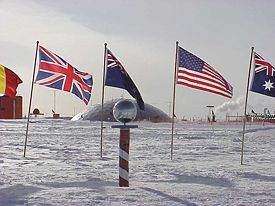 The Ceremonial South Pole. The Pole Station's old dome is in the background.

The coordinates of the South Pole are usually given simply as 90°S, since its longitude is geometrically undefined and irrelevant. When a longitude is desired, it may be given as 0°W.

The South Pole is located on the continent of Antarctica, although this has not been the case for all of Earth's history, because of continental drift). It sits atop a featureless, windswept, icy plateau at an altitude of 9,306 feet (2,835 meters), about 800 miles (1,287 km) from the nearest sea at McMurdo Sound. The ice is estimated to be about 9,000 feet (2,700 meters) thick at the Pole, so the land surface is actually near sea level.[1]

The polar ice sheet is moving at a rate of roughly 33 feet (10 meters) per year. Thus, relative to the ice surface and the buildings constructed on it, the exact position of the Pole gradually shifts over time.

The geographic South Pole is marked by a small sign, and a stake, which are repositioned each year on New Year’s Day to compensate for the movement of the ice. The sign records the respective dates that Roald Amundsen and Robert F. Scott reached the Pole followed by a short quotation from each man, and gives the elevation as 9,301 ft.

The Ceremonial South Pole is an area set aside for photo opportunities at the South Pole Station. It is located a short distance from the geographic South Pole, and consists of a metallic sphere on a plinth, surrounded by the flags of the Antarctic Treaty signatories: Argentina, Australia, Belgium, Chile, the French Republic, Japan, New Zealand, Norway, Republic of South Africa, Russia, United Kingdom of Great Britain and Northern Ireland, and the United States.[2]

The ceremonial marker is not moved each year, so its position relative to the geographic South Pole slowly changes over time as it drifts with the ice.

The geographic South Pole should not be confused with the south magnetic pole. Earth’s magnetic field is generated by a dipole magnet, which is something like a straight magnet with each end being the north and south poles, respectively. The axis of the dipole is offset by Earth’s rotation by approximately 11 degrees, which means the geographic and magnetic poles are not in the same location. The south magnetic pole is characterized by the magnetic declination, the horizontal intensity, and the vertical intensity of Earth’s magnetic field. The geographic South Pole does not depend on these factors, but simply the rotation of the earth. Yet another South Pole remains, which is slightly different than the magnetic south pole: the geomagnetic south pole, which will be described later.[3]

The south magnetic pole is constantly shifting due to changes in the Earth's magnetic field, and the three aforementioned intensity factors. As of 2005 it was calculated to lie at 64.53°S 137.86°E [4] just off the coast of Wilkes Land, Antarctica. It is moving north west by about six to nine miles (10 to 15 km) per year (see also Polar drift).

On January 16, 1909 three men (Douglas Mawson, Edgeworth David, and Alistair Mackay) from Sir Ernest Shackleton's Nimrod Expedition claimed to have found the south magnetic pole, which was at that time located on land. However, there is now some doubt as to whether their location was correct [6] Amundsen-Scott South Pole Station. The ceremonial pole and flags can be seen in the background, slightly to the left of center, below the tracks behind the buildings. The actual geographic pole is a few more metres to the left. The buildings are raised on stilts to prevent snow buildup.

The first humans to reach the geographic South Pole were Norwegian Roald Amundsen and his party on December 14, 1911. Amundsen named his camp Polheim and the entire plateau surrounding the Pole Haakon VII's Vidde in honour of King Haakon VII of Norway. Amundsen's competitor, Briton Robert Falcon Scott reached the Pole a month later. On the return trip Scott and his four companions all died of starvation and extreme cold. In 1914 British explorer Ernest Shackleton's Imperial Trans-Antarctic Expedition set out with the goal of crossing Antarctica via the South Pole, but the Endurance became lodged in pack-ice and sank 11 months later.

US Admiral Richard Byrd, with the assistance of his first pilot Bernt Balchen, became the first person to fly over the South Pole on November 29, 1929. However, it was not until October 31, 1956 that men once again set foot at the Pole, when a party led by Admiral George Dufek of the US Navy landed there in a R4D Skytrain (Douglas DC-3) aircraft. The US Amundsen-Scott South Pole Station was established by air over 1956–1957 for the International Geophysical Year, and has been continuously staffed since then by research and support personnel.

After Amundsen and Scott, the next people to reach the South Pole overland (albeit with some air support) were Edmund Hillary (Jan. 4, 1958) and Vivian Fuchs (Jan. 19, 1958), and their respective parties, during the Commonwealth Trans-Antarctic Expedition. There have been many subsequent expeditions to arrive at the South Pole by surface transportation, including those by Havola, Crary and Fiennes.

On December 30, 1989, Arved Fuchs and Reinhold Messner were the first to reach the South pole without animal or motorized help, using only skis and the help of wind.

The record for the fastest unsupported walking journey to the geographic South Pole from the ocean is 47 days and was set in 1999 by explorers Tim Jarvis and Peter Treseder, who manhauled 200 kg sleds containing food and cooking fuel.

During the southern winter the South Pole receives no sunlight at all, and in summer the sun, though continuously above the horizon, is always low in the sky. Much of the sunlight that does reach the surface is reflected by the white snow. This lack of warmth from the sun, combined with the high altitude (about 2,800 meters), means that the South Pole has one of the coldest climates on earth. Temperatures at the South Pole are much lower than at the North Pole, primarily because the South Pole is located at altitude in the middle of a continental land mass, while the North Pole is at sea level in the middle of an ocean (which acts as a reservoir of heat).

The South Pole has a desert climate, almost never receiving any precipitation. Air humidity is near zero. However, high winds can cause the blowing of snowfall, and the accumulation of snow amounts to about 20 cm per year.[9] The dome seen in the pictures is partially buried due to snow storms, and the entrance to the dome has to be regularly bulldozed to uncover it. More recent buildings are raised on stilts so that the snow does not build up against the side of them.

In most places on Earth, local time is more or less synchronized to the position of the sun in the sky. This fails at the South Pole, which has "days" lasting for a whole year. There is no a priori reason for placing the South Pole in any particular time zone, but as a matter of practical convenience the Amundsen-Scott South Pole Station keeps New Zealand time. This is because the US flies its resupply missions ("Operation Deep Freeze") out of Christchurch, New Zealand.

Due to its exceptionally harsh climate, there are no native resident plants or animals at the South Pole. Remarkably, though, large seabirds called skuas, believed to be off-course, are occasionally seen there.[10]

In 2000 it was reported that microbes had been detected living in the South Pole ice, though scientists think it unlikely that they evolved in Antarctica.[11]