The World Factbook (ISSN 1553-8133; also known as the CIA World Factbook)[2] is an annual publication of the Central Intelligence Agency of the United States with almanac-style information about the countries of the world. The Factbook provides a two- to three-page summaries of the demographics, geography, communications, government, economy, and military of 266[3] U.S.-recognized countries, dependencies, and other areas in the world.

The World Factbook is prepared by the CIA for the use of U.S. government officials, and its style, format, coverage, and content are primarily designed to meet their requirements.[4] However, it is frequently used as a resource for research papers and Web sites.[5] As a work of the U.S. government, it is in the public domain.[6]

Although the book title is "factbook" and readers tend to perceive the World Factbook as a simple book of facts and statistics, these "facts" may reflect the political perspectives of the U.S. government in its treatment of disputed areas.

In researching the Factbook, the CIA uses the sources listed below. Other public and private sources are also consulted.[4] 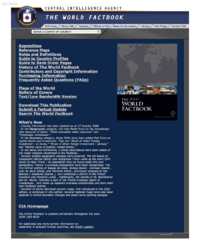 The World Factbook website as it appeared in January 2008

Because the Factbook is in the public domain, people are free to redistribute and modify it in any way that they like, without permission of the CIA.[4] However, the CIA requests that it be cited when the Factbook is used.[6] The official seal of the CIA, however, may not be copied without permission as required by the CIA Act of 1949 (50 U.S.C. section 403m). Misuse of the official seal of the CIA could result in civil and criminal penalties.[7]

Frequency of updates and availability

Before November 2001, The World Factbook website was updated yearly.[8] Since then, the Factbook website is updated every two weeks; the print edition is still updated annually.[8] Generally, information currently available as of January 1 of the current year[9] is used in preparing the printed Factbook, which is released around the middle of each year.[8]

Government edition of the Factbook

The first classified edition of Factbook was published in August 1962 and the first unclassified version in June 1971.[10] The World Factbook has been available to the public in print since 1975[10] and on the World Wide Web since October 1994.[11] The Web version gets an average of 6 million visits per month;[5] it can also be downloaded.[12] The official printed version is sold[13] at cost by the Government Printing Office and National Technical Information Service. In past years, the Factbook was available on CD-ROM,[14] microfiche, magnetic tape, and floppy disk.[15]

Many Internet sites use information and images from the CIA World Factbook.[16] Several publishers, including Grand River Books, Potomac Books (formerly known as Brassy's Inc.),[17] and Skyhorse Publishing[18] have re-published the factbook in recent years.

Entities in the Factbook

As of February 2008, The World Factbook consists of 266 entities.[3] These entities can be divided into categories.[3] They are:

Specific regions within a country or areas in dispute among countries, such as Kashmir, are not covered,[19] but other areas of the world whose status is disputed, such as the Spratly Islands, have entries.[19][20] Subnational areas of countries (such as US States or the Canadian provinces and territories) are not included in the Factbook. Instead, users looking for information about subnational areas are referred to "a good encyclopedia" for their reference needs.[21] This criterion was invoked in the 2007 edition with the decision to drop the entries for French Guiana, Guadeloupe, Martinique, and Reunion. They were dropped because besides being overseas departments, they were now overseas regions, and an integral part of France.[22]

Kashmir
Maps depicting Kashmir have the India–Pakistan border drawn at the Line of Control, but the region of Kashmir administered by China drawn in hash marks.[23]
Northern Cyprus
Northern Cyprus, which the U.S. considers part of the Republic of Cyprus, is not given a separate entry because "territorial occupations/annexations not recognized by the United States Government are not shown on U.S. Government maps."[24]
Taiwan/Republic of China
Taiwan has a separate entry not listed under T, but at the bottom of the list.[25] The name "Republic of China" is not listed as Taiwan's "official name" under the "Government" section,[26] due to U.S. acknowledgement of Beijing's and Taipei's One-China policy according to which there is one China and Taiwan is a part of it.[27] The name "Republic of China" was briefly added on January 27, 2005,[28] but has since been changed back to "none".[26] The map of the Peoples Republic of China on the World Factbook shows Taiwan included on the map of China.[29]
Burma/Myanmar
The U.S. does not recognize the renaming of Burma by its ruling military junta to Myanmar and thus keeps its entry for the country under "Burma." This is done because the name change "was not approved by any sitting legislature in Burma." As a result, the US government has never adopted the name Myanmar.[30]
Macedonia
The Republic of Macedonia is entered as Macedonia,[31] the name used in its first entry in the Factbook upon independence in 1992.[32] In the 1994 edition, the name of the entry was changed to the Former Yugoslav Republic of Macedonia as a result of the Macedonia naming dispute with Greece, which objected to the use of the name "Macedonia".[33] For the next decade, this was the name the nation was listed under. Finally, in the 2004 edition of the Factbook, the name of the entry was changed back to Macedonia following a November 2004 US decision to refer to the country using this name.[34][35]

European Union
On December 16, 2004, the CIA added an entry for the European Union (EU).[36] (Before this date, the EU was excluded from the Factbook.[37] According to the CIA, the European Union was added because the EU "continues to accrue more nation-like characteristics for itself".[27]
United States Pacific Island Wildlife Refuges and Iles Eparses
In the 2006 edition of The World Factbook, the entries for Baker Island, Howland Island, Jarvis Island, Kingman Reef, Johnston Atoll, Palmyra Atoll and the Midway Islands were merged into a new United States Pacific Island Wildlife Refuges entry.[38] The old entries for each individual insular area remain as redirects on the Factbook website. On September 7, 2006, the CIA also merged the entries for Bassas da India, Europa Island, the Glorioso Islands, Juan de Nova Island, and Tromelin Island into a new Iles Eparses entry.[39] As with the new United States Pacific Island Wildlife Refuges entry, the old entries for these five islands remained as redirects on the website.[40] On July 19, 2007, the Iles Eparses entry and redirects for each island were dropped due to the group becoming a district of the French Southern and Antarctic Lands in February.[41]

Serbia and Montenegro/Yugoslavia
The Socialist Federal Republic of Yugoslavia (SFRY) broke apart in 1991. The following year, it was replaced in the Factbook with entries for each of its former constituent republics.[32] In doing this, the CIA listed the Federal Republic of Yugoslavia, proclaimed in 1992, as Serbia and Montenegro, as the U.S. did not recognize the union between the two republics.[42][43] This was done in accordance with a May 21, 1992, decision[44] by the U.S. not to recognize any of the former Yugoslav republics[45] as successor states to the recently dissolved SFRY. 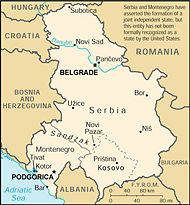 A map of Yugoslavia from the 2000 edition of The World Factbook.[46] Notice how the disclaimer is printed in the upper right hand corner. One can see how the capital cities of both republics are individually labeled on the map.

These views were made clear in a disclaimer printed in the Factbook: Serbia and Montenegro have asserted the formation of a joint independent state, but this entity has not been recognized as a state by the United States.[47]

Montenegro and Serbia were treated separately in the Factbook data, as can be seen on the map.[48] In October 2000, Slobodan Milošević was forced out of office after a disputed election.[49] This event led to democratic elections and U.S. diplomatic recognition. The 2001 edition of the Factbook thus referred to the state as Yugoslavia.[50] On March 14, 2002, an agreement was signed to transform the FRY into a loose state union called Serbia and Montenegro;[51] it took effect on February 4, 2003.[52] The name of the Yugoslavia entity was altered in the Factbook the month after the change.[53]

On February 28, 2008, the CIA added an entry for Kosovo;[54] before this, Kosovo was excluded in the Factbook.[19] The Kosovo declaration of independence is disputed by Serbia,[55] which continues to regard Kosovo as its own territory, and other countries.

On July 19, 2007, the entry for East Timor was renamed Timor-Leste following a decision of the US Board on Geographic Names (BGN).[56]

Before 1998, the United Kingdom profile contained a sentence that asserted the UK had gained independence on 1 January 1801.[57] This terse, confusing description in reference to the Act of Union 1801 has since been greatly expanded.[58]

This is a list of International Standard Book Numbers (ISBNs) for the Government edition[59] of The World Factbook. ISBNs for the Potomac Books and Skyhorse Publishing reprints of the Factbook are noted as well. For the reprint editions, the year of the data is in parentheses.

This article contains material from the CIA World Factbook which, as a U.S. government publication, is in the public domain.

Retrieved from https://www.newworldencyclopedia.org/p/index.php?title=The_World_Factbook&oldid=1031347
Categories:
Hidden category:
This page was last edited on 24 January 2020, at 21:01.
Content is available under Creative Commons Attribution/Share-Alike License; additional terms may apply. See Terms of Use for details.