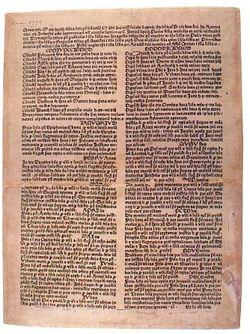 Calendarium cracoviense, an almanac for the year 1474.

An almanac (also spelled almanack and almanach) is an annual publication that contains tabular information in a particular field organized according to a calendar. Astronomical data and various statistics are also found in almanacs, such as the times of the rising and setting of the sun and moon, eclipses, hours of full tide, stated festivals of churches, terms of courts, lists of all types, timelines, and more.

The calendar is not only a tool for organizing information and dates, but it acts as an important reference point for religious, astronomical, agricultural, political, and other activities. The almanac is a natural byproduct of the calender and serves as a reference source for all civilizations and cultures. This article primarily deals with almanacs developed in Western civilizations.

The word "almanac" was borrowed into English from the al-manakh.[1] The ultimate origin of the word is unknown[2], but both Arabic manah[3], "to reckon," and Egyptian almenichiata[4] "the supernatural rulers of the celestial bodies," have been suggested.

The origin of the almanac can be traced back to ancient Babylonian astronomy, when tables of planetary periods were produced in order to predict lunar and planetary phenomena.[1]

The precursor to the almanac was the Hellenistic astronomical and meteorological calendar, the parapegma, a stone in which the days of the month were indicated by movable pegs inserted into bored holes. According to Diogenes Laertius, Parapegma was the title of a book by Democritus. Ptolemy, the Alexandrian astronomer (second century) wrote a treatise, Phaseis—"phases of fixed stars and collection of weather-changes" is the translation of its full title—the core of which is a parapegma, a list of dates of regular seasonal weather changes, first appearances and last appearances of stars or constellations at sunrise or sunset, and solar events such as solstices, all organized according to the solar year. With the astronomical computations were expected weather phenomena, composed as a digest of observations made by various authorities of the past. Parapegmata had been composed for centuries. Similar treatises called Zij were later written in medieval Islamic astronomy.

Ptolemy believed that the astronomical phenomena caused the changes in seasonal weather; his explanation of why there was not an exact correlation of these events was that the physical influences of other heavenly bodies also came into play. Hence for him, weather prediction was a special division of astrology.[5]

The modern almanac differs from Babylonian, Ptolemaic and Zij tables. In the modern almanac, "the entries found in the almanacs give directly the positions of the celestial bodies and need no further computation," in contrast to the more common "auxiliary astronomical tables" based on Ptolemy's Almagest. The earliest known almanac in this modern sense is the Almanac of Azarqueil written in 1088 by Abū Ishāq Ibrāhīm al-Zarqālī (Latinized as Azarqueil) in Toledo, al-Andalus. The work provided the true daily positions of the sun, moon and planets for four years from 1088 to 1092, as well as many other related tables. A Latin translation and adaptation of the work appeared as the Tables of Toledo in the twelfth century and the Alfonsine tables in the thirteenth century.[1]

After almanacs were devised, people still saw little difference between predicting the movements of the stars and tides and predicting the future as in divination. Early almanacs therefore contained general horoscopes in addition to concrete information. In 1150 Solomon Jarchus created such an almanac considered to be among the first modern almanacs. Copies of twelfth-century almanacs are found in the British Museum, and in the Universities of Oxford and Cambridge. In 1300, Petrus de Dacia created an almanac (Savilian Library, Oxford). This was the same year Roger Bacon, OFM, produced his as well. In 1327, Walter de Elvendene created an almanac and later on John Somers of Oxford, in 1380. In 1386, Nicholas de Lynne, Oxford produced an almanac. In 1457, the first printed almanac was published at Mainz, by Gutenberg. Regio-Montanus produced an almanac in 1472 (Nuremberg 1472), which was continued in print for several centuries in many editions. In 1497, the Sheapheard’s Kalendar, translated from French (Richard Pynson) is the first English printed almanac. Richard Allestree's almanac is one of the first modern English almanacs. In British America, William Pierce of Harvard College published the first American almanac entitled, An Almanac for New England for the year 1639. Harvard became the first center for the annual publication of almanacs with various editors including Samuel Danforth, Oakes, Cheever, Chauncey, Dudley, Foster, and others. An almanac maker going under the pseudonym of Poor Richard, Knight of the Burnt Island, began to publish [Poor Robin's Almanack] one of the first comic almanacs that parodied these horoscopes in its 1664 issue, which included sayings like, "This month we may expect to hear of the Death of some Man, Woman, or Child, either in Kent or Christendom." Other noteworthy comic almanacs include those published from 1687-1702 by John Tully of Saybrook, Connecticut. The most important early American almanacs were made from 1726-1775 by Nathaniel Ames of Dedham, Massachusetts. A few years later James Franklin began publishing the Rhode-Island Almanack beginning in 1728. Five years later his brother Benjamin Franklin began publishing, Poor Richard’s Almanack from 1733-1758. The best source for American almanacs is Milton Drake, Almanacs of the United States written in 2 volumes.

Currently published almanacs such as Whitaker's Almanack have expanded their scope and contents beyond that of their historical counterparts. Modern almanacs include a comprehensive presentation of statistical and descriptive data that encompasses the entire world. Contents also include discussions of topical developments and a summary of recent historical events. Other currently published almanacs (ca. 2006) include TIME Almanac with Information Please, World Almanac and Book of Facts, and The Old Farmer's Almanac.

The Old Farmer's Almanac is a reference book that contains weather forecasts, tide tables, planting charts, astronomical data, recipes, and articles on a number of topics including gardening, sports, astronomy, and farming. The book also features anecdotes and a section that predicts trends in fashion, food, home décor, technology, and living for the coming year.

Released the second Tuesday in September of the year prior to the year printed on its cover, The Old Farmer's Almanac has been published continuously since 1792, making it the oldest continuously published periodical in North America.[6]

Whitaker's Almanack is a reference book, published annually in the United Kingdom. The book was originally published by J Whitaker & Sons from 1868 to 1997, then by The Stationery Office, and since 2003 by A & C Black, part of Bloomsbury Publishing Plc.

The Almanack consists of articles, lists and tables on a wide range of subjects including education, the peerage, government departments, health and social issues, and the environment.

The largest section is the countries directory, which includes recent history, politics, economic information, and culture overviews. Each edition also features a selection of critical essays focusing on events of the previous year. Extensive astronomical data covering the forthcoming year is published at the rear of the book.

Whitaker's Almanack is not an encyclopedia but more of a yearbook of contemporary matters and a directory of various establishments in the United Kingdom (such as clubs, public bodies and universities).

Whitaker's was prized enough that Winston Churchill took a personal interest in the continued publication of the book after its headquarters were destroyed in The Blitz[7]; a copy is also sealed in Cleopatra's Needle on the north bank of the River Thames.[7]</ref>

Each year's Almanack is published in two formats - the Standard Edition and a shortened Concise Edition. In previous years, a larger-format of the Standard Edition, bound in leather, was produced for libraries. Both editions were redesigned in 1993 and 2004 to increase the page size and improve legibility.

The NYTA is the successor to the Universal Almanac. Its publisher, Andrews & McMeel, decided to discontinue that almanac, with the final edition being the 1997 issue. John W. Wright, the editor of the Universal Almanac, owned the rights to its content. He approached The New York Times Company, who agreed with his idea of creating a new almanac with the newspaper's name on it. Penguin was then brought in as the publisher.

Wright became the general editor of the NYTA, a position he continues (as of 2008) to hold. The 1998 edition of the almanac included a good deal of information from the Universal Almanac, with some members of The Times news staff contributing articles about the major news events of the year, as well as the maps in the book.

The World Almanac and Book of Facts

The World Almanac and Book of Facts is an American-published reference work and is the bestselling[8] almanac conveying information about such subjects as world changes, tragedies, sports feats, etc. The almanac can be found in homes, libraries, schools, businesses, and media outlets throughout the United States and to a more limited degree in other parts of the world.

Retrieved from https://www.newworldencyclopedia.org/p/index.php?title=Almanac&oldid=1052771
Categories:
Hidden category:
This page was last edited on 17 May 2021, at 13:45.
Content is available under Creative Commons Attribution/Share-Alike License; additional terms may apply. See Terms of Use for details.