Democritus was a pre-Socratic Greek philosopher. He was born at Abdera in Thrace and lived from around 460 B.C.E. to 370 B.C.E. Democritus developed atomism which originated with Leucippus. Democritus identified the real existence of the cosmos with infinite numbers of permanent, imperishable, immutable, and indivisible elements called “atomon” (atoms; means “indivisible”), conceived the world as the composite of these material elements, and developed purely mechanical materialism, devoid of any trace of the mythical, which is rare in Greek philosophy.

All atoms are qualitatively homogeneous, different only in form, shape, and size. The qualitative diversity of the world is reduced to and explained by quantitative and physical differences. From physical phenomena to perception and thinking, all phenomena both physical and spiritual were explained by mechanical materialism. This was the first purely materialist thought in the history of Greek philosophy. It is virtually impossible to tell which of these ideas were unique to Democritus, and which were attributable to Leucippus due to a lack of surviving fragments, aside from ascribing the originator to Leucippus and the successor to Democritus.

Details of Democritus’ life are unknown due to a lack of surviving texts. It was known that Democritus produced works on a wide range of subjects, and that Thrasyllus, a first century Roman scholar, arranged his writings which included works on ethics, natural science, mathematics, music, and technical matters. Nothing survived except a limited number of fragments. His atomist ontology and hedonism was succeeded by Epicurus.

Democritus is said to have had a happy disposition, and is sometimes referred to as the "laughing philosopher," as opposed to Heraclitus, who is known as the "weeping philosopher." In the Divine Comedy, Dante sees the shade of Heraclitus in Limbo with those of other classical philosophers. 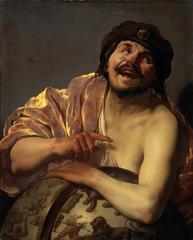 Atoms are in constant motion. Democritus argued for the reality of “void” that gives space for atoms to move. When the atoms move they come into contact with other atoms and form bodies. A thing comes into being when the atoms that compose it are appropriately associated, and passes away when these parts disperse.

This leaves no room for the intelligent direction of things, either by human or divine intelligence, as all that exist are atoms and the void. For Democritus, the entire world is physical material organized by mechanical physical principles.

Democritus argued that atoms only had several properties, particularly size, shape, and mass; all other properties that we attribute to matter, such as color and taste, are merely the result of complex interactions between the atoms in our bodies and the atoms of the matter that we are examining.

Different tastes are a result of differently shaped atoms in contact with the tongue. Smells and sounds are explained similarly. Vision works by the eye receiving "images" or "effluences" that are emanated by bodies. Democritus stated, "Sweet exists by convention, bitter by convention; color by convention; but in reality atoms and the void alone exist." This, of course, means that the senses cannot provide a direct or certain knowledge of reality.

There are two forms of knowledge: one legitimate, one bastard. To the bastard sort belong all the following: sight, hearing, smell, taste, touch. The legitimate is quite distinct from this. When the bastard form cannot see more minutely, nor hear nor smell nor taste nor perceive through the touch, then another finer form must be employed.(Fragment 11)

Democritus gave a materialist interpretation to the soul, which he contends is composed of exceedingly fine and spherical atoms. He holds that, "spherical atoms move because it is their nature never to be still, and that as they move they draw the whole body along with them, and set it in motion."

Democritus identified the good with “pleasantness” and developed a form of hedonism. Pleasantness is achieved by observing justice, controlling desires, and keeping a balance in life. While Democritus held a radical materialism in ontology, he developed a secular idealism in ethics and left a number of maxims for life.

Democritus is also the first philosopher we know of who realized that what we perceive as the Milky Way is the light of distant stars. Other philosophers, including later Aristotle, argued against this. Democritus was among the first to propose that the universe contains many worlds, some of them inhabited:

The following excerpts are from Democritus' extensive writings on ethics, of which little remain: