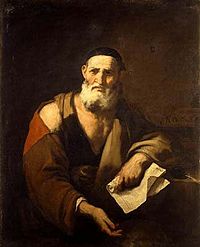 Leucippus or Leukippos (first half of the fifth century B.C.E.) was a pre-Socratic Greek philosopher, and the founder of atomism. Leucippus identified the real existence of the cosmos with infinite numbers of permanent, imperishable, immutable, and indivisible elements called “atomon” (atoms; means “indivisible”), conceived the world as the composite of these material elements, and developed a purely mechanical materialism, devoid of any trace of mythical element, which was rare in Greek philosophy. His ideas were developed by his follower, Democritus.

Nothing was known about his life. Epicurus doubted his very existence, but Aristotle and Theophrastus explicitly credited Leucippus with the invention of atomism. His fame was completely overshadowed by that of his follower, Democritus, who systematized his view on atoms.

There are no existing writings which can be attributed to Leucippus, since his writings seem to have been enfolded into the work of his famous student Democritus. In fact, it is virtually impossible to identify any views about which Democritus and Leucippus disagreed.

Leucippus' lost works were titled Megas Diakosmos (The Great World-System or The Great Order of the Universe) and Peri Nou (On mind). A single fragment of the former survives:

Nothing happens at random (maten), but everything from reason (ek logou) and by necessity.(Diels and Kranz 67 B1)

Leucippus tried to answer two opposing views of reality by Parmenides and Heraclitus. Parmenides identified the real being of the world as a self-subsisting, immutable, immobile being (the One), whereas in Heraclitus' view the world is in an ever-changing process or flux. Leucippus replaced the Parmenidean "One" with an infinite number of minuscule material elements (“atoms”), which were immutable, permanent, and indivisible units of the world, and explained changes by composition and decomposition, motion and constellation of atoms. He believed that all atoms are homogeneous (qualitatively the same), and different only in shapes and sizes. All beings including the soul are the composites of these material units. Leucippus extended the materialist explanation to all phenomena from natural phenomena, to perception and thinking.

His predecessors presented various elements as the real being of the world: “water” by Thales; “air” by Anaximenes; “air,” “fire,” “water,” “earth” by Empedocles, and so on. These elements are not purely material beings but some intermediary existence that is both spiritual and physical. Some introduced a spiritual principle as a part of their cosmology: “love” and “hate” by Empedocles, “nous” (mind or reason) by Anaxagoras. There was always a trace of mythical or spiritual element in their thought.

Leucippus was distinguished from all other pre-Socratics by his radical materialism. He refused and removed mythical or spiritual elements in the concept of atom and gave a mechanical explanation to all phenomena including perception and sense experiences. He was the first Greek philosopher who took materialistic monism.