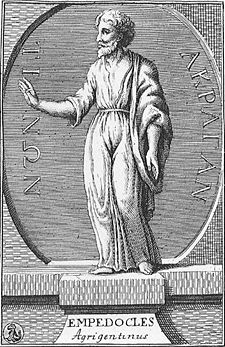 Empedocles conceived the ultimate reality as the unity of four permanent elements which he called “roots”: water, earth, air, and fire. Each element has its distinct characteristics. He taught that these elements are both spiritual and physical, and the principle of love and hate causes the combination and separation of these elements, thereby producing the diversity and changes of the world. His teachings portray love as the principle of unity and hate is that of destruction. Empedocles developed a cyclical cosmology that the cosmos repeats unity and destruction by alternate domination of love and hate.

Empedocles was the first pluralist in Greek philosophy. He was an enigmatic figure with multiple faces as a poet, medical doctor, preacher, mystic, magician, prophet, and a political leader as well as a philosopher.

Empedocles is considered the last Greek philosopher to write in an epic verse and the surviving fragments of his teaching are from his two poems, Purifications and On Nature.

He claimed that by the virtue of the knowledge he possessed he had become divine and could perform miracles. He fought to preserve Greek democracy and allowed that through his teachings others could also become divine. He even went so far as to suggest that all living things were on the same spiritual plane, indicating he was influenced by Pythagorean spirituality. Like Pythagoras, he believed in the transmigration of souls between humans and animals and followed a vegetarian lifestyle.

The legend goes that he died by throwing himself into an active volcano (Mount Etna in Sicily), so that people would believe his body had vanished and he had turned into an immortal god.

The Ultimate Being as the Interactive Unity of the Four Elements

Empedocles attempted to integrate two opposing views of existence developed by Parmenides and Heraclitus. Parmenides conceived the ultimate existence as permanent unchanging being, and Heraclitus as ever changing flow or process. To Empedocles, the Parmenidean view was logically appealing, and the Heraclitian view was in accord with personal experiences.

Empedocles explained diversity and changes of the world, which Heraclitus grasped, as a combination and separation of these four elements. For Empedocles, each element maintains its own nature without change and the degree and ratio of the mixture of the four elements produce diversity.

Love and hate: the principle of unity and destruction

These four elements, however, do not intrinsically possess the principle of change. Empedocles introduced “love” (philia) and “hate” (neikos) as the principle causes of both combination and separation in all things in the world. “Love” combines and “hate” separates. He did not ascribe this emotional principle to any personified existence. The principle of love and hate is rather naturalistic and mechanical. Aristotle noted, based upon his own theory of four causes, that Empedocles was the first philosopher who introduced the efficient cause.

Periodic cycle of the world

Empedocles developed a cyclical cosmology based upon the principle of love and hate. The world regularly repeats four periods:

I. The first period: love dominates; the world is unified; everything is one; there is no separation; symbolized by “sphere.”

II. The second period: hate intrudes into the world and co-exists with love; the unity of the world is broken; elements are separated and the world is diversified.

IV. The fourth period: love becomes dominant again; unity and harmony are restored; the world is restored to a perfection symbolized by “sphere.”

The world repeats a cycle of four epochs again and again as a natural process like the four seasons. The efforts of human beings have no effect upon this process. At the fourth stage, the variety of things in the world we have today is born.

Empedocles integrated the ideas of vortex, spontaneous generation, and the survival of the fittest in his periodic view of the world in order to explain the formation of the cosmos and the development of living things.

He held a broad knowledge that included the medical sciences

Empedocles held a theory of knowledge that is recognized like by like. Recognition is the accordance between an element in us and a like element outside of us.

With our own matter we perceive the earth; with our water, water; with our air, divine air; with our fire, the scorching blaze; with our love, the love of the world; and its hatred, with our own sorry hate. (D.K., 109)

To the elements it came from
Everything will return.
Our bodies to earth,
Our blood to water,
Heat to fire,
Breath to air.