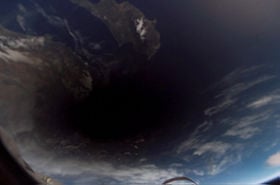 This view from the International Space Station shows the shadow of the Moon cast upon the eastern Mediterranean Sea near Cyprus. NASA image.

An eclipse is an astronomical event that occurs when one celestial object moves into the shadow of another. When an eclipse occurs in a stellar system such as the Solar System, the celestial bodies directly involved in the eclipse form what is known as a syzygy—that is, three or more celestial bodies in the same gravitational system are aligned along a straight line.[1] The object closest to the star is called the occulting object, as it blocks the light of the star as seen from the more distant object.

The term "eclipse" is most often used to describe either a solar eclipse, when the Moon's shadow crosses the Earth's surface, or a lunar eclipse, when the Moon moves into Earth's shadow. However, an eclipse can also refer to similar events beyond the Earth-Moon system. Examples include (a) a planet moving into the shadow cast by one of its moons, (b) a moon passing into the shadow cast by its parent planet, or (c) a moon passing into the shadow of another moon. A binary star system can also produce eclipses if the plane of their orbit intersects the position of the observer.

Eclipses have helped people visualize the relative movements of the celestial bodies involved. In addition, they have provided great opportunities to check theories and gather useful information. For example, the dates of eclipses have been used for the chronological dating of historical records. Also, solar eclipses are opportunities to learn more about the Sun's structure and to observe how the Sun's gravity bends light coming from distant stars, as predicted by the theory of general relativity. Moreover, the timings of eclipses involving the moons of Jupiter have been used to calculate an observer's longitude on Earth.

Umbra and penumbra cast by a solid object occulting a light source.

An eclipse occurs when there is a linear arrangement (syzygy) involving a star and two celestial bodies, such as a planet and a moon. The shadow cast by the object closest to the star intersects the more distant body, lowering the amount of luminosity reaching the latter's surface. The shadow cast by the occulting body is divided into two types of regions:

For spherical bodies, when the occulting object is smaller than the star, the umbra forms a cone whose length L is calculated by the formula:

where Rs is the radius of the star, Ro is the occulting object's radius, and r is the distance from the star to the occulting object. For Earth, on average L is equal to 1.384×106 km, which is much larger than the Moon's semimajor axis of 3.844×105 km. Hence, the umbral cone of the Earth can completely envelop the Moon during a lunar eclipse.[4] If the occulting object has an atmosphere, however, some of the luminosity of the star can be refracted into the volume of the umbra. This occurs, for example, during an eclipse of the Moon by the Earth—producing a faint, ruddy illumination of the Moon even at totality.

An eclipse cycle takes place when a series of eclipses are separated by a certain interval of time. This happens when the orbital motions of the bodies form repeating harmonic patterns. A particular instance is the Saros cycle, which results in a repetition of a solar or lunar eclipse every 6,585.3 days, or a little over 18 years. However, because this cycle has an odd number of days, a successive eclipse is viewed from a different part of the world.[5]

An eclipse involving the Sun, Earth, and Moon can occur only when they are nearly in a straight line, allowing the shadow cast by the Sun to fall upon the eclipsed body. Because the orbital plane of the Moon is tilted with respect to the orbital plane of the Earth (the ecliptic), eclipses can occur only when the Moon is close to the intersection of these two planes (the nodes). The Sun, Earth, and nodes are aligned twice a year, and eclipses can occur during a period of about two months around these times. There can be from four to seven eclipses in a calendar year, which repeat according to various eclipse cycles, such as the Saros cycle. 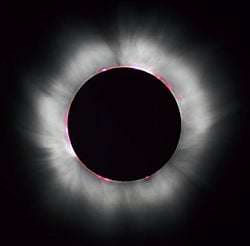 Totality during the 1999 solar eclipse. Solar prominences can be seen along the limb (in red) as well as extensive coronal filaments.

Solar eclipses are relatively brief events that can only be viewed in totality along a relatively narrow track. Under the most favorable circumstances, a total solar eclipse can last for 7 minutes, 40 seconds, and can be viewed along a track that is up to 250 km wide. However, the region where partial totality can be observed is much larger. The Moon's umbra will advance eastward at a rate of 1,700 km/h, until it no longer intersects the Earth. 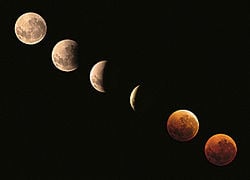 The progression of a lunar eclipse. Totality is shown with the last two images to lower right. These required a longer exposure time to make the details visible.

Lunar eclipses occur when the Moon passes through the Earth's shadow. Since this occurs only when the Moon is on the far side of the Earth from the Sun, lunar eclipses only occur when there is a full moon. Unlike a solar eclipse, an eclipse of the Moon can be observed from nearly an entire hemisphere. For this reason it is much more common to observe a lunar eclipse from a given location. A lunar eclipse also lasts longer, taking several hours to complete, with totality itself usually averaging anywhere from about 30 minutes to over an hour.[9]

There are three types of lunar eclipses:

Total lunar eclipses pass through all three phases. Even during a total lunar eclipse, however, the Moon is not completely dark. Sunlight refracted through the Earth's atmosphere intersects the umbra and provides a faint illumination. Much as in a sunset, the atmosphere tends to scatter light with shorter wavelengths, so the illumination of the Moon by refracted light has a red hue.[9] 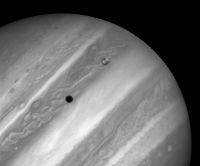 A picture of Jupiter and its moon Io taken by Hubble. The black spot is Io's shadow.

Eclipses are impossible on Mercury and Venus, which have no moons. However, both have been observed to transit across the face of the Sun. There are on average 13 transits of Mercury each century. Transits of Venus occur in pairs separated by an interval of eight years, but each pair of events happen less than once a century.[10]

On Mars, only partial solar eclipses are possible, because neither of its moons is large enough, at their respective orbital radii, to cover the Sun's disc as seen from the surface of the planet. Eclipses of the moons by Mars are not only possible, but commonplace, with hundreds occurring each Earth year. On rare occasions, Deimos is eclipsed by Phobos.[11] Martian eclipses have been photographed from both the surface of Mars and from orbit.

The gas giant planets (Jupiter,[12] Saturn,[13] Uranus,[14] and Neptune)[15] have many moons and are thus frequently involved in eclipses. The most striking eclipses involve Jupiter, which has four large moons and a low axial tilt, making eclipses more frequent as these bodies pass through the shadow of the larger planet. Transits occur with equal frequency. It is common to see the larger moons casting circular shadows on Jupiter's cloudtops.

The eclipses of the Galilean moons by Jupiter became accurately predictable once their orbital elements were known. During the 1670s, it was discovered that these events were occurring about 17 minutes later than expected when Jupiter was on the far side of the Sun. Ole Rømer deduced that the delay was caused by the time needed for light to travel from Jupiter to the Earth. This understanding was used to obtain the first estimate of the speed of light.[16]

With the other three gas giants, eclipses occur only at certain periods during the planet's orbit, due to the higher inclination between the orbits of the moons and the orbital plane of the planet. The moon Titan, for example, has an orbital plane tilted about 1.6° to Saturn's equatorial plane. But Saturn has an axial tilt of nearly 27°. The orbital plane of Titan crosses the line of sight to the Sun at only two points along Saturn's orbit. As the orbital period of Saturn is 29.7 years, an eclipse is possible only about every 15 years.

The timing of the Jovian satellite eclipses was also used to calculate an observer's longitude on the Earth. By knowing the expected time when an eclipse would be observed at a standard longitude (such as Greenwich), the time difference could be computed by accurately observing the local time of the eclipse. The time difference gives the longitude of the observer because every hour of difference corresponded to 15° around the Earth's equator. This technique was used, for example, by Giovanni D. Cassini in 1679, to re-map France.[17]

Pluto, with its proportionately large moon Charon, is also the site of many eclipses. A series of such mutual eclipses occurred between 1985 and 1990.[18] These daily events led to the first accurate measurements of the physical parameters of both objects.[19]

A binary star system consists of two stars that orbit around their common center of mass. The movements of both stars lie on a common orbital plane in space. When this plane is very closely aligned with the location of an observer, the stars can be seen to pass in front of each other. The result is a type of extrinsic variable star system called an eclipsing binary.

The first eclipsing binary star system to be discovered was Algol, a star system in the constellation Perseus. Normally this star system has a visual magnitude of 2.1. However, every 20.867 days, the magnitude decreases to 3.4 for more than 9 hours. This is caused by the passage of the dimmer member of the pair in front of the brighter star.[21] The concept that an eclipsing body caused these luminosity variations was introduced by John Goodricke in 1783.[22]