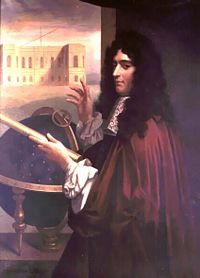 Giovanni Domenico Cassini (June 8, 1625 – September 14, 1712) was an Italian-French astronomer, engineer, and mathematician who was the first to observe four of Saturn's moons. He compiled tables of the moons of Jupiter, which were used to synchronize the computation of terrestrial longitude and more accurately measure the circumference of the Earth. He also attempted to measure the size of the Solar System by estimating the distance between the Earth and Mars. 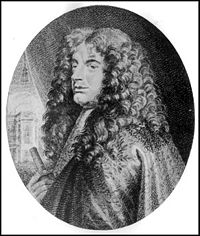 Cassini was born in Perinaldo, near Sanremo, at that time in the Republic of Genoa. His father was James Cassini, who first assigned a tutor to assist in Cassini's education, and later sent the young man to study theology and law under the Jesuits in Genoa. In 1646, the Jesuits published a book of poetry that included some of Cassini's work.

Cassini was early introduced to astronomy through a text devoted to astrology, and soon he was very knowledgeable about it. Strangely enough, it was this knowledge that led to his first appointment.

In 1644, the Marquis Cornelio Malvasia, who was a senator of Bologna with a great interest in astrology, invited Cassini to Bologna and offered him a position in the Panzano Observatory, which he was constructing at that time. Most of their time was spent calculating newer, better, and more accurate ephemerides for astrological purposes, using the rapidly advancing astronomical methods and tools of the day. At the age of 25, Cassini was appointed by the senate to the post of astronomer at the newly completed observatory, where he remained from 1648 to 1669. During this time he also served as professor of mathematics at the University of Bologna.

When Cassini arrived in Bologna, one of his first tasks was to improve the measurement of the meridian line passing through the Cathedral of Saint Petronius. He not only accomplished this but also constructed additional astronomical instrumentation, completed in 1655. The primary purpose of this undertaking was to fix the religious feasts of the Roman church at the right time of year. Cassini also redrew the meridian line passing through the cathedral according to his own observations.

Cassini published solar tables, and calculated the parallax of the Sun, the arc subtended by the disk of the Earth were it observed from the Sun. This, in combination with the same measurement of the Sun from the Earth, could yield comparative measurements of the two bodies. Cassini's measurements were not, however, particularly accurate, and his conclusion that the Sun was about a million times larger than the Earth was found to be on the high side.

During his time in Bologna, Cassini established an international reputation by his many accomplishments. In 1652, he penned an account of the appearance of a comet. The motions of comets were believed not to be governed by any particular law, yet Cassini attempted to establish the orbit of the comet that appeared in 1664 from a few observations, using procedures pioneered by Johannes Kepler. Not being a proponent of the heliocentric views of Nicholas Copernicus and Kepler, he assumed the earth to be stationary, and conjectured that the star Sirius was the center of the comet's motion.[1]

In 1657, Cassini was asked to accompany the ambassador to the Roman pontiff from Bologna on a trip to Rome, in order to settle a dispute between the city states of Bologna and Ferrara regarding the two major river systems that they shared. He showed marked skills as a diplomat, and was asked to remain in Rome to undertake a number of public works, including the repair of Fort Urban and other fortifications. Pope Clement IX was so impressed with Cassini that he encouraged the astronomer to become an ecclesiastic, but Cassini resisted this invitation. He did, however, become superintendent of the waters in the papal estates.

In 1664, Cassini observed the red spot on the surface of Jupiter, and, by recording its movement, was able to estimate the jovian day to be nine hours and 56 minutes. He also estimated the period of rotation of other planets and the Sun. The last of these, by his estimate, was 27 days—a figure not far from later, more accurate estimates (25 days).

Cassini was the first to compile tables of the eclipses of Jupiter's moons for the purpose of measuring longitude by the method suggested by Galileo, using eclipses of the satellites as a clock. He published these tables in 1668. If two observers at different locations measure the position of the stars at the same moment, they can compute the angular difference between them, and thus the longitude. The problem is knowing if the two observers are making their measurements at exactly the same time. The position of the moons of Jupiter can serve as just such a clock that can be observed by both parties, and the tables of Jupiter's moons were made up for this purpose.

In 1669, King Louis XIV of France, anxious to obtain Cassini's employ at a new observatory in Paris, offered the astronomer a handsome pension that was competitive with his income at Bologna. Cassini hesitated to accept the post until he could gain the approval of the pope and the Bolognese government, which was forthcoming on the condition that he would return in two years. These conditions were eventually dropped, and Cassini thoroughly adopted his new country, to the extent that he became interchangeably known as Jean-Dominique Cassini—although that is also the name of his great-grandson. He was appointed director of the Paris observatory in 1671, and remained so until his death.

In 1673, he became a French citizen. While in France, Cassini also served as the court astronomer/astrologer of the Sun King for forty-one years, serving the expected dual role yet focusing the overwhelming majority of his time on astronomy rather than the astrology he had studied so much of in his youth.

Two important tasks that involved Cassini and his crew of astronomers and measurement-takers were map-making and determining longitude. Cassini instituted a project to map the world, and was assisted in this venture by many of the world's leading observatories. These reported their observations to the Paris observatory under Cassini's direction, where they were tabulated and translated into a map projection that was viewed favorably by Louis XIV.

During the 1670s and 1680s, Cassini sent out several expeditions to different parts of the world to undertake astronomical observations with varying success. One problem these teams confronted was the change in the periods of pendulums when brought to different latitudes. This problem was not solved with great success, and the teams themselves, having no communication with their home base in Paris sometimes for years at a time, had to improvise their own solutions.

In 1672 Cassini sent his colleague Jean Richer to Cayenne, French Guiana, while he himself stayed in Paris. The two made simultaneous observations of Mars and thus found its parallax to determine its distance, thus measuring for the first time the true dimensions of the Solar System.

Around this time, Cassini began work on a project to create a topographic map of France, using Reiner Gemma Frisius's technique of triangulation. The project was continued by his son Jacques Cassini and eventually finished by his grandson Cassini de Thury and published as the Carte de Cassini in 1789[2] or 1793.[3] It was the first topographic map of an entire country.

Cassini discovered the zodiacal light in 1683, a mild illumination seeming to emanate from the direction of the sun toward the ecliptic just before sunrise and after sunset. In 1684, he was the first to observe four of Saturn's moons, which he called Sidera Lodoicea; The first had been discovered by Christiaan Huygens. Around 1690, Cassini was the first to observe differential rotation within Jupiter's atmosphere.

In 1701, Cassini and his son undertook to measure the arc of longitude between Paris and Collioure, a small village in France near the border of Spain. This and other measurements were used to confirm Isaac Newton's contention that the earth was not perfectly spherical, but rather, slightly flattened at its poles.[4] For much of the rest of the decade, Cassini was involved in cartographic work.

Cassini died at the Paris observatory on September 14, 1812.

Cassini was primarily a mathematician and measurement taker, but left little in the way of theory with which to assimilate his many observations. He was also an excellent administrator and an engineer. He made important discoveries, but was oddly attached to the outdated theories of Ptolemy on the organization of the solar system, and had trouble embracing the Copernican revolution.

This odd mix of characteristics did not in the end diminish his stature. His colleague, Ole Rømer, was able to take his tables of the moons of Jupiter and, with additional observations, conclude that light propagates at a finite speed. Cassini's organizational skills put the Paris Observatory at the center of a worldwide effort to map the Earth. He may not have been a great theorist, but in the end he planted a legacy that future researchers would build upon.