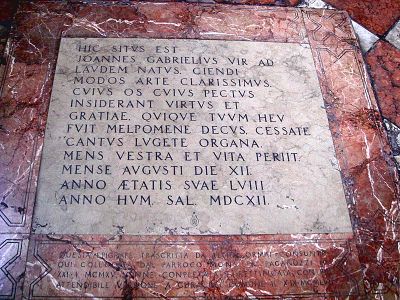 Giovanni Gabrieli (c.1554 to 1557 – August 12, 1612) was an Italian composer and organist. He was one of the most influential musicians of his time, and represents the culmination of the style of the Venetian School, at the time of the shift from Renaissance to Baroque idioms in music.

He used his extensive knowledge of counterpoint in composing toccatas, canzonas, fugues, sonatas, and instrumental music to rouse personal and spiritual qualities in his listeners, aiding them in achieving their individual transformations. Applying theoretical innovations in counterpoint, ornamentation, and improvisation, he created numerous madrigals that inspire exciting musical emotions like that of no other musician of this time.

Gabrieli was most likely born in Venice. He was one of five children, and his father came from the town of Carnia to Venice shortly before Giovanni's birth. While not much is known about Giovanni's early life, he probably studied with his uncle, the composer Andrea Gabrieli. He may indeed have been brought up by him, as is implied in some of his later writing. He also went to Munich to study with the renowned Orlando de Lassus at the court of Duke Albrecht V. Most likely he stayed there until about 1579.

By 1584, he had returned to Venice, where he became principal organist at the church of San Marco di Venezia in 1585, after Claudio Merulo left the post; and following his uncle's death the following year also took the post of principal composer. Also after his uncle's death he took on the task of editing much of his music, which would otherwise have been lost; Andrea evidently had had little inclination to publish his own music, but Giovanni's opinion of it was sufficiently high that he devoted a lot of his own time to compiling and editing it for publication.

Gabrieli's career rose further when he took the additional post of organist at the Scuola Grande di San Rocco, another post he retained for his entire life. San Rocco was the most prestigious and wealthy of all the Venetian confraternities, and second only to San Marco itself in splendor of its musical establishment. Some of the most renowned singers and instrumentalists in Italy performed there and a vivid description of the music there survives in the travel memoirs of the English writer Thomas Coryat. Much of his music was written specifically for that location, although it was probably less than he composed for San Marco.

San Marco had a long tradition of musical excellence and Gabrieli's work there made him one of the most noted composers in Europe. The vogue which began with his influential volume Sacrae symphoniae (1597) was such that composers from all over Europe, especially from Germany, came to Venice to study. Evidently he also made his new pupils study the madrigals being written in Italy, so not only did they carry back the grand Venetian polychoral style, but also the more intimate madrigalian style to their home countries; Hans Leo Hassler, Heinrich Schütz, Michael Praetorius and others helped transport the transitional early Baroque music north to Germany, an event which was decisive on subsequent music history. The productions of the German Baroque, culminating in the music of J.S. Bach, were founded on this strong tradition which had its original roots in Venice.

Gabrieli was increasingly ill after about 1606, at which time church authorities began to appoint deputies to take over duties he could no longer perform. He died in 1612, of complications from a kidney stone.

His sonatas for antiphonal brass ensembles remain masterworks in the genre. He was one of the first composers to dilineate dynamics in his pieces and his Sonate pian e forte for antiphonal brass choirs was one if the first compositions to designate dynamics (degrees of loud and soft.) By composing music for two or three ensembles that would be situated in varying positions with a given performing space, he would create vistas of sound that would achieve a homogeneous sonority in spite of the physical distances that might separate the ensembles. His ingenious methods of polyphonic writing allowed for a sense of "oneness" and order to be manifested in these works. 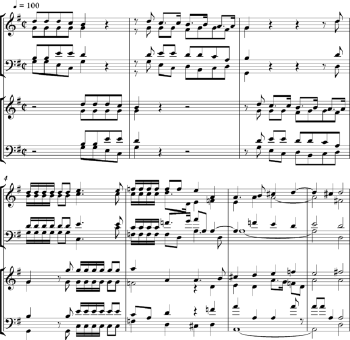 Canzon Septimi Toni No. 2, a piece for two antiphonal choirs of four instruments each

Like composers before and after him, he would use the unusual layout of the San Marco church, with its two choir lofts facing each other, to create striking spatial effects. Most of his pieces are written so that a choir or instrumental group will first be heard from the left, followed by a response from the musicians to the right (antiphon). While this polychoral style had been extant for decades—possibly Adrian Willaert was the first to make use of it, at least in Venice—Gabrieli was the first to use carefully determined groups of instruments and singers, with precise directions for instrumentation, and in more than two groups. The acoustics were such in the church—and they have changed little in four hundred years—that instruments, correctly positioned, could be heard with perfect clarity at distant points. Thus instrumentation which looks strange on paper, for instance a single string player versus a large group of brass instruments, can be made to sound, in San Marco, in perfect balance.

In particular, his arguably best-known piece, 'In Ecclesiis', is a showcase of such polychoral techniques, making use of four separate groups of instrumental and singing performers, underpinned by the omnipresent Organ and Continuo.