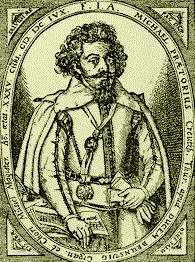 Michael Praetorius (February 15, 1571 – February 15, 1621) was a German composer, organist, and writer on music. He was one of the most versatile composers of his age, being particularly significant in the development of musical forms based on Protestant Reformation hymns.

He was born Michael Schultze in Creuzburg and studied in Torgau, Frankfurt (Oder) and Zerbst. He was organist at the Marienkirche in Frankfurt before working at the court in Wolfenbüttel as organist and (from 1604) Kapellmeister. From 1613 to 1616 he worked at the Saxony court at Dresden, where he was exposed to the latest Italian music, including the Venetian polychoral style works of the Venetian School. His subsequent development of the form of the chorale concerto, particularly the polychoral variety, resulted directly from his familiarity with the music of such Venetians as Giovanni Gabrieli.

Praetorius was a tremendously prolific composer, his works showing the influence of contemporaries Samuel Scheidt and Heinrich Schütz as well as the Italians. His works include the nine volume Musae sioniae (1605-10), a collection of over a thousand chorale and song arrangements; many other works for the Lutheran church; and Terpsichore (1612), a compendium of over 300 instrumental dances, which is both his most widely-known work, as well as his sole surviving secular work. His three volume treatise Syntagma musicum (1614-20) is a detailed text on contemporary musical practices and musical instruments, and is an important document in musicology, organology and the field of authentic performance. (See Praetorius for other composers called Praetorius.)

Retrieved from https://www.newworldencyclopedia.org/p/index.php?title=Michael_Praetorius&oldid=1086499
Categories:
Hidden category:
This page was last edited on 9 November 2022, at 17:08.
Content is available under Creative Commons Attribution/Share-Alike License; additional terms may apply. See Terms of Use for details.