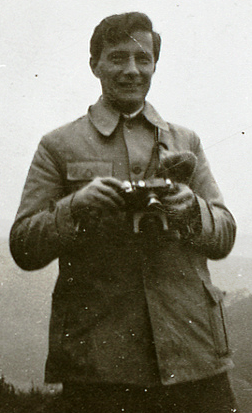 Michael Polanyi (born Polányi Mihály) (March 11, 1891 – February 22, 1976) was a Hungarian–British polymath whose thought and work extended across physical chemistry, economics, and philosophy. He was a Fellow of the Royal Society and a Fellow of Merton College, Oxford. Together with John Baker, Polanyi founded the Society for Freedom in Science and opposed the Soviet Union's socialist rule over the sciences.

Polanyi was born into a Jewish family. His older brother Karl is known as an economist. Their father was an engineer and entrepreneur whose volatile fortune gained building railways perhaps encouraged Polanyi to seek a career in medicine. He graduated in 1913, and shortly afterward served as a physician in the Austro-Hungarian army during World War I, but was hospitalized. During his convalescence he wrote what, in 1917, became a doctorate study in physical chemistry from the University of Budapest (supervised by Gusztáv Buchböck).

In 1920, he emigrated to Germany, eventually ending up as a research chemist at the Kaiser Wilhelm Institute for Fiber Chemistry in Berlin. There, he married Magda Elizabeth in a Roman Catholic ceremony. In 1929, Magda gave birth to a son, John, who went on to win a Nobel Prize in chemistry. With the coming to power in 1933 of the Nazi party, Polanyi accepted the offer of a chair in Physical Chemistry at the University of Manchester. Because his interests later shifted from chemistry to economics and philosophy, Manchester created a new chair in Social Science (1948-1958) for him.

In 1921, Polanyi laid the mathematical foundation for fiber diffraction analysis.

In 1934, Polanyi, at about the same time as G. I. Taylor and Egon Orowan, realized that the plastic deformation of ductile materials could be explained in terms of the theory of dislocations developed by Vito Volterra in 1905. The insight was critical in developing the field of solid mechanics.

From the mid-1930s, Polanyi began to articulate his opposition to the prevailing positivist philosophy of science, arguing that it failed to recognize the part which personal commitment and tacit knowing play in science. Polanyi stands out among philosophers of science according to the extent of his scientific training and by the amount of scientific research he carried out.

Polanyi opposed the state rule of the sciences and disputed with John Desmond Bernal who supported the Soviet Union and its socialist policy on science. He pointed to what happened to genetics in the Soviet Union, once the doctrines of Trofim Lysenko were deemed politically correct. Polanyi, like his friend Friedrich Hayek, supplied reasons why a free society is preferable, arguing that academic freedom was a fundamental necessity for the production of true knowledge. Together with John Baker, Polanyi founded the Society for Freedom in Science to defend this view in the public sphere.

Polanyi embraced the existence of objective truth.[1] However, he criticized the notion that there is something called the scientific method which enables science to supply truths in a mechanical fashion.

Instead, he argued that all knowing is personal, and as such relies upon fallible commitments. One's skills, biases, and passions are not flaws but play an important and necessary role in discovery and validation. Observers cannot remove themselves from their observations and judgments, nor should they; it is enough that people act in accordance with the consequences imposed upon them by their beliefs. What saves this claim from relativism is his belief that one's tacit awareness connects one with realities, although as tacit awareness relies upon assumptions acquired within a local context, one cannot simply assume that they have universal validity; one must rather be open to the possibility of error while seeking to identify objective truths. Any process of articulation, however, inevitably relies upon that which has not been articulated. Indeed, reliance upon what people have not articulated is how words become meaningful; that is, meaning is not reducible to a set of rules; it is grounded in one's experience of the world—where experience is not something that can simply be reduced to collections of sense data.

Polanyi acknowledged the role played by inherited practices (tradition). The fact that we know more than we can clearly articulate contributes to the conclusion that much knowledge is passed on by non-explicit means, such as apprenticeship (observing a master, and then practicing under the master's guidance).

Polanyi's philosophical ideas are most fully expressed in the Gifford lectures he gave in 1951-1952 at the University of Aberdeen, published as Personal Knowledge. These ideas later influenced the thought and work of Thomas Kuhn and Paul Feyerabend.

People are not often aware of the tacit knowledge they possess or how it can be valuable to others. Tacit knowledge is considered more valuable because it provides the context for people, places, ideas, and experiences. Effective transfer of tacit knowledge generally requires extensive personal contact and trust.

Polanyi argued that knowing always had an indispensable personal component. With this he critiqued the objectivist position of which he was deeply concerned about a lack of ethical commitment or considerations. Building on general ideas from Gestalt-psychology he described a difference between two kinds of awareness: Subsidiary and focal awareness. In focal awareness, one is aware of a coherent whole, a Gestalt. In subsidiary awareness, one is implicitly conscious of the different impressions, memories that build this Gestalt. This Gestalt is not given, but it is an achievement, realized by interpretative skills.

The whole notion of explicit knowledge as something that could be captured in an information system is at odds with this interplay between subsidiary and focal awareness. The tacit can be known but only in terms of the Gestalt that it bears on. The explicit is gone in the next moment, when a new Gestalt is formed in the focal awareness.

Polanyi described this interplay between subsidiary and focal awareness as indwelling. People indwell their interpretative frameworks so that they order and select their impressions. People indwell their integrative skills so that they focus on what they want to achieve and their bodily skills implement what is needed. The focus is a Gestalt that is produced from the subsidiary particles, just as it is something that summons bodily skills.

Brohm explains this process of indwelling in terms of a stage metaphor.[2] On the stage there is a focus in the play, an event in the theater play (that is, focal awareness), pointed at by the spotlight. Around the light circle on the stage there are actors, attributes (that is, impressions). It is the director that has arranged the parts in such a way that the whole emerged from its parts (that is, integrative skills).

The main benefit of this stage metaphor is that it counters the popular metaphor of the iceberg (the subconscious/tacit under water, the explicit above water). The metaphor shows the dynamics and interdependence between explicit and tacit knowledge.

The implications of such a reading of Polanyi are manifold. Firstly, true discovery comes from an intention to be submerged in the phenomena under study, thereby emphasizing participatory observations as a method. Secondly, there is no knowledge transfer, but it is possible to indwell the actions from a master in order to gradually reconstruct skills. Thirdly, knowledge and ethics are inherently connected. There is no neutral knowledge. Any claim to knowledge reflects a particular standpoint, interpretative framework, and so on, as there is no explicit knowledge that is simply given. Fourthly, since everyone has a personal history, a particular education and socialization there can be quite different perspectives. But the problems in organizations or societies can be so complex that different perspectives are relevant. In such a case organizing should be an emergent process to allow for differences and even make use of that. Such a constellation Polanyi named polycentric order.

In his 1951 collection of essays, The Logic of Liberty, Polanyi applied his philosophy of science to economics. He elaborated on these ideas in a 1962 article.[3] Polanyi extrapolated his conclusions about the structure of liberty from within the context of science.

Polanyi noted that scientists cooperate with each other, or "self coordinate," in a way similar to the way in which economic agents coordinate their activities in a free market. Even though each scientist pursues his own goals, the scientist reacts to the limited available knowledge produced by nearby, relevant actors. However, the dedicated communities of scientists are formed by a commitment to truth that transcends the market. Other examples of dedicated communities is the pursuit of justice within the legal community as an end which transcends the rewards of the market. Because ends such as truth and justice transcend our ability to wholly articulate them, a society which gives these communities the freedom to pursue these ends is desirable. Scientists, like entrepreneurs, require the freedom to pursue discoveries and react to the claims made by their peers. In The Republic of Science, Polanyi thus urged societies to allow science to be pursued for its own sake:

…[S]cientists, freely making their own choice of problems and pursuing them in the light of their own personal judgment, are in fact cooperating as members of a closely knit organization…

Such self-co-ordination of independent initiatives leads to a joint result which is unpremeditated by any of those who bring it about. Their co-ordination is guided as by an "invisible hand" towards the joint discovery of a hidden system of things. Since its end-result is unknown, this kind of co-operation can only advance stepwise, and the total performance will be the best possible if each consecutive step is decided upon by the person most competent to do so…

Any attempt to organize the group … under a single authority would eliminate their independent initiatives and thus reduce their joint effectiveness to that of the single person directing them from the centre. It would, in effect, paralyse their cooperation.

Polanyi's son, John Charles Polanyi, became a professor of chemistry at the University of Toronto, Canada. In 1986, John Polanyi was awarded the Nobel Prize in Chemistry for his work on the "dynamics of chemical elementary processes."[4] His brother, Karl Polanyi, was a noted economist, and his niece, Kari Polanyi-Levitt, Emerita Professor of Economics at McGill University, Montreal.

The Michael Polanyi Center (MPC), at Baylor University, was the first center at a research university exclusively dedicated to intelligent design study. It was founded in 1999, "with the primary aim of advancing the understanding of the sciences," in a religious context.[5] All of the center's research specifically investigated the controversial subject of intelligent design. The center was merged in late 2000 to the Baylor Institute for Faith and Learning.[6]